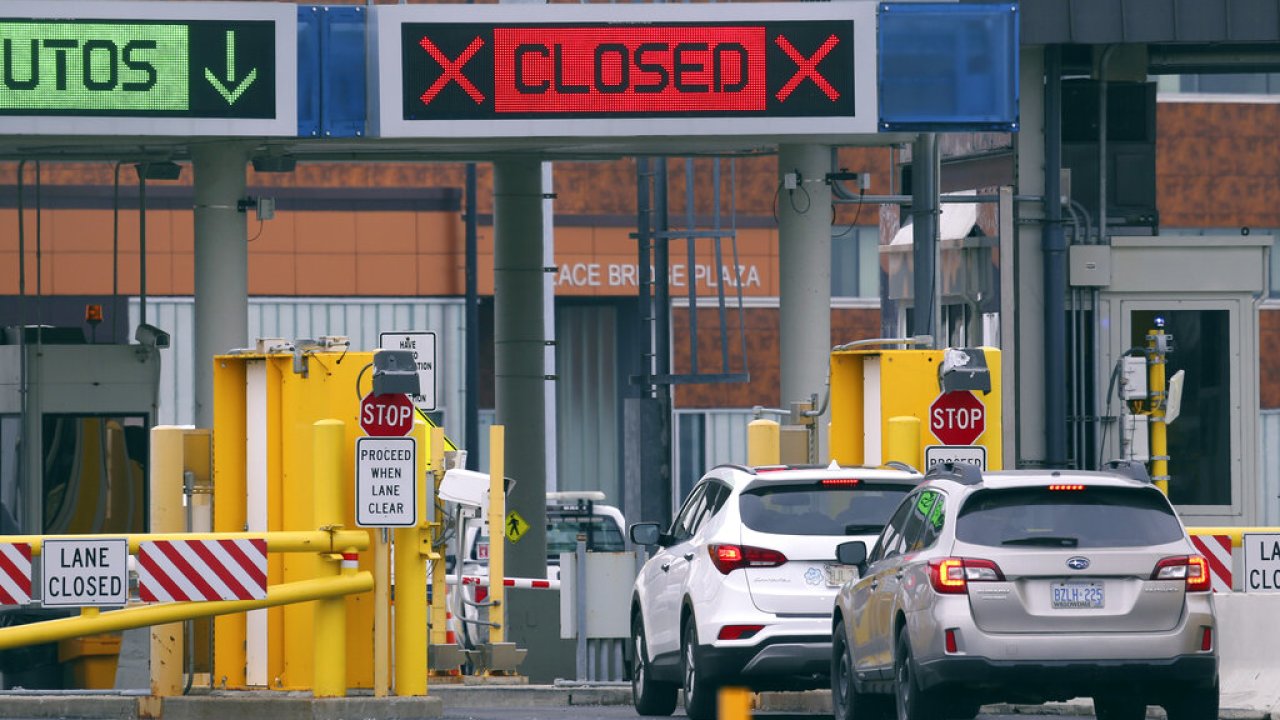 By JaclynOctober 14, 2021News
No Comments

The Surrey Board of Trade is welcoming the U-S announcement that it will re-open its land border with Canada next month to non-essential travellers who are fully vaccinated against COVID-19. Board C-E-O Anita Huberman says the announcement is a great relief for the economies of both Canada and the U-S. But she says many questions still need to answered, including whether those who have received mixed doses of COVID-19 vaccine will be recognized by the U-S as fully vaccinated. She also questions what kind of proof of vaccination will be required and what strategies will be in place to ensure efficient movement of traffic across the border.

Four more people have died due to COVID-19 in B-C, three of them from the Northern Health authority, where health officials have said the vaccination rate is much lower than in other parts of the province. Tofino General Hospital has joined the list of health facilities with outbreaks, bringing to 19 the number of long-term care, assisted-living sites and hospitals affected. Almost 89 per cent of all eligible people 12 and older in the province have had their first dose of vaccine, while 83.4 per cent are fully vaccinated. There are 374 COVID-19 patients in provincial hospitals, including 153 in intensive care units
Community leaders in Point Roberts, Washington say testing requirements for Canadians driving home from the United States could only prolong the hardships for the coastal town. Point Roberts is disconnected from the rest of the state by water and requires residents to drive through Metro Vancouver to access it by land. Brian Calder, president of the Point Roberts Chamber of Commerce, says before COVID-19, the community would see about one and a half million visitors each year, but half of them often spent an hour or less in the town getting cheaper gas, buying groceries or checking on their cabins or boats. When the U-S border reopens to vaccinated Canadians next month, there will be no testing requirement to go south, but Canada requires a negative COVID-19 test to return.

As many eagerly await the reopening of the U.S. border to non-essential travel, many questions about the easing of measures remain. From whether Canadians who have mixed COVID-19 vaccine doses will be allowed in, to whether Canadians even should restart their leisurely trips south, concerns also continue over the pandemic situation in many places in the U.S. The U.S. has not yet announced exactly when it intends to reopen its borders. Though it has been confirmed travelers who have received doses of a vaccine approved either by the World Health Organization or the Food and Drug Administration will be allowed in, it has not been clarified yet if those who have received two different vaccine brands as first and second doses will make the cut. In addition to vaccination requirements, questions also remain as to whether Canadians will be expected to provide proof of a negative COVID-19 test upon return to Canada if, for example, they head south for a day trip — a common thing for those in border communities. Regardless of the details, Freeland says it’s important for Canadians to be careful when the inevitable reopening of the border happens, citing Canada’s growing vaccination rate, which remains higher than America’s.

As people who fled their homes and lost everything await the findings of an investigation into the cause of the Lytton wildfire, the local MLA says those who have been displaced for more than 100 days are just desperate to see their community rebuilt. On Thursday, the Transportation Safety Board will release the results of its investigation into the possibility that a freight train sparked the fire that tore through the village on June 30 leaving few building standing, and two residents dead. Fraser-Nicola MLA Jackie Tegart says the findings may bring closure to some, while for others it might allow them to start the grieving process. The safety board said days after the fire that it sent rail investigators to the scene after receiving information about its possible cause from the RCMP and BC Wildfire Service. A proposed class-action lawsuit filed in B.C. Supreme Court in August alleges the Canadian Pacific and Canadian National railways caused or contributed to the wildfire, although neither company has filed a statement of defense in the case.

A half dozen junior golfers were crowned national champions at Morgan Creek Golf Club last weekend – including one who won on her home turf. Among the winners was Surrey’s Bonnie Zhai, 16, who took top spot in the girls 15-19 division at the Maple Leaf Junior Golf Tour’s National Championship, which ran Oct. 8-11. Zhai, who is a member at Morgan Creek, won the three-round tournament by three strokes; she carded rounds of 77, 72 and 71 for a total of 220 Top junior golfers from across Canada – and in a variety of age groups – competed in the national event, having qualified for the tournament with strong performances at regional Maple Leaf Tour events earlier in the year.

Mounties say three women were attacked from behind in three separate incidents in Surrey between September 27, and October 10, by an unknown man. RCMP are currently investigating the incidents and do not yet know if they’re linked. All three women were able to escape without sustaining any physical injuries, but the RCMP points out incidents like these can have lasting emotional impacts. In each case, a woman was walking alone and was grabbed from behind. The first attack occurred On September 27, at around 5 pm in Bear Creek Park. On the same night, another attack occurred at around 7:30 pm in the 11400 block of Millar Road. The third incident occurred a couple weeks later, on October 10, at around 11:57 pm. This attack occurred on a walking path between 132 Street and Edinburgh Drive. While the RCMP has no evidence that the events are linked, they’re concerned about three similar occurrences taking place within such a short period of time. “We want the public to be aware of these incidents, to maintain a healthy vigilance and report all suspicious activity,” said Corporal Vanessa Mann, Surrey RCMP Media Relations officer, in a statement. “We recognize these incidents can lead to a sense of unease within the community. We want to assure residents that in addition to our on-going investigations we have stepped up patrols in the areas of these incidents.” The Surrey RCMP also put out some safety tips in a media release. They suggest walking with another person when possible, and to be aware of your surroundings. RCMP also suggest to limit distractions, like removing headphones, and storing mobile phones and other valuables out of sight. Finally, they suggest to take routes that are well lit, and populated. Investigators are currently actively working to identify suspects, and are asking anyone with further information to contact Surrey RCMP at 604-599-0502. You can also make an anonymous report through Crime Stoppers at 1-800-222-TIPS, or go to www.solvecrime.ca

New COVID-19 “circuit breaker” restrictions have been announced for the Northern Health region. Provincial Health Officer Dr. Bonnie Henry and Health Minister Adrian Dix made the announcement during a snap press conference on Thursday afternoon. The new restrictions, which are as a result of increased transmission and serious illness, take effect at midnight. “We have thrown everything in but the kitchen sink,” said Minister Dix. Rapid transmission has been able to continue in Northern Health, due to a lower rate of vaccination according to Dr. Henry. She also said the Delta variant was still the primary contributing factor to transmission, and to the increased presence of severe illness. Dr. Henry stressed young people are being affected to a greater degree, driving that point home by revealing that someone in their 20s passed away from COVID-19 today. Expanded restrictions will primarily impact indoor gatherings and will be in effect until at least November 19. Personal gatherings, indoor and outdoor, will be restricted to only fully vaccinated people. Indoor gatherings will remain restricted to five people, and outdoor gatherings to 25 people, again, as long as participants are fully vaccinated. Organized gatherings will require everyone to be fully vaccinated, and masks must be worn. Indoor organized events will be limited to 50 people, and outdoor to 100 people. Again, everyone must be fully vaccinated. Premises which serve food and liquor must close at 10 pm, and venues that only serve alcohol must close completely. Worship services will also be affected, and will be limited to virtual services only. The situation around serious COVID-19 infections in Northern Health has become so severe that ICU patients have needed to be transferred to other health regions. So far, 58 patients in total have been transferred as of Thursday afternoon, according to Dix. BC health officials instituted similar measures in response to a worsening situation in the eastern Fraser Valley in late September. Locations that won’t be affected include Terrace, Kitimat, Haida Gwaii, Prince Rupert, Stikine, Telegraph Creek, Snow Country, and the Nisga’a areas. “These measures are to stop transmission and to save lives,” said Dr. Henry

The Transportation Safety Board is to release the results of its investigation today into the possible relation between train activities and a wildfire this summer in Lytton, B-C. The fire burned through the town on June 30th, killing two people and leaving few buildings undamaged after a heat wave pushed the temperature up to a Canadian record of 49 point 6 Celsius in Lytton. The safety board said in July that it sent investigators to the area to investigate any potential link to trains. Canadian Pacific Railway said in July that it found nothing to indicate that any of its trains or equipment that passed through Lytton caused or contributed to the fire, while C-N Rail said video footage posted on social media after the fire was not connected to Lytton.

Deputy Prime Minister Chrystia Freeland says fully vaccinated or not, Canadians still need to show a negative COVID-19 P-C-R test when they come back into the country from the U-S. Ottawa is facing pressure to drop the requirement. Speaking to reporters in Washington, Freeland pointed out she had her test done in advance of her return home later today. Freeland says we need to remember how much we have all sacrificed in the fight against COVID _ including spending more than 280-billion dollars on business and income supports as well as the suffering of individual Canadians.

BC health officials announced 580 new test-positive COVID-19 cases on Thursday, bringing the total number of recorded cases in the province to 195,766. In a written statement, Provincial Health Officer Dr. Bonnie Henry and Health Minister Adrian Dix said that there are 5,348 active cases of COVID-19 in the province. Of the active cases, 378 individuals are currently hospitalized, 153 of whom are in intensive care. The remaining people are recovering at home in self-isolation.

There have been nine new COVID-19-related deaths over the past 24 hours, for a total of 2,042 deaths in BC. This includes one in Vancouver Coastal Health, five in Interior Health, one in Northern Health and two in Island Health. From October 5 to 11, people not fully vaccinated accounted for 68.0% of cases, and from September 28 to October 11, they accounted for 73.4% of hospitalizations.

Past two weeks, cases hospitalized per 100,000 population after adjusting for age (September 29 to October 12)