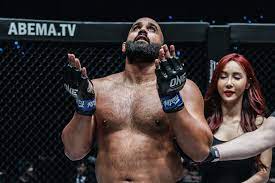 BC RESIDENT IS THE NEW MMA WORLD CHAMPION

By Gurshabad KangMay 18, 2021General
No Comments

Arjan Bhullar is a 34 year old resident of Richmond, BC and also the first South Asian to win the title of MMA World Champion

He was declared the mixed martial arts heavyweight champion of the world this weekend after defeating 5-year reigning champion Brandon Vera, with a second-round technical knockout.

Arjan shared his feelings after his win: “I feel amazing. I feel very fortunate, very blessed and excited for what comes next” he said.

Bhullar has a long record in which he has wrestled for Canada in the Olympics, Commonwealth Games and Pan American Games.

He was inspired by his father to take up wrestling after he became interested in it after immigrating to Canada from India. He says he’s been wrestling since he was in diapers, and the claim is on display in videos of his childhood on his instagram.

“My dad picked it up pretty quick when he got here, didn’t know the language, the family didn’t have much in our pocket, but they knew wrestling.” Arjan remarks.

Bhullar’s MMA coach, Adam Ryan, was regretful that he couldn’t be there with Bhullar in Singapore, where the championship took place due to COVID-19 protocols.

He also shared his sentiments about the win, and commended Bhullar for his dedication and “tremendous foundation” due to his prior experience with wrestling.

This is a proud moment for the Lower Mainland and Canada.