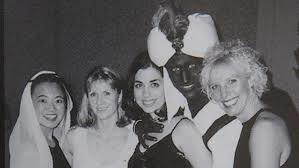 We’re just days into the federal campaign and it’s already getting nasty with the Conservatives releasing a photo of PM Trudeau – while at an event at a private school in Vancouver back in 2001 – wearing what is called, ‘Brownface.’

Perfect timing by the Conservative party.

The fact that Mr. Trudeau has now been found out to have three pictures in the past of him changing the colour of his skin for some event of sorts is unfortunate.

The one that everyone is talking about an Aladdin event that happened in 2001 and Time magazine along with other news sources from around the world have plastered it across the world on the www.

I am a Caucasian man. I have never done what Mr. Trudeau has done three times.

I don’t know how people of any colour other than white are going to react.

I think Mr. Trudeau meant no harm by putting on a “Brownface”.

I am but one vote.