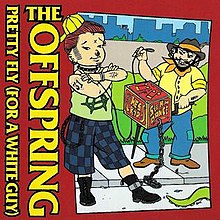 By The WebmasterFebruary 1, 2018News
No Comments

Today’s song Pretty Fly (For a White Guy) by the Offspring came out in 1998 and will stay in your head all day! It a peaked at only #53 on the Billboard Hot 100 Chart but reached #5 on the Canada RPM Chart. It’s kind of a tongue in cheek song as it mocks the portrayal of a white man who likes to act like an African-American stereotype. The song was also downloadable on the video game Rock Band and Guitar Hero.