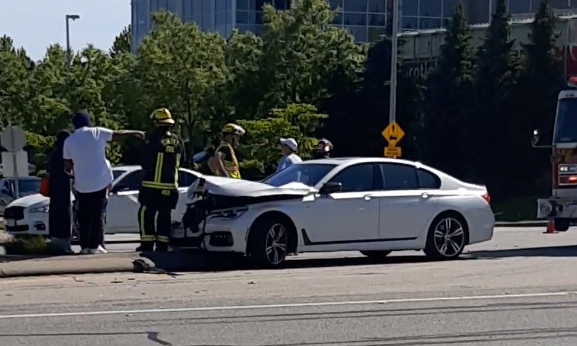 How Many Crashes Is It Going to Take?

On Tuesday there was a car crash outside the Pulse FM studios just off 152 and Highway 10. When I heard about it all I could think was “another day, another crash.”

Luckily nobody was hurt but still, how many of these have to happen before a proper light is installed where all these bangups are taking place?

There’s been at least a dozen crashes and they all happen outside the King of Floors store at 153A Street and Highway 10. Quite a few of the crashes have resulted in deaths. Pulse FM reached out to Surrey RCMP who say they aren’t able to confirm how much crashes there’s been at this spot and what led to all of them, but working at Pulse FM for two years now I have a preeeeeeeetty good hunch.

Check out the photo below.

The problem is people wanting to turn left onto Highway 10 don’t have an actual left turn lane. So, what they do is they try and snake through a left turn lane meant for highway 10 drivers to enter the shopping complex we’re in. Ultimately you’re going the wrong way for 2 – 3 seconds in order to hop onto Highway 10 and continue eastbound into Cloverdale.

To pull this off successfuly, everything has to be timed perfectly, on a highway where people go 100 kph.

Not only do you have to concentrate on snaking through the left turn lane, you have to hope the JoBlow car straight across from you isn’t trying to do the same thing in the opposite direction.

Then there’s the visibility issues. The way the road is set up it’s hard see whether there’s any cars on your right and gauge how fast they’re going. You really don’t know until you’ve pulled out and by that time, are just praying to the traffic gods you make it out alive.

The whole thing is a recipe for disaster, as we continue to see, time and time again. Yes, people shouldn’t be turning left, but people do stupid things and the temptation to turn left is too big for people to ignore, verses having to go to the next light and do a U-turn (which is also illegal) or just try and find a side street and turn around on.

With more and more people moving to Cloverdale, we’re only going to see more attempt the turn in a rush to get home.

Please City of Surrey give us a proper intersection so we can resolve this issue once and for all!