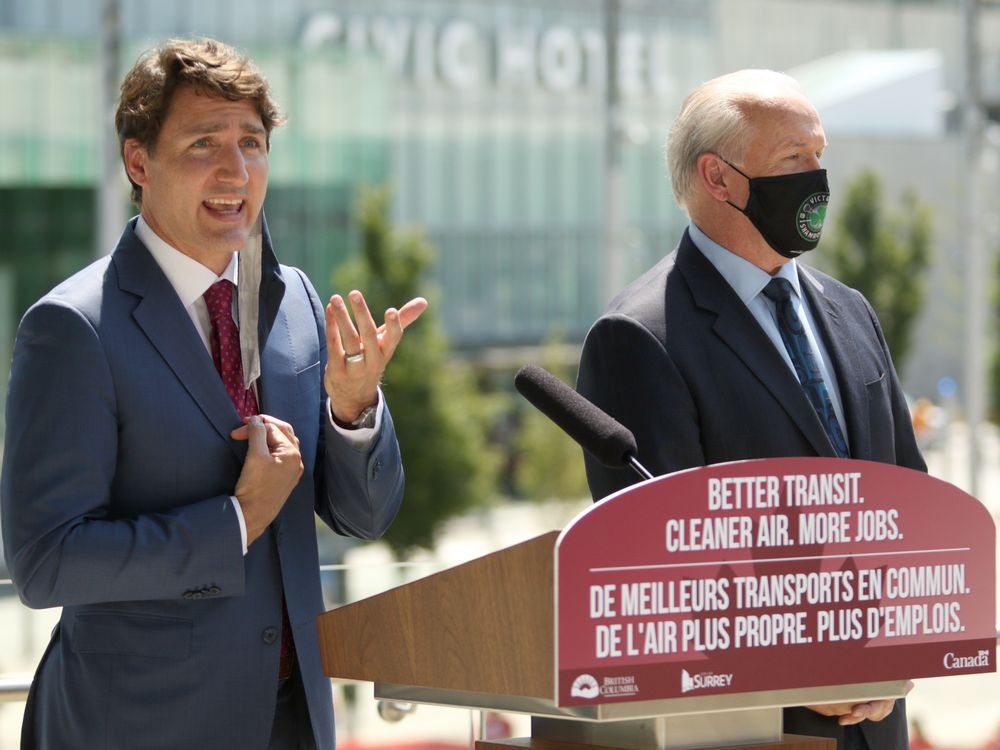 Justin Trudeau in Surrey to Announce $1.3B in Federal Funding for Upcoming Surrey-Langley SkyTrain!

Prime Minister Justin Trudeau was here in Surrey this morning to announce $1.3 billion in new federal funding for the Surrey-Langley SkyTrain, an extension of the Expo Line from Surrey City Centre to Langley Centre in a single phase. Exciting!

“Places south of the Fraser River like Surrey and Langley are growing fast and have been for years. With more families choosing this as home, the demand for goo and efficient transit has gone up,” said Trudeau during the press conference held at Surrey Civic Hall.

“Investing in a major project like the Surrey-SkyTrain extension is also good for the economy. Today’s project alone is expected to create thousands of well-paying jobs, so we’re cutting polluting and creating jobs for the people of BC.”

BC Premier John Horgan said the SkyTrain extension will allow Surrey and Langley “not to chase growth, but to shape growth.”

The provincial government has taken jurisdiction of the Surrey-Langley SkyTrain project from TransLink, and will now lead in its design, procurement, and implementation. Preliminary construction work will begin next week, on Tuesday (DailyHive).

Heavy construction is expected to begin late next year for an estimated completion to be in the middle of this decade.

The project is now estimated to cost $3.84 billion — more than $700 million more than the previous estimate made by TransLink of $3.13 billion. This includes reallocating $1.6 billion in funding previously allocated for the cancelled Surrey Newton-Guildford LRT.

The provincial government, TransLink, and the municipal government will cover the project’s remaining balance of $2.84 billion.

This will be a 16-km-long, elevated extension of the Expo Line eastward along Fraser Highway from the existing King George Station in Surrey City Centre to 203 Street in Langley Centre.

Here is what the new development will consist of:

Upon opening, it will have an initial capacity for 6,800 passengers per hour per direction, with ample room for long-term increases as demand grows. This capacity will be more than 10 times more than the existing bus services along the Fraser Highway corridor.

This new segment of the Expo Line is expected to have a travel time of about 22 minutes, which is over 25 minutes faster than existing buses. On a transfer-less, one-train Expo Line ride from Waterfront Station, it will take 50 minutes to reach 166 Street Station in Fleetwood and about one hour to reach the new terminus at 203 Street in Langley Centre (DailyHive).

“It’s a great time for Surrey! In my 12 years as mayor, I have never been so excited,” exclaimed Surrey Mayor Doug McCallum. “Today is a tremendous for Surrey, we’ve been waiting for a long time of an expansion of SkyTrain in our city. In fact, it has been 27 years since the last time we last put tracks down in our city.”

This fulfills one of the key campaign promises made by McCallum during the 2018 civic election, when he vowed to cancel the street-level LRT project in favour of reviving the original plans for SkyTrain along the Fraser Highway corridor.

“Every new stop built for Surrey-Langley SkyTrain translates to new ridership, and especially less cars on the road,” continued McCallum.

“This rapid transit project will connect people South of the Fraser to more housing, employment, schools services, and encourage higher density, mixed-use development all around the SkyTrain stations.”

What are YOUR thoughts on this news? Join the conversation on social media @Pulse1077!