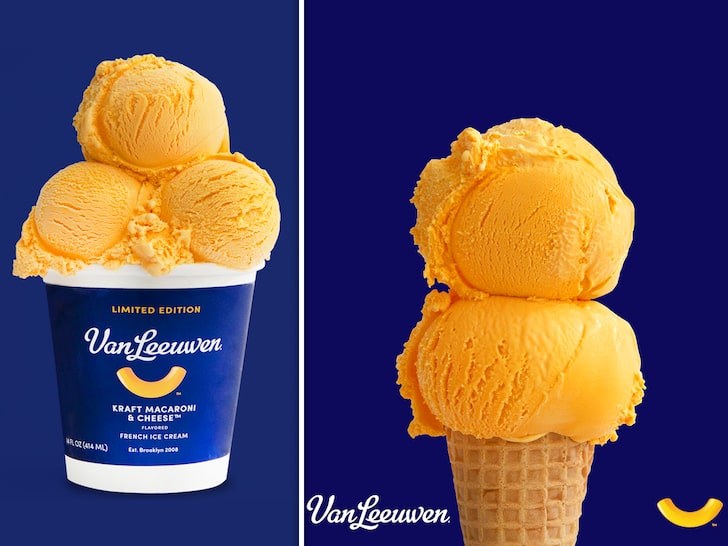 By Kate TattersallJuly 15, 2021General, Kate Tattersall
No Comments
Macaroni and cheese….. ice cream. Just when I thought KD did it all (with the candy flavour mac and cheese mess they released for Valentine’s Day) they release THIS. But hey… maybe it is not as gross as it seems, because the unique flavour sold out in just 60 minutes!!!
Here’s the deal … Kraft and Van Leeuwen Ice Cream joined forces to create a limited-edition mac and cheese ice cream flavour and the demand was so great for the dessert debut, the website crashed within 9 minutes and the entire 2,000 pint inventory was wiped out online within the hour.The ice cream launched Wednesday on National Mac & Cheese Day — yes, that’s a real thing — and, in addition to online sales, they sold it in Van Leeuwen’s brick-and-mortar shops all over America. Well, for a brief period, anyway … we’re told it took only 3 hours to sell out of their 9,000 scoops (TMZ).
“Holes” star Khleo Thomas was one of the lucky ones to get their hands on the $12 pin and says Van Leeuwen totally nailed the Kraft Mac & Cheese flavour, something he says he wasn’t expecting.
For those who missed out, Kraft is actually going to be launching an online sweepstakes with the chance to win 2 free pints… but to my understanding it has yet to come to Canada.
If this product WAS available here in Canada, would you try it? Join the conversation on Facebook by following @Pulse1077!
-Kate
Share Tweet Share Pin