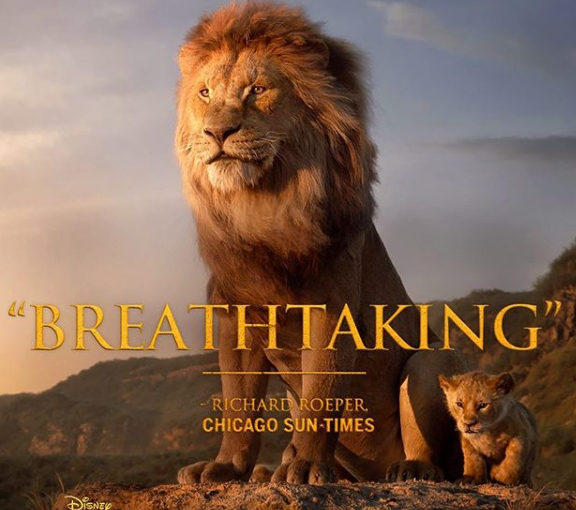 The Lion King hits theatres tonight and is getting for the most part, good reviews, although it received a disappointing 55% on Rotten Tomatoes.

“Even if it were good, the best this movie could have hoped for was to be an imitation of something that was already perfect to begin with” says one review.

Another goes on to say “Some of these remakes have been more inspired than others, but few have felt quite as futile as The Lion King. This isn’t the circle of life; it’s more like a creative dead end.” Ouch!

Regardless of the haters, the movie is still worth seeing simply for the beautiful visual effects and heart-warming message of rising above obstacles.

The film stars Donald Glover as Simba, Beyonec as Nala, Billy Eichner as Timon an Seth Rogen as Pumba and John Oliver as Zuzu the bird and will include a modern take on the classic Lion King songs like ‘Just Can’t Wait to be King’, ‘Can You Feel the Love Tonight’ and the classic ‘Hakuna Matata’

In a recent interview Glover and Rogan aka Timon and Pumba say they tried their best to respect the original while still putting their own stamp on the iconic tune.

Meanwhile, Donald Glover, who plays the adult Simba, says one of the main messages of the key that resonates with audiences worldwide is to not let trauma destroy your whole life.

A huge star of the movie is of course Beyonce who last week released the single ‘Spirit’ that will be on the Lion King album set to be released tomorrow, July 19th. Like most people, Lion King Director Jon Favreau says he was in awe of Beyonce during the making of the film.

What about you? Do you think you’ll go and see the film? Join the conversation at 107.7 Pulse FM!