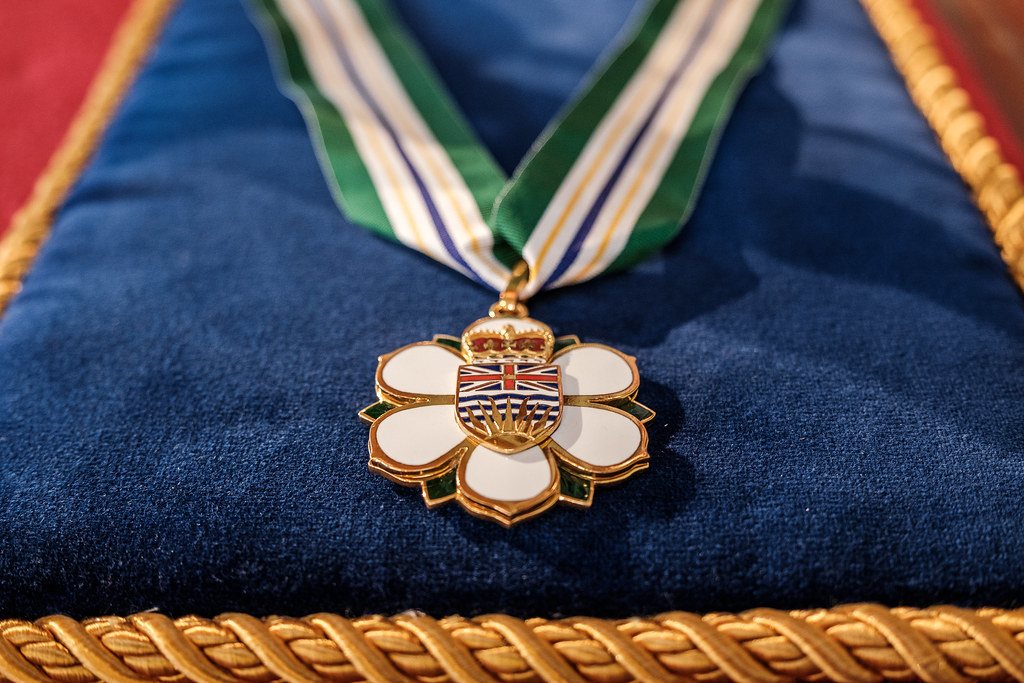 By Vanessa YbarraMarch 21, 2022Community
No Comments
Nominations are being accepted for the Order of British Columbia, the Province’s highest honour.

British Columbians who have demonstrated outstanding achievement, excellence or distinction in a field of endeavour benefiting people in the province or elsewhere are eligible for nomination.

“A nomination for the Order of British Columbia is a wonderful way to recognize the best and brightest individuals in B.C. It’s a way to thank and celebrate them for their service and mark their legacy and contributions in making our province a better place,” said Janet Austin, B.C.’s lieutenant governor and chancellor of the Order of British Columbia. “If you know someone who has made a positive impact in our province, I encourage you to nominate them.”

Nominations will be reviewed by an independent advisory council, chaired by the chief justice of British Columbia. Nominations must be received by the Honours and Awards Secretariat by Monday, April 4 to be considered for 2022.

“In these challenging times, it is more important than ever to recognize those who are going above and beyond to make British Columbia a better place for everyone,” said Premier John Horgan. “If you know an extraordinary British Columbian who is making a difference in the lives of others, their community and our province, nominate them now for the Order of British Columbia.”

In addition to the Order of B.C., people may nominate individuals for the Province’s other honour: the Medal of Good Citizenship. The medal recognizes citizens for their exceptional long-term service and contributions to their communities without expectation of remuneration or reward. The medal reflects their generosity, service, acts of selflessness and contributions to community life. Nominations for the Medal of Good Citizenship are accepted year-round.

The Order of B.C.: https://www2.gov.bc.ca/orderofbc

For a French translation: https://news.gov.bc.ca/26110#translations

Established in 1989 by statute, the Order of British Columbia represents the highest form of recognition the Province can extend to its citizens. Since its inception, 475 British Columbians have been appointed to the order.

Appointments to the order are made annually to the most outstanding British Columbians. To be considered for 2022, nominations and letters of support for the Order of British Columbia must be received by Monday, April 4, 2022, at the Honours and Awards Secretariat office: bchonoursandawards@gov.bc.ca

Any resident of B.C. or former long-term resident who has demonstrated outstanding achievement, excellence or distinction in a field of endeavour provincewide is eligible to be nominated. Fields of endeavour may include community leadership, business, labour, industry, art, sports, volunteer service, professions and other occupations.

Federal, provincial and municipal elected representatives are not eligible for appointment to the order while they remain in office. A person may not be appointed to the order posthumously.

Anyone can nominate an individual whom they feel is worthy of this acknowledgement and honour. Appointments will be made by the lieutenant governor in council on the recommendation of the advisory council, an independent council chaired by the chief justice of British Columbia. The head of the order is the lieutenant governor of B.C.

The Insignia of the Order of B.C. is in the form of a medal. The medal depicts a stylistic dogwood, the floral emblem of B.C., and features a crowned shield of arms. It is worn with a green, gold, white and blue ribbon.