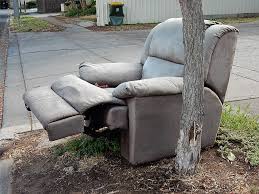 Driving in to work this afternoon driving up KGB there’s a chair – Looks like it may have been a recliner of sorts – just dumped on the side of the road.

Clearly someone didn’t know that there was a Pop-Up Junk event in Newton this weekend.

Cars lined up around the block to drop off things that you can’t leave curb side. Anointing that would have cost you money to dump at the the dump basically. Organizers say the event which started in 2016 used to see just over 1,000 vehicles pull up.

Now, they’re being almost 2,000 vehicles when they do the pop up events. (Yesterday being one of four every year now) City of Surrey saying illegal dumping has dropped by almost 30% since they introduced the event. And it’s gone so well the city of Vancouver has been looking south of the fraser and they’re about to launch something very similar.

Perhaps this should happen every weekend?