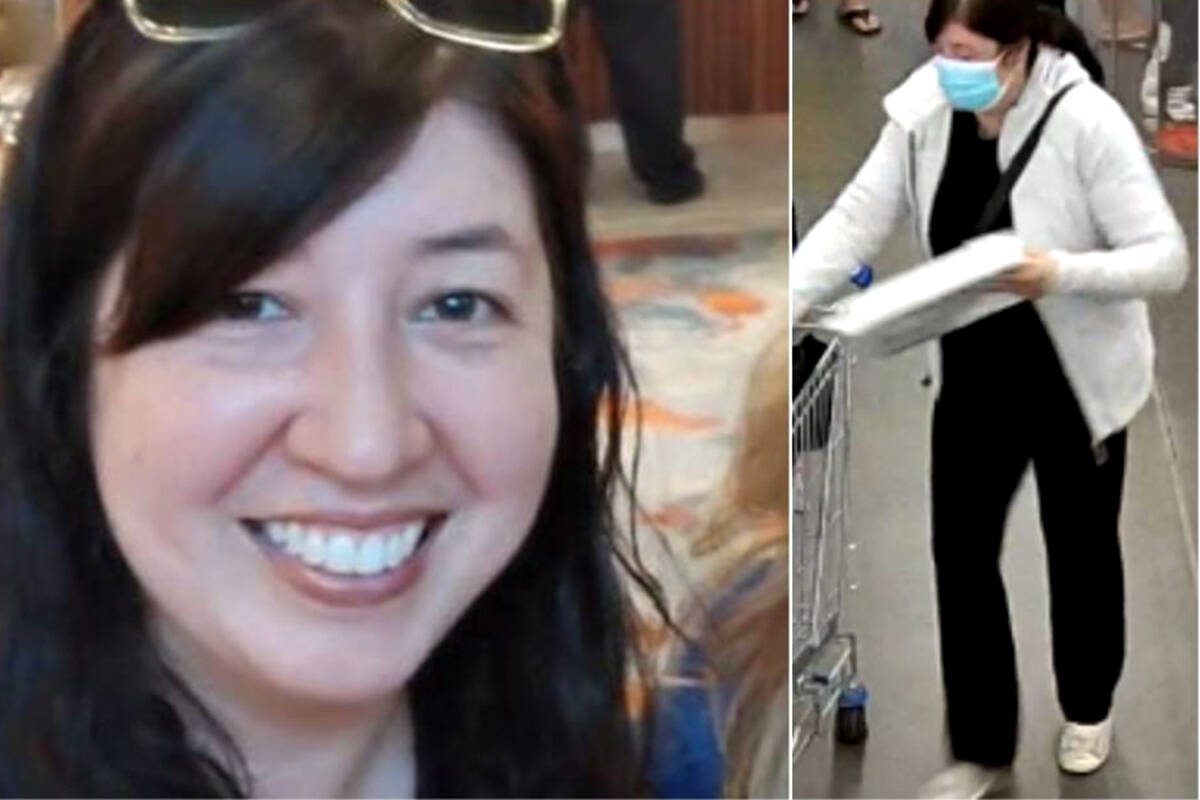 By JaclynSeptember 9, 2021News
No Comments

Naomi Onotera family just wants her back, after, the 40-year-old mother went missing 10 days ago. She works as a teacher-librarian at Surrey’s Katzie Elementary and was looking forward to heading back to school. Onotera was dedicated to her job, and her sister, Kirsten Kerr, says she knows the absence was deeply felt as kids headed back to class Tuesday. Onotera was last seen leaving her home near 200 Street and 50 Avenue in Langley on Aug 28. Police have appealed to people who live in the area, or who were driving through for any security or dashcam footage captured between 6 p.m. on Aug. 28 and 7 a.m. on Aug. 29. Volunteers in the community, organizing online through a Facebook group, have blanketed parts of the Lower Mainland with posters pleading for information to help locate Onotera. A candlelight vigil held over the weekend drew dozens of people to Langley’s Sendall Botanical Gardens. Others posted pictures online, lending their support from afar. A dedicated tip line has been set up for anyone who has information about Onotera’s disappearance, the number is 604-532-3398.

British Columbia’s COVID-19 vaccine passport system is being praised by groups representing doctors and the restaurant industry as unvaccinated residents continue to drive up infections across the province. Doctor Matthew Chow, president of Doctors of B-C, says the passport system highlights how important vaccinations are in reducing infections. Ian Tostenson, the president of the B-C Restaurant and Foodservices Association, says the system will allow dining places to stay open. The province released details of its vaccination card system Tuesday, with residents required to display the card to access non-essential businesses starting September 13th.

Demonstrators gathered outside Vancouver’s city hall on yesterday to protest the vaccine passport system. A nearby intersection was blocked for about an hour before the group marched downtown across the Cambie Street bridge, flanked by police. Anita Huberman, C-E-O of the Surrey Board of Trade, says protesters rallied outside the group’s building for hours on Tuesday to oppose its support of the vaccine passport so businesses can continue operating. Huberman says she’s also concerned that some people may say they’re unvaccinated but still insist they have a right to enter businesses, where the safety of employees could be threatened.
B-C health officials are reporting 814 COVID-19 cases and no new deaths. They say in a news release 272 of the new cases are in the Interior Health region, which brought back restrictions on indoor and outdoor gatherings following a spike in infections last month. The officials say about 78 per cent of those eligible in B-C have received both shots of the COVID-19 vaccine. B-C residents can now get their digital or paper proof-of-vaccination online in order to go out to restaurants or attend gyms and ticketed events starting next week.
A medical group says B-C’s COVID-19 vaccine card system is a good first step toward driving up vaccination rates. Doctor Matthew Chow of Doctors of B-C says his group would also like to see mandated vaccines for all health-care workers, similar to what is being done with long-term care staff. He says getting vaccinated is massively important in driving COVID-19 case numbers down and reducing infections. British Columbia released details of its vaccination card system Tuesday, and residents will be required to display the card to access non-essential businesses starting September 13th

One coyote was captured and killed in Stanley Park overnight, the province reported Wednesday while providing more details about how the cull is being carried out. The Ministry of Forests reports a “modified foothold trap” was used to “minimize the risk of pain or damage to the animal.” Cameras have been installed to signal when any traps are activated, so that wildlife officers can “attend and humanely euthanize the animals rapidly,” according to an email from a spokesperson. The statement goes on to say that “relocation is not an option” because “coyotes are highly territorial and would be in direct conflict with whatever local population they were introduced to.” Since last year, 45 people have been attacked in the park, five of the attacks were on children. The province announced the cull last week, saying the trapping and killing of the coyotes is being carried out under the Wildlife Act. It’s expected to take two weeks and up to 35 coyotes could be killed.

BC Health Minister Adrian Dix says the province is reviewing all options when it comes to limiting protests outside of hospitals. He says the government is working to ensure health-care workers are kept safe. Demonstrations were held outside hospitals in various cities around the province on September 1st where some workers at health-care facilities were verbally abused as they came to and from work, and at least one staff member was physically assaulted. Yesterday, demonstrators once again gathered outside Vancouver’s city hall to protest the vaccine passport system, and a nearby intersection was blocked for about an hour before the group marched downtown, flanked by police.

Two off-duty R-C-M-P officers in separate parts of B-C are being credited with saving a total of three lives. Police say a member of the Mounties’ forensic identification section was canoeing with his 11-year-old son near Revelstoke on Monday when they came across a flipped canoe with two men screaming for help. A statement from Revelstoke R-C-M-P says the two men believe they would not have made it to shore without the help of the officer and his son. And on northern Vancouver Island, off-duty Alert Bay Constable Denise Laforest used her recently refreshed first aid skills to successfully give C-P-R to a choking, unconscious baby at the side of a remote road after spotting the distraught parents as she passed in her own vehicle on August 30th.

BC health officials announced 774 new test-positive COVID-19 cases on Thursday, bringing the total number of recorded cases in the province to 172,338. In a written statement, Provincial Health Officer Dr. Bonnie Henry and Health Minister Adrian Dix said that there are 5,594 active cases of COVID-19 in the province. Of the active cases, 262 individuals are currently hospitalized, 130 of whom are in intensive care. The remaining people are recovering at home in self-isolation.

There have been five new COVID-19-related deaths in Interior Health, for a total of 1,847 deaths in British Columbia. Between September 1 and 7, people not vaccinated accounted for 78.6% of cases, and between August 25 and September 7, they accounted for 86.3% of hospitalizations.

The Canadian Institute for Health Information estimates costs to treat a COVID-19 patient in intensive care can reach 50-thousand dollars — compared with just under nine-thousand dollars for a heart attack patient and eight thousand for someone with pneumonia. A report from the institute says that’s because COVID patients are usually in hospital for so much longer. The report estimates COVID-19 cost Canada’s health-care system a billion dollars between January 2020 and March 2021 — and that doesn’t count physician’s costs or any costs related to health care in Quebec. (The Canadian Press)

The annual Union of B-C Municipalities convention begins next week and the organization says the province must work with it to find solutions to help cash-strapped local governments. A report from the U-B-C-M’s committee examining local government finance says provincial and local governments must co-ordinate efforts on affordable housing, community safety and climate change. U-B-C-M president and District of Vanderhoof Councillor Brian Frenkel says the study makes several recommendations, including a call for a fairer, more sustainable and adaptable property tax system to help local economies shift and emerge from the pandemic. Convention delegates representing every city, town, village and regional district in B-C are slated to vote September 15th on the committee’s recommendations. (The Canadian Press)

Nearly 100 firefighters from Mexico begin heading home this weekend after battling wildfires in this province since late July. The team and several support staff responded to B-C’s call for help as hundreds of wildfires flared in July — including the nearly 200-square kilometre Nk’Mip blaze that broke out July 19th. The wildfire service says crews from Mexico worked on that fire and several others in the Okanagan area and their help was invaluable. More than 200 wildfires are still burning in B-C, but no new ones have been sparked in the last two days and the number of homes under evacuation has fallen to 243 — just a fraction of the roughly 66-hundred homes that were evacuated at this time last month.