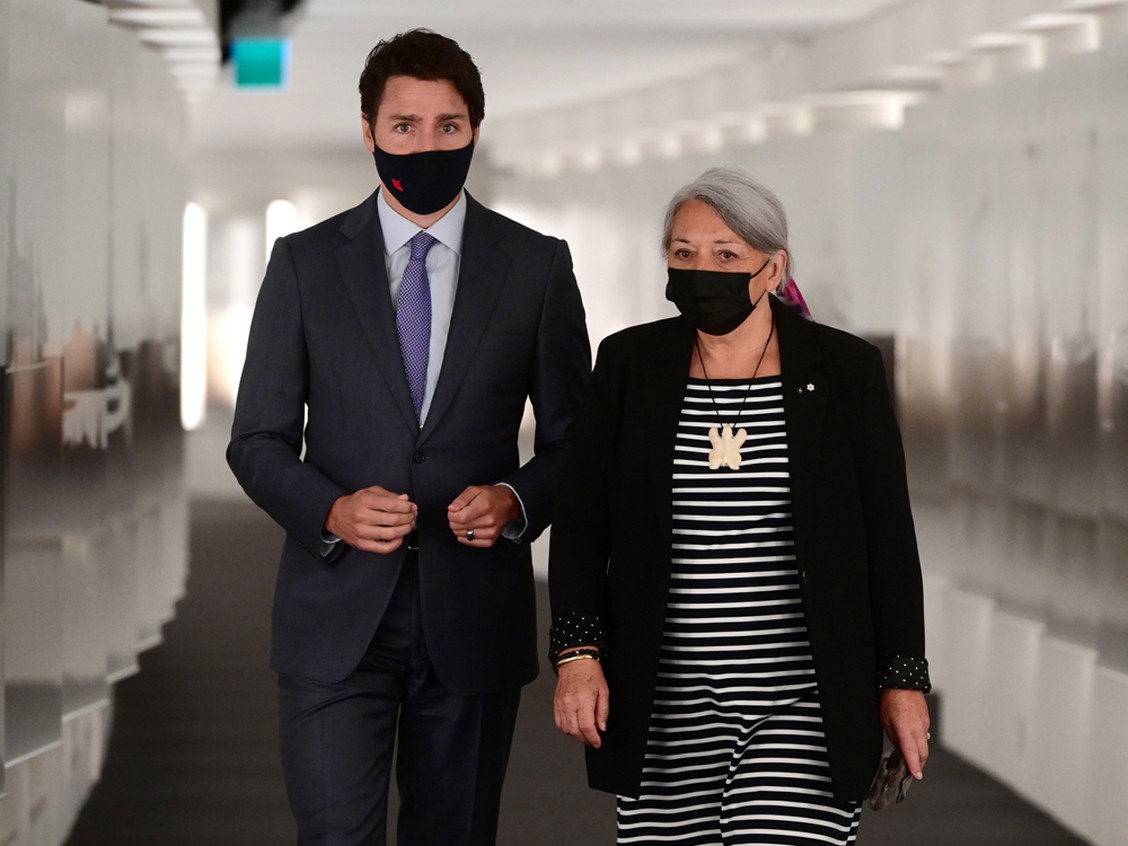 By JaclynOctober 1, 2021News
No Comments

Murray Rankin, B-C’s minister of Indigenous relations and reconciliation, says the province is providing access to records to First Nation groups investigating children who disappeared from residential schools. He says the government aims to be as transparent as possible in providing assistance to First Nations surrounding the schools. His comment follows a call from the Tk’emlups te Secwepemc First Nation to disclose all relevant records from the church and government to help identify missing Indigenous children at former school sites, including those in unmarked graves. Rankin says B-C has worked with First Nation leaders to develop a draft action plan to implement the United Nations Declaration on the Rights of Indigenous Peoples in the province.

More school districts are overriding provincial health officer Dr. Bonnie Henry and bringing in mask mandates for children from Kindergarten to Grade 3. Burnaby is the third district to announce it will be extending its mask policy for the younger grades, behind Surrey and Vancouver. The Burnaby district says in a letter sent out to parents last night that it made the unanimous decision after meeting with Dr. Ariella Zbar, the medical health officer of Fraser Health. The letter says Zbar’s assurance that masks are an effective layer of protection for all students when used with other health measures informed the board’s decision to change their policy.

Police on Vancouver Island say three B-C Ferries’ passengers were arrested last week after refusing to wear masks and becoming aggressive with other passengers. North Saanich R-C-M-P say the men from the Lower Mainland were reported to have threatened to fight other passengers when they were confronted over their refusal to comply with COVID-19 rules. Corporal Andres Sanchez says the men were arrested when the ferry arrived at Swartz Bay last Friday and have been released on conditions including a ban on visiting any B-C Ferries Properties Sanchez they will be charged with mischief and police are still investigating whether other charges such as uttering threats or assault might be warranted.

Hundreds turned out to Holland Park in Surrey Thursday (Sept. 30) for a Skookum Surrey event commemorating the country’s inaugural National Day for Truth and Reconciliation. Michael Kelly-Gabriel, of the Kwantlen First Nation, noted how the crowd kept “growing and growing.” “I just want to acknowledge all the people that have been here since the beginning and come out whenever these events are on and the new ones that are here today that have an open mind and open heart,” he said. Kelly-Gabriel said if people do even one thing today, it’s to educate yourself and others. He added people think residential schools and the impact of colonization on Indigenous communities is something of the past. Megan Rosso, community communications coordinator, said Thursday was actually an “exciting” because in previous years Sept. 30, which is also Orange Shirt Day, “has been just our own gathering.” She said she hopes those in attendance ”can take away a little bit more education and empathy and compassion for Indigenous issues.” But she added it’s not just about residential schools, “it’s about all of the colonial impacts that Indigenous people have suffered since colonization.”

Prime Minister Justin Trudeau is facing some harsh criticism after he was found to be spending time with family in Tofino rather than marking the first National Day for Truth and Reconciliation in Kamloops. Despite his schedule saying he’s in private meetings, its been confirmed through the Prime Minister’s Office he will be on Vancouver Island for a few days. Trudeau had received invitations to mark the day with residential school survivors and their families in Kamloops, where the remains of 215 children were discovered earlier this year. However, despite outcry over Trudeau’s whereabouts, his office says his west coast trip came “following his participation in [Wednesday] night’s ceremony.” A number of Twitter users posted about their frustration and anger. One person wrote, “Honestly, what are you thinking Justin Trudeau (sic)? I have proudly voted Liberal in every election, this is so disappointing.” Others said the trip was hypocritical while another user simply said, “Un. Believable.”

BC health officials announced 714 new test-positive COVID-19 cases on Friday, bringing the total number of recorded cases in the province to 187,694. In a written statement, Provincial Health Officer Dr. Bonnie Henry and Health Minister Adrian Dix said that there are 6,317 active cases of COVID-19 in the province. Of the active cases, 328 individuals are currently hospitalized, 138 of whom are in intensive care. The remaining people are recovering at home in self-isolation.

There have been 11 new COVID-19-related deaths over the past 24 hours, for a total of 1,973 deaths in BC. This includes four deaths in Fraser Health, six in Interior Health, and one in Vancouver Coastal Health. From September 23 to 29, people not fully vaccinated accounted for 71.3% of cases. From September 15 to 29, they accounted for 80.8% of hospitalizations.

A new market opened in Vancouver today offering food that had been destined to be thrown out to patrons on a pay-what-you-can basis. The Food Stash Foundation says it hopes the payment model at the Rescued Food Market eliminates any stigma associated with not being able to afford the rising costs of food. Executive director Carla Pellegrini says the foundation rescues nearly 32-thousand kilograms of food every month and its aim is to divert that to people who need it. Donations are being accepted to help keep the market running.

For the second time in a week, B-C’s provincial health officer has announced a change in COVID-19 protocols in schools after rising pressure from parents and teachers. Dr. Bonnie Henry says a province-wide mask mandate has been expanded to include students in Kindergarten to Grade 3 and will remain in place until at least January. She says she has heard the concerns of parents and teachers as COVID-19 cases have increased rapidly over the last couple of weeks among kids, especially those between the ages of five and 11 who are too young to be vaccinated. Pressure from parents earlier prompted Henry to announce a resumption in notifications of COVID-19 exposures at schools.

TransLink has confirmed the death of one of its bus drivers after the 64-year-old was pinned between two buses in downtown Vancouver on Monday. Vancouver police and WorkSafe B-C are investigating and police say the driver was dealing with a mechanical issue outside his bus when he was pinned by the second vehicle. The union local says the victim was a long-standing member with many friendships and “will be sorely missed.” All buses and SeaBuses stopped yesterday at 3 p.m. for a moment of silence as TransLink staff paid tribute to him.

Canada’s chief medical health officer says the Delta variant is having an effect on the rate of vaccination needed to reach herd immunity from COVID-19. Dr. Theresa Tam says the target will vary depending on population density and other factors, but the objective everywhere should be the same. She says we must throw up a barrier to the most-transmissible variant. Last month, Tam said she would like to see all age groups at least 80 per cent fully vaccinated as soon as possible to fight the surge in COVID-19 cases.