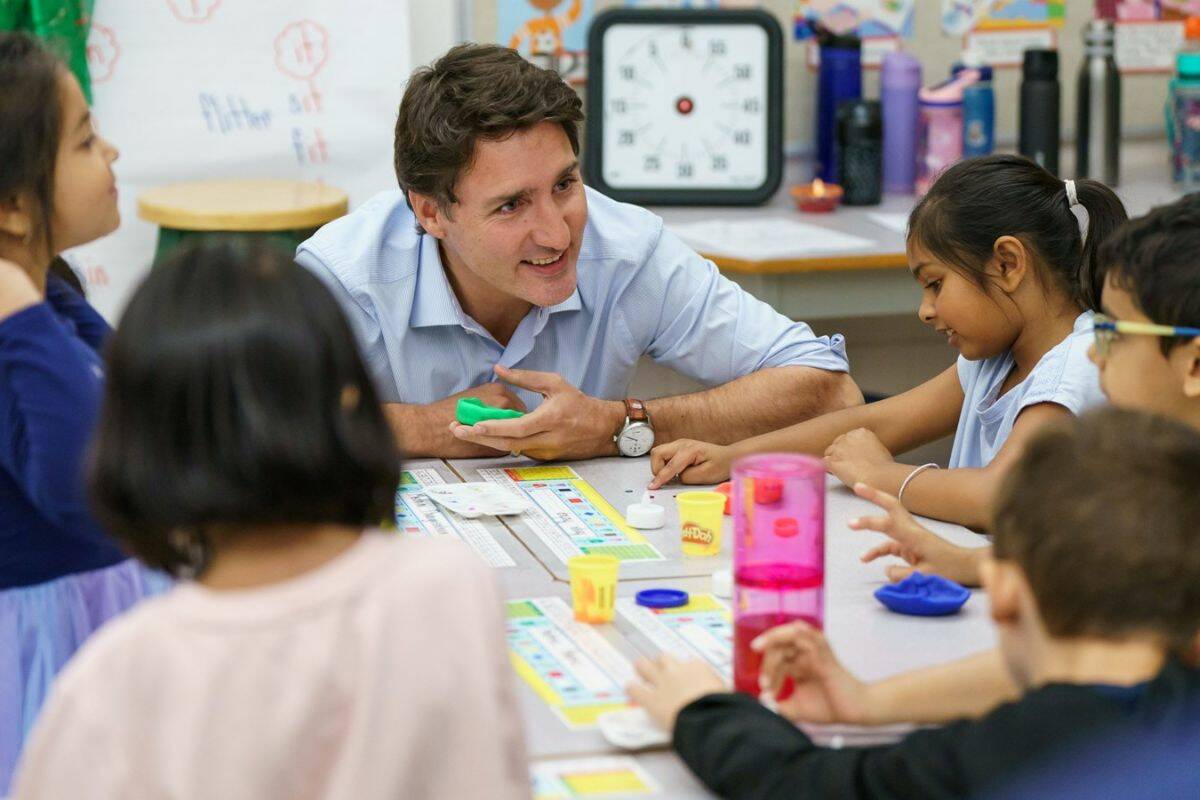 A convicted killer from Edmonton accused of damaging a Vancouver bank last month is back in custody after allegedly smashing nearly two dozen windows at the same financial institution. Curtis George McCallum — who was convicted of manslaughter in the 2006 killing of his aunt — was arrested Wednesday night. He has been charged with mischief to property over five-thousand dollars. Vancouver police say he remains in custody pending a court appearance later today.

Prime Minister Justin Trudeau went back to class in Surrey yesterday, where students are celebrating Diwali, the Hindu festival of light. Trudeau greeted the children at Cedar Hill Elementary and sat down to ask questions and help with crafts. He asked the students what the light symbolizes and they told him it means goodness. One student asked Trudeau how old he was, and he replied that he was 50, or “really old!”

Prime Minister Justin Trudeau says mental health supports need to be ramped up in order to prevent police services from acting as social workers. Trudeau told the House of Commons this week that police should not be the sole providers of outreach and mental health care in many situations. During a visit to Surrey, B-C this week, Trudeau expressed his condolences to the family of a fallen R-C-M-P officer who was stabbed to death while working as a mental health outreach worker with city employees in Burnaby.

While former Attorney General David Eby has nailed down the leadership of British Columbia’s governing New Democrats, his only rival says she won’t stop trying for change. Anjali Appadurai (AN’-jah-lee ah-PAD’-ur-eye) was removed from the race by the party executive after a report found a third party procured false memberships on her behalf. Appadurai says she will remain a member of the N-D-P and has no plans to stop her political activism to drive social change and revitalize the structure of the party.

David Eby, the N-D-P government’s former attorney general and minister responsible for housing, will be officially declared party leader today, paving the way for him to be sworn in as premier. Eby will replace John Horgan, who earlier this year announced he would be stepping down. Horgan says he is pleased that Eby will lead the province after his opponent, Anjali (AN’-jah-lee) Appadurai (ah-PAD’-ur-eye), was forced out of the leadership race. The party’s executive disqualified her for improper conduct signing up new members, making Eby the sole candidate.

A spokesman for the Vancouver Police Department says the stabbing death of R-C-M-P Constable Shaelyn Yang in Burnaby  highlights the fact that officers are increasingly ending up in potentially dangerous situations. People who lack support services while struggling with homelessness, mental illness and substance use are being forced to turn to Police as de facto social workers. Prime Minister Justin Trudeau told the House of Commons this week that mental health supports need to be stepped up, so police are not sole providers of outreach in many situations.

Court records show the man accused of stabbing R-C-M-P Constable Shaelyn Yang to death in Burnaby this week was wanted for assault before the fatal altercation. They show Jongwon (YONG’-wahn) Ham was charged with assaults in Vancouver and a warrant for his arrest was issued Monday — the day before Yang’s death. Ham’s assault charges relate to incidents on March 17th of this year and February 15th of 2021, when he was also charged with resisting a peace officer. He has since been charged with first-degree murder in Yang’s death.

Protesters lined the sidewalk outside the Taj Park Convention Centre in Surrey where Prime Minister Justin Trudeau spoke to a room of party members. The fundraiser had been cancelled twice this year — once because of protests and the second time because Queen Elizabeth died. In his speech, he thanked delegates for being patient. Trudeau is to hold a media availability in Vancouver this morning.