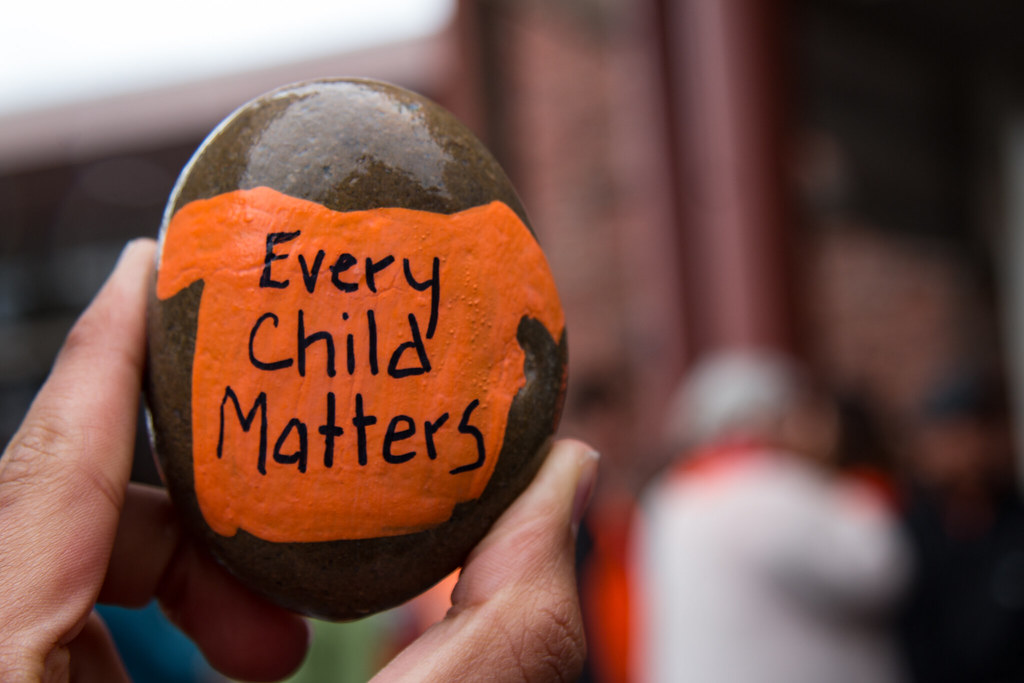 A First Nations teacher says educators across B-C will need to support students “triggered” by the discovery of over 200 children’s remains at the site of a former residential school in Kamloops. Rick Joe works with First Nations students in Chilliwack and says many are over-represented in the foster-care system and already struggle with generational trauma including families forced into residential schools. He says other students will need to be supported because they’re already learning about issues like Canada’s legacy of residential schools and missing and murdered Indigenous women and girls as part of the provincewide school curriculum. The B-C Teachers Federation has endorsed Joe’s suggestion that teachers wear orange all week and that flags at schools be lowered to half mast, but there are calls to do more to honour the 215 children whose remains were found at a former residential school in B-C. There are also calls for governments to use ground-penetrating radar to find similar grave sites at other schools across the country. First Nations teacher Rick Joe says the discovery of the remains is a triggering event for students who regularly learn about the history of wrongs against Indigenous people. In Vancouver, 215 pairs of kids’ shoes now line the steps of the Vancouver Art Gallery after being placed there Friday by First Nations advocates from the Downtown Eastside.

Two people are in hospital after a boat explosion on Pitt Lake, and one of them is in critical condition. Emergency Health Services says crews were called to the Grand Narrows boat launch yesterday afternoon after reports of an explosion. One person was airlifted to hospital while the other was transported by ambulance. There were a total of 5 people on board Video from the scene shows a small motorboat engulfed in flames and thick black smoke pouring out.  Deputy Fire Chief Brad Perrie says crews were able to quickly get the fire under control, however due to the intial size of the fire, 2 people were injured.

B-C health officials say COVID-19 is still spreading as the province begins to reopen through a planned series of four stages. They say it’s important to get vaccinated while still maintaining social distance and using masks to stay safe during this period of transition. Officials say there’s been a COVID-19 outbreak at a long-term facility, Brookside Lodge in Surrey, where one resident and staff member tested positive. The province reported 317 new COVID cases on Friday and two more deaths.

Weekend clinics have boosted Canada to the point where 5.3 per cent of the population has been fully vaccinated. This week will see the delivery of 2.9-million doses of COVID-19 vaccines — with the bulk of the shipment coming from Pfizer-BioNTech. Over the weekend, Health Canada extended the expiry date on about 45-thousand doses of the Oxford-AstraZeneca vaccine that were due to expire today, by one month. Ontario pharmacies had been racing to administer the doses as second shot before the original best-before date

A South Surrey man who developed a blood clot after receiving the AstraZeneca COVID-19 vaccine is encouraging people to watch for symptoms for a little longer than what’s recommended by health officials. Approximately one in 60,000 people can develop a blood clot after receiving the AstraZeneca vaccine. The BC Centre for Disease Control said people who receive the vaccine should watch for symptoms between four to 20 days after being vaccinated. The symptoms include headache, seizure, difficulty moving, blurry vision, difficulty speaking, shortness of breath, chest pain, severe abdominal pain, swelling on arm or leg, abnormal bruising or reddish or purple spots under the skin. Hal Fraser Bringeland received his shot April 5. It wasn’t until April 30 that he first realized he was having trouble catching his breath while playing squash. Since it was well after the symptom window, Bringeland said he wrote it off as stress at work, or age. Bringeland credits his wife for encouraging him to call 811, he is now on blood thinners and expected to make a full recover but still gets a little friendly razzing from his buddies saying: We used to think you were that one in a million kind of guy, so we’re sadly disappointed to learn you’re one in 60,000.

Prime Minister Justin Trudeau says he plans to speak with cabinet ministers who oversee Indigenous policy and funding on next steps, after the discovery of remains of hundreds of children at a former residential school in B-C. Indigenous leaders have expressed concern that more children may be buried at former school sites across the country. The Federation of Sovereign Indigenous Nations and the Saskatchewan government say they want Ottawa to help research undocumented deaths and burials. The federation has compiled a list of initial sites where it hopes to complete ground penetrating radar searches.

BC’s minimum wage breaks the 15-dollar per hour mark tomorrow when the provincial government boosts it to $15.20 per hour and ensures liquor servers also receive the same rate, ending the even lower minimum wage for that class of worker. A statement from the Ministry of Labour says tomorrow’s 60-cent increase means B-C now has the highest minimum wage of any province and, starting next year, further increases will be tied to inflation. The liquor server’s minimum wage jumps $1.25 per hour from its previous hourly setting of $13.95. The B-C Federation of Labour says the latest increase will help address income inequality and offset challenges created by ever-rising housing, food and transit costs.

Provincial health officer Dr. Bonnie Henry says no words can do justice to the children whose bodies were found in unmarked graves at a residential school in Kamloops. She started her COVID-19 briefing today by expressing her sorrow for the 215 Indigenous children and the countless others who died alone, scared and far from their families in residential schools. Henry pledged her commitment to changing systems and laws that continue to perpetuate racism that hurts Indigenous peoples in countless ways. She added Canadians can’t get stuck in the shame and grief of what was done to First Nations children and families, instead they must commit to taking meaningful action to uphold the rights of Indigenous people.

Surrey Mounties are investigating after shots were fired at a house in Newton at about 1 a.m. Monday. This was in the 13500-block of 64A Avenue. Nobody was injured, police say. Corporal Vanessa Munn said police initially responded to a report of “a mischief to a window.” She said the motive remains unknown but added that “based on the initial investigation, there is nothing to suggest that there is any link to the Lower Mainland gang conflict.” Police ask anyone with information to call the Surrey RCMP at 604-599-0502 or Crime Stoppers at 1-800-222-TIPS.

BC is reporting 708 new cases of COVID-19 over the past three days and 11 additional deaths. That brings total deaths in the province since the pandemic began one-thousand-703. The province has two-thousand-953 cases that remain active with 249 people in hospital, including 78 in intensive care. The rolling seven-day average of daily new cases is now 277 — the lowest level since the end of October.

Finance Minister Chrystia Freeland’s office says she will travel to a meeting this week of G-7 finance ministers in the U-K. Freeland’s office says that the two-day meeting in London starting June 4th is an “in-person-only” event. A release says Freeland and the delegation with her will follow strict public health protocols, and will quarantine as required upon their return to Canada.

Vancouver Coastal Health is confirming a dozen incidents in which youth were given the wrong COVID-19 vaccine. The health authority says the errors happened Friday and Saturday during the first full week that kids aged 12 to 17 could get their first dose. It says in a statement that 12 youth received doses of Moderna rather than the Pfizer-BioNTech vaccine, which is the only COVID-19 vaccine approved for use in their age group. The health authority is apologizing and says it’s updating its immunization processes.