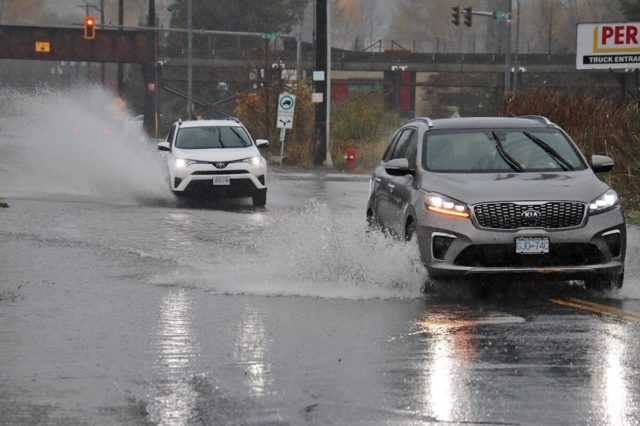 By LeslieNovember 29, 2021General
No Comments

Residents of another handful of properties in Abbotsford were ordered to evacuate late last night due to the ongoing flood threat.  Crews in the city, including members of the Canadian military, worked through the night to pump water into tiger dams to try to hold back floodwaters from the Sumas River.  And the District of Hope declared a local state of emergency yesterday while new evacuation orders were issued in an area west of Merritt.  Meanwhile, the third atmospheric river is forecast to slam into the province on Tuesday and and officials have warned it could be the worst one yet.

B-C’s public safety minister is advising against non-essential travel in the coming days as the province braces for the third in a trio of storms.  Mike Farnworth says the government doesn’t want any unnecessary road closures that would further strain resources.  He advises those who must be on the road to drive carefully and never attempt to drive through flood waters because the depth isn’t always obvious.  He also suggests people prepare for emergencies by carrying food, water, warm clothes, blankets and well stocked emergency kits in their vehicles.

The threat of flooding has closed another major section of Highway 1, this time between Abbotsford and Chilliwack.  The closure came as floodwaters poured across the Canada-U-S border and after the region received more than 100 millimetres of rain over the weekend.  The Transportation Ministry says Highway 1 also remains closed between just east of Highway 9 and Hope, through the Popkum-Bridal Falls area.  Highway 7 remains open between Mission and Hope, however the ministry reminds travelers that restrictions remain in place on that stretch of highway.

The Transportation Ministry says it has reduced speeds on several highways to lessen the risk of damage due to flooding.  The Ministry says in a tweet that some highways are given 60 kilometre-per-hour speed limits due to ground saturation.  Because of storms, it says the ground under the road could be soft and travelling at higher speeds is more likely to cause damage.  Several highways were destroyed by storms two weeks ago and others were closed over the weekend as a precaution or due to localized flooding.

Canada is investigating its first two cases of a new COVID-19 variant of concern.  Both cases of the Omicron variant were detected in Ottawa on the weekend and both involve patients who had recently been in Nigeria.  The federal government on Friday barred visitors from seven southern African countries in a bid to keep the variant out, but Nigeria was not among them.  The Ontario government has called on Ottawa to implement point-of-arrival COVID-19 testing for everyone entering Canada regardless of where they came from.

Today is the day! Younger children in BC can start getting their COVID vaccine.  Dr. Bonnie Henry has said that about 350-thousand children aged five- to 11 are eligible to receive the kid-sized dose of Pfizer.  She notes the same vaccine has been administered to more than three-million children in the U-S and there have been no “safety signals” as a result.

The word “vaccine” has been declared the 2021 word of the year by Merriam-Webster.  The selection follows last year’s choice by the dictionary company of “pandemic” as tops in lookups on its online site they say the word “vaccine” really carries two huge stories –one is the science story, and the other involves the debates regarding policy, politics and political affiliation.

Premier John Horgan is wishing a Happy Hanukkah to all those who celebrate the Jewish holiday. Today is the second day of the holiday, also known as the Festival of Lights, which spans eight days and nights. The premier says in a statement that Hanukkah serves as a powerful reminder that light will triumph over darkness, good over evil and that freedom and courage will always prevail. He says British Columbians have been through a lot together recently but he believes the brightest days lie ahead.

Health Minister Adrian Dix says nearly a third of the 350-thousand children aged five to 11 in the province have been registered to receive COVID-19 vaccinations. Dix says parents who registered their children for the pediatric vaccine were to start receiving invitations to book an appointment starting today and he is urging them to be patient. He says there may be some frustrations on Day 1 as other people are booking booster shots or making appointments for their first or second vaccinations. Health officials have said the full children’s immunization effort including second doses is expected to conclude by the end of January.

It’s going to be more expensive to get a turkey for Christmas dinner, and the Turkey Farmers of Ontario is warning some stores may sell out of birds. Turkey stocks are at 30-year lows, and the B-C flooding disaster is making transportation of birds difficult. Last summer’s extreme drought on the Prairies also increased the cost of wheat and feed grains, boosting turkey prices by about 25 per cent.

British Columbia health officials announced on Monday that there have been 970 new test-positive COVID-19 cases since Friday, bringing the total number of recorded cases in the province to 218,068. There were 389 cases discovered between Friday and Saturday, 309 between Saturday and Sunday, and 272 between Sunday and Monday. In a written statement, Provincial Health Officer Dr. Bonnie Henry and Health Minister Adrian Dix said that there are 2,882 active cases of COVID-19 in the province. Of the active cases, 303 individuals are currently hospitalized and 115 are in intensive care. The remaining people are recovering at home in self-isolation.

There have been 11 new COVID-19-related deaths, for a total of 2,333 deaths in British Columbia. Of the new deaths, four were in Fraser Health, four were in Interior Health and three were in Northern Health. To date, 91.1% of all eligible people 12 and older in BC have received their first dose of the COVID-19 vaccine; 87.8% have received their second dose. From November 19 to 25, people not fully vaccinated accounted for 59% of cases, and from November 12 to November 25, they accounted for 67.2% of hospitalizations.

Past two weeks, cases hospitalized per 100,000 population after adjusting for age (November 12 to 25)