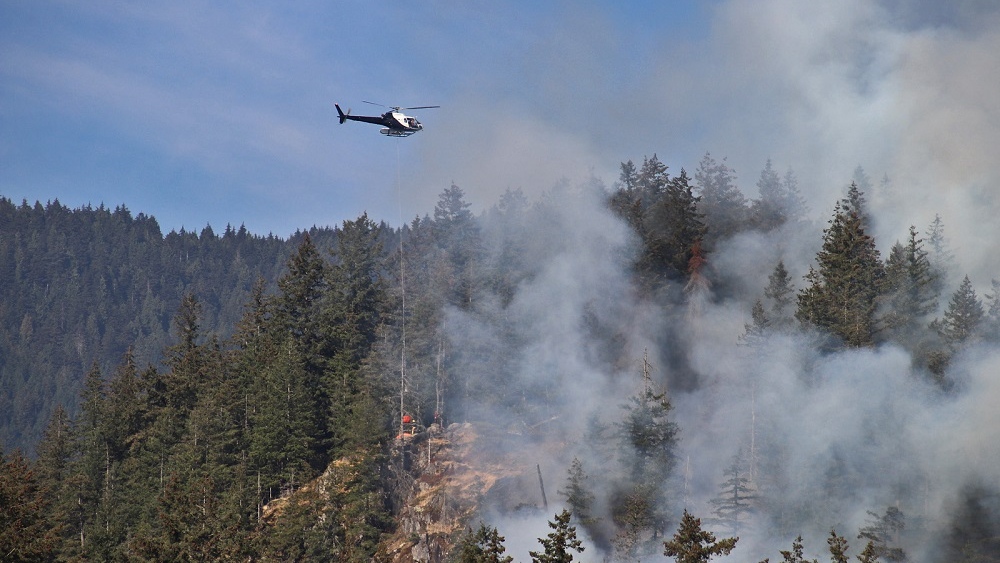 By Jeremy TubbsOctober 3, 2022News
No Comments

A regional park in the Lower Mainland remains closed as crews battle a wildfire sparked over the weekend in persistently hot and dry conditions. The Metro Vancouver Regional District posted an update on social media, saying firefighting crews were working in “extremely steep and challenging terrain” to suppress the fire in Coquitlam’s Minnekhada Regional Park. The BC Wildfire Service lists the 11-hectare blaze as burning out-of-control. It says human activity is the suspected cause of the fire.

Data from Environment Canada shows a series of high temperature records fell across B-C over the weekend in communities from Vancouver Island to the Interior. Nine communities saw their hottest October 1st on record — including 24.8 degrees in the Clearwater area, where the previous record was set 99 years ago in 1923. The hot weather has been coupled with dry conditions,
exacerbating low-level to severe drought throughout the province. BC’s drought map shows all of Vancouver Island, the Lower Mainland and the Sunshine Coast along with the Fort Nelson Basin are experiencing the second-most-severe level of drought on the province’s scale.

RCMP are condemning a group of teenagers who they say drove around Campbell River in pickup trucks trying to incite fights with homeless people. The Mounties say most of the teens were highly intoxicated — although none were of legal drinking age — and several of them were arrested. Constable Maury Tyre described the teens as “a group of privileged youth taking on some of our town’s least privileged.” Tyre says similar incidents have happened in recent weeks, with people in pickup trucks chasing and throwing rocks at people who are homeless.

Interior Health has issued a warning against the use of the drug Ivermectin to prevent or treat COVID-19, after flyers were found circulating in Kelowna. The health authority says leaflets have been advertising the sale of Ivermectin, which is authorized by Health Canada for human use as a prescription antiparastic drug for parasitic worm infections, but not meant to prevent or treat COVID-19. Interior Health says using Ivermectin in its human or veterinary versions for purposes other than what it’s authorized for may cause serious health problems. Health Canada has previously issued a reminder to Canadians not to use Ivermectin for the disease, following a spike in reports to poison centres.

A man has been sentenced to one year in jail for voyeurism and child pornography — charges that stemmed in part from filming employees and their children using hidden cameras placed in workplace washrooms between 2014 and 2016. The man — whose name has not been released as part of a publication ban to protect the identities of his victims — was sentenced in Kamloops provincial court last week after pleading guilty last May. The decision says the man’s crimes in BC did not come to light until 2016, when he was arrested and later convicted on similar charges in Kingston, Ontario. The judge considered the man’s early guilty plea, the remorse he expressed, and his efforts at rehabilitation while in prison in Ontario as mitigating factors.