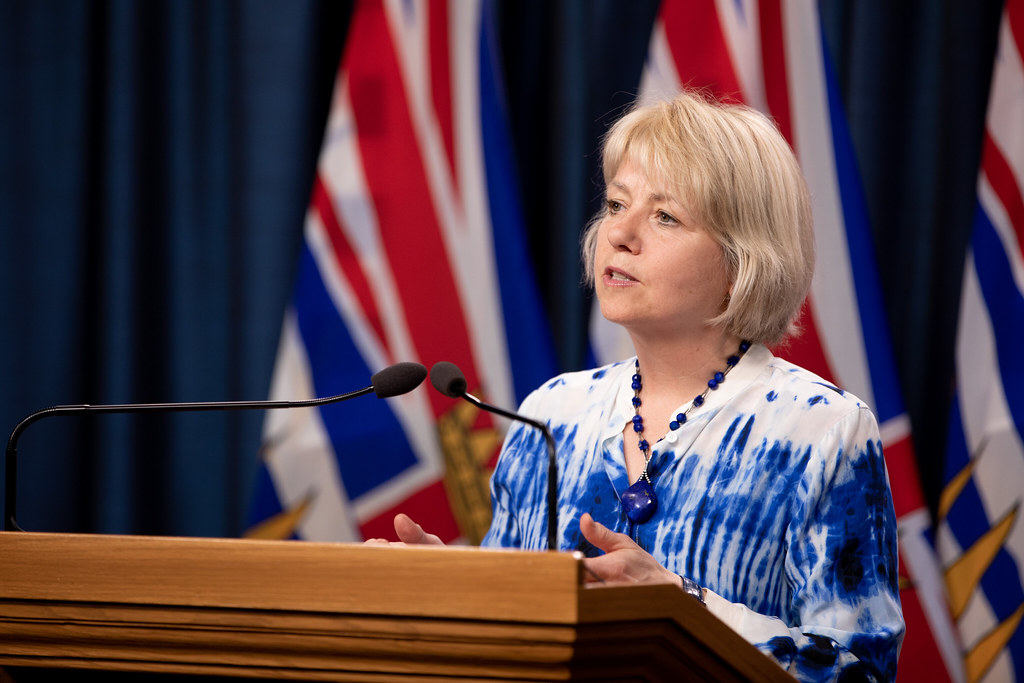 By JaclynOctober 26, 2020News
No Comments

Provincial health officer Doctor Bonnie Henry has announced a new limit on gatherings in private homes to immediate family members and no more than an additional safe six guests. Henry made the announcement as she reported 817 new cases of COVID-19 since Friday. the highest number recorded over a three-day period. She also reported three more deaths, all residents of long-term care facilities in Vancouver Coastal health. Henry says two schools have also closed due to COVID outbreaks — one in Fraser Health and one in Kelowna in a previously announced outbreak

Several more schools in Surrey reported COVID-19 exposures over the weekend, the school district announced on Twitter. An exposure occurs when someone comes in contact with a school and later tests positive for coronavirus. Meaning anyone they may have interacted with leading up to their positive diagnosis could have been exposed to the virus.
Surrey Schools announced new exposures at Sullivan Heights Secondary and French-language Salish Secondary on Sunday. An infected individual was at Sullivan Heights on October 13, 14, 15, and 19, and another infected individual was at Salish Secondary on October 16. On Saturday, Surrey Schools announced coronavirus exposure at Fraser Wood Elementary, Kwantlen Park Secondary, Johnston Heights Secondary, Serpentine Heights Elementary, and Tamanawis Secondary.
Fraser Wood’s coronavirus exposure was on October 13, 14, and 15; Kwantlen Park’s was on October 13, 14, and 21; Johnston Heights’ was on October 19, Serpentine Heights’ was on October 19 and 20; and Tam-an-awis’ was on October 15 and 16. Contact tracers are working to identify close contacts of the cases and will get in touch with individuals directly. Anyone who does not receive a personalized phone call directly from public health can still go to school as normal.

Fraser Health has declared the COVID-19 outbreak over at Delta Hospital. With the implementation of comprehensive strategies to prevent and respond to COVID-19 in acute sites, there are no longer any COVID-19 cases at this location. Fraser Health declared an outbreak at Delta Hospital on Sept. 16 after evidence of transmission in a Medicine unit.
Upon declaring the outbreak, Fraser Health immediately implemented precautions, including enhanced cleaning, as well as contact tracing to protect the health of all staff, medical staff, and patients. Delta Hospital will be open to new admissions as of Oct. 28.

B-C Liberal Leader Andrew Wilkinson has announced his resignation after the party’s worst election loss in decades. Wilkinson says he’ll step down as soon as a replacement is selected. He took no questions at a news conference today following the party’s loss of about a dozen seats in Saturday’s election. The former provincial cabinet minster took over as party leader in 2018 after Christy Clark stepped down when the Liberals lost power after the 2017 election.

Elections B-C says fewer people voted on election day on Saturday than those who voted in advance polls. The agency says just 52.4 per cent of eligible voters cast ballots — the lowest participation rate in statistics dating back to 1928. The elections agency says the total includes about 525 thousand people who returned mail-in ballots in time to be counted. It says it won’t be counting those ballots for several weeks but that’s not expected to change the election result that saw the N-D-P win a majority government.

Some icy and wicked weather gripped much of central and northern B-C this morning but Environment Canada says conditions are already easing.
Winter storm warnings were issued for the Cariboo and Chilcotin north to the Peace River region, and for most of the area along the boundary with Yukon, while a freezing rain warning was posted for the inland north coast — although all the warnings have been lifted, except those for the Yellowhead and McGregor regions. The weather office forecast hazardous winter conditions across much of central B-C, with snow up to 25 centimetres in Prince George and east to the Alberta boundary. Even regions not covered by warnings reported bitter conditions this morning, with numerous crashes on slick highways through the north Okanagan.

A Surrey family narrowly escaped a massive fire that broke out in their home in Newton in the early hours of Sunday morning. Firefighters were called to the scene in the 7000 block of 126A Street around midnight. Video from the scene shows a large hole in the tile roof where it collapsed. Firefighters were inside when that happened, but managed to get out safely. there were eight people inside the home when the fire broke out. Residents were leaving the house as fire crews arrived. Six of them were taken to hospital as a precaution, but none sustained any serious injuries, he added. A total of 11 trucks and 32 firefighters responded to the third-alarm blaze, Serbic said. The cause of the fire is still under investigation.