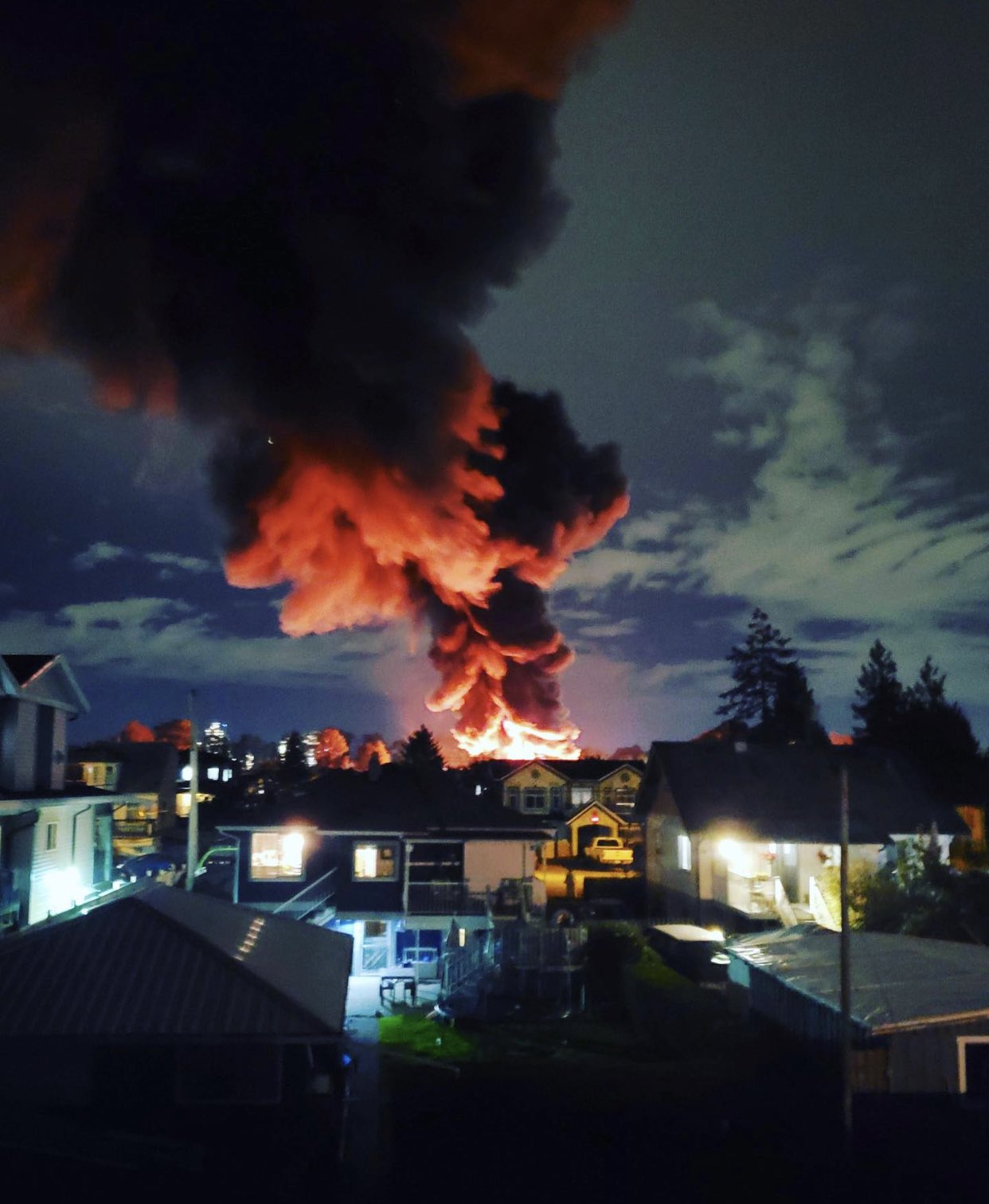 By LeslieOctober 13, 2020News
No Comments

Fire crews from New West, Delta and Richmond joined forces to battle a humongous four-alarm blaze in an industrial area of New West’s Queensborough neighborhood last night.  A massive plume of smoke and orange flames lit up the night sky and could be seen from around metro Vancouver crews were called in around 7:20 to the fire burning in a plastics recycling facility So far, there is no word on a cause, or any reports of injuries.  The public is asked to avoid the area, and residents are advised to close their windows and remain indoors.

The N-D-P say Liberal Leader Andrew Wilkinson should have done more in the wake of disparaging comments made by a Liberal candidate about an N-D-P candidate.  Liberal candidate Jane Thornthwaite made disparaging remarks about her N-D-P counterpart Bowinn Ma, during an online roast held to honour the retirement of another Liberal member.  N-D-P Leader John Horgan said Monday that party leaders need to stamp out sexist comments and behavior.  Thornthwaite says she has reached out to Ma to apologize for the comments

The N-D-P announced a renter’s rebate as the latest plank of their election platform.  NDP Leader John Horgan says his party’s plan also includes making a cap on rent increases permanent.  Under the rebate plan, households that earn up to $80,000 a year will be entitled to $400 a year.

The leaders of B-C’s three main political parties are getting ready to square off tonight in the campaign’s first debate.  The Green party released its election platform on livability and transit over the long weekend, while the Liberals and the N-D-P traded jabs over the progress of redeveloping the Richmond Hospital.  Political experts say the debate could be one of the few events where voters get a chance to truly assess the leaders.

Applications for the income support program replacing the Canada Emergency Response Benefit opened yesterday.  The Canada Recovery Benefit will provide $500 per week to those whose employment was affected by COVID-19 but who are not entitled to Employment Insurance.  A new application is required every two weeks, and people can claim the benefit up to 13 times.

An actor says he’s grateful for the work of a B-C professional ring-finder, after losing his wedding band on Friday night.  Jon Cryer, of Two and a Half Men fame says his ring slipped off his finger while walking to meet castmates in downtown Vancouver.  Cryer turned to The Ring Finders, a company specializing in finding lost rings and valuables.  Chris Turner, the company’s founder, found the ring in a matter of minutes, and says he’s astonished by Cryer’s good fortune