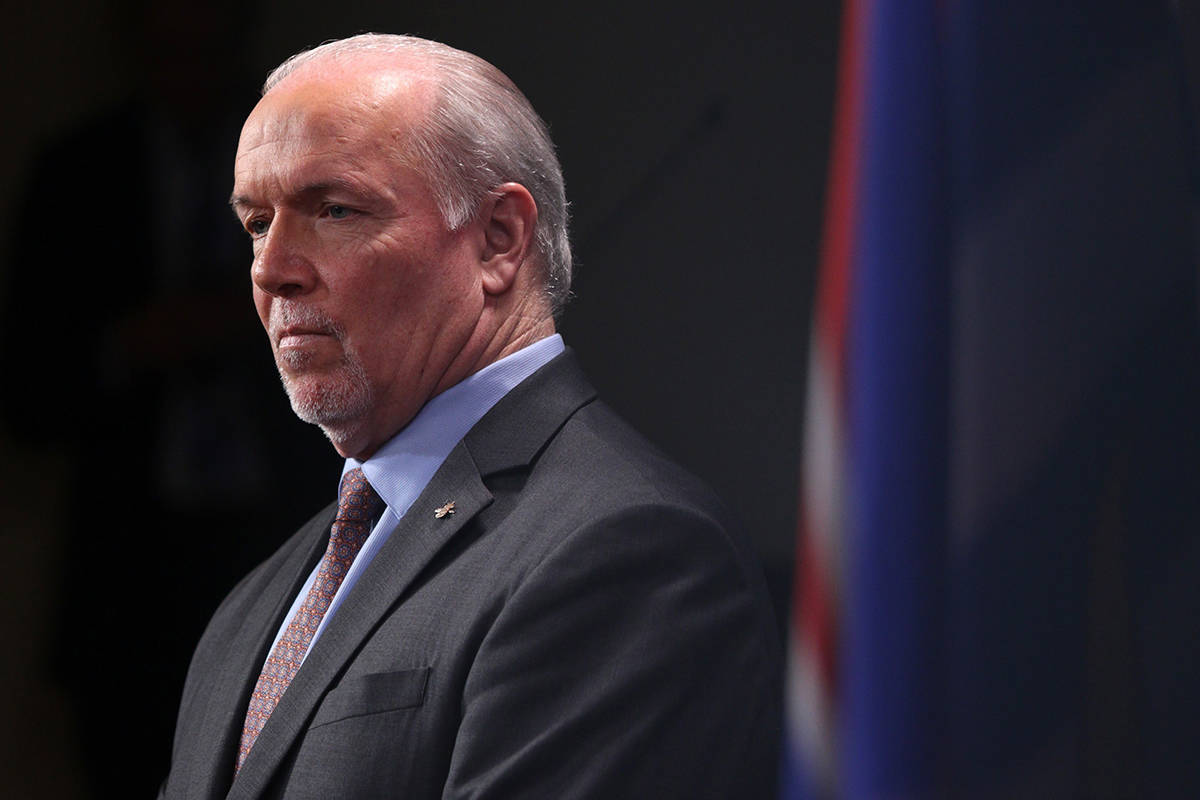 30 years olds in high transmission neighborhoods can now get a COVID vaccine. Fraser Health launched a few last-minute vaccine drop-in clinics for April 27. In a press release, Fraser Health said they opened three drop-in clinics, one in Cloverdale, one in Whalley, and one in Coquitlam. People 30 years of age and older who live in “high-transmission neighbourhoods in the Fraser Health region” can now get the AstraZeneca shot at the Cloverdale Rec. Centre and the Poirier Forum in Coquitlam. Both are open from 12:30 p.m– 7:00 p.m. Those high-transmission neighbourhoods are: East Newton, Fleetwood, North Delta, North Surrey, Panorama, Port Coquitlam, South Langley Township, West Abbotsford, West Newton, and Whalley. People who live in one of those neighbourhoods, but are 40 years of age and older can visit a drop in clinic today in Whalley from 12:30 p.m – 7:00 p.m.

It’s been less than a week since travel restrictions were announced for B.C. with promises of $575 fines for rule-breakers heading outside of their permitted health authorities for non-essential reasons. But according to RCMP, not a single ticket has been handed out by their officers, and there’s continued confusion of how these rules are being enforced. Last week the province said enforcement measures would become clear and B.C. Premier John Horgan is defaulting to Public Safety Minister Mike Farnworth, who will explain further details later this week. “We are working with the RCMP about where we can strategically put counterattack checkpoints to remind British Columbians and to educate them on the importance of staying local, enforcement tools will be known later in the week by minister Farnworth,” Horgan says Tuesday, adding implementing travel restrictions is a two-step process, and insists answers on enforcement are on the way within the next week.

Playland which is located in East Vancouver has delayed its opening until after the May long weekend over concerns it would attract COVID-19 rule breakers. Playland says it was set to open at Pacific National Exhibition on Saturday after developing a safety plan supported by Vancouver Coastal Health. But it says concerns were raised during a discussion with the office of B-C’s top doctor that opening could draw people from outside the health authority at a time that non-essential travel is restricted between three main regions. Provincial health officer Dr. Bonnie Henry said this week being outside is safer than indoor settings, but now is now the time for people to come together for recreational reasons

A man in Port Coquitlam said he waited more than four hours Tuesday to get the AstraZeneca vaccine at a Fraser Health drop-in clinic after it was announced 30 year olds and higher whoe live in hostpots can now get the vaccine, but noticed  he was surrounded by people who don’t live in the neighbourhood that’s considered a COVID-19 hot zone. While Health Minister Adrian Dix says the people running those clinics are supposed to be checking to make sure vaccines are only given to residents from specific postal codes, but apparently that was not the case saying no one at the Poirier Forum clinic in Coquitlam asked him –or anyone else– for proof of where they live. “I know people that can’t get off work to come and get a vaccine. And if they were to get here late, they wouldn’t get one because people ahead of them have already lined up,”  On Tuesday, Fraser Health set up two vaccine clinics for people over the age of 30 at the Cloverdale Recreation Centre in Surrey and at the Poirier Forum in Coquitlam. “If there’s only 2,000 shots for the day, and this is a one-day event for ages 30+, then, of course, people are gonna miss out,” Nikitiuk adds. People encouraged to get vaccinated were advised to check their postal code before showing up

B-C has confirmed 799 new cases of COVID-19 and no new deaths. Active infections ticked down to eight-thousand-and-89, while hospitalizations are back up to 500, including 164 people in I-C-Us. The latest case numbers came as the province extended its state of emergency again, allowing officials to continue responding to the pandemic using extraordinary powers under the Emergency Program Act. Premier John Horgan says details should be coming later this week on the enforcement of public health rules that prohibit residents from travelling between three defined regions.

A retail giant is reaching out to the little guy, offering to give B.C. restaurants a boost during the COVID-19 pandemic. Those with specialty items, such as made-from-scratch sauces or jams, are now eligible to sell their products at London Drugs retail locations. The Canadian company is accepting applications from small businesses that would benefit from their shelf-stable products and merchandise popping up on store shelves within the next week. London Drugs launched an initiative in April that has seen more than 100 businesses sell their products in stores and earn hundreds of thousands of dollars. The new restaurant-focused sales opportunity is an extension of that Local Central program.

The head of a national nurses union says even with the military helping in some provinces, it’s still not enough to help battle the third wave of COVID-19. The Canadian Federation of Nurses is demanding governments take bold steps to counter this latest wave adding there are not enough health care workers available now. “We’re seeing nurses, doctors, respiratory technicians, paramedics, the list goes on, that are just holding on by threads,” said President Linda Silas. “They’re burning out, they’re telling us they want to leave but they can’t leave because people are dying in their hands.” To flatten the curve and give ICUs some reprieve, Silas said governments need to take aggressive action, including ramping down non-urgent care, limiting international and inter-provincial travel, and stepping up immunization efforts, with an increased focus on fully vaccinating frontline nurses, health care workers and other essential workers. She added that not doing this could lead to more trouble at hospitals and with health care workers. On top of strict measures, she is also calling for better paid sick leave for all essential workers, regardless of income or status, adding that more than 85,000 health care workers have contracted the virus since the start of the pandemic. While she understands many Canadians are tired of restrictions and lockdowns, she said COVID-19 is still a major risk that can’t be ignored.

Canada’s first 300,000 doses of the Johnson & Johnson COVID-19 vaccine are arriving today, and apparently the government needs to “protect this new vaccine supply chain.” J&J has struggled with production problems and has been able to deliver very few doses, even in the United States. Canada purchased 10 million doses, and has the option to buy 28 million more. The doses are expected to be distributed to provinces next week. The National Advisory Committee on Immunization has not yet provided guidance on how the vaccine should be used alongside the other three in use already. This week’s delivery of just over one million doses from Pfizer-BioNTech is already in Canada. A delayed shipment of about 650,000 doses from Moderna is also en route to Canada now.

Firefighters had to act quickly to snuff flames that engulfed a tent at the Strathcona Park homeless encampment in east Vancouver early last evening. The fire broke out at about 6 p.m. and created a lot of smoke but was quickly put out and no one was hurt. Fire officials say the cause is under investigation. Residents of the encampment have been told it will close Friday as the city seeks safe, indoor shelter for residents and the park board restores the site for community use.

Surrey RCMP is urging members of the public to exercise caution after a recent increase in drug toxicity deaths in Surrey. Between April 21 and April 27, 2021, Surrey RCMP were called in response to six separate deaths believed to be caused by drug toxicity. At this time, it is unknown if the deaths are related to the use of illicit substances from the same source however, it is suspected that the deaths are linked to the use of fentanyl/heroin (opiates). Five of the six decedents were located in private residences and it is believed that they were using drugs alone. Sadly, there have been 70 fatal overdoses in our community this year, with 20 of those occurring in April, so far.

New rules requiring that B-C employers give workers paid time off to get COVID-19 vaccinations are now in effect. A statement from the Ministry of Labour says amendments to the Employment Standards Act are retroactive to April 19th. The amendments provide up to three-hours of paid vaccination leave for both full-time and part-time workers. Labour Minister Harry Bains says it’s in everyone’s interests to remove barriers to vaccinations because they keep workers safe and reduce risks to businesses.

A man who pleaded guilty to charges laid after police discovered what they described as a makeshift nightclub in his Vancouver condo when COVID-19 restrictions were in effect has been sentenced to one day in jail. A provincial court judge also ordered Mohammad Movassaghi to pay a five-thousand dollar fine and serve 18 months’ probation. He pleaded guilty to disobeying a court order, failing to comply with a health officer’s order and unlawfully purchasing grain alcohol. Judge Ellen Gordon likened his actions breaking COVID-19 restrictions to selling the powerful opioid fentanyl on the street.

A global concert promoting vaccine equality airing on YouTube next month will include Prime Minister Justin Trudeau as a speaker. Trudeau will join U-S President Joe Biden and Vice-President Kamala Harris, and French President Emmanuel Macron at the Global Citizen Vax Live Concert to Reunite the World on May 8th. Trudeau’s office confirms he will deliver a speech about the need for international co-operation to end the pandemic. Hosted by Selena Gomez, the concert will also feature performances by Jennifer Lopez, Eddie Vedder and the Foo Fighters.