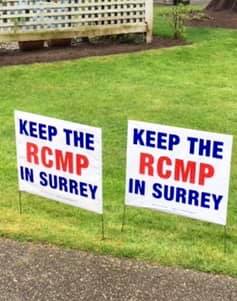 By Vanessa YbarraMay 6, 2020News
No Comments

1. Apparently some people in Surrey really don’t like the RCMP.
A video circulating online shows a man in a truck pulling up to a home, ripping the ‘Keep the RCMP in Surrey’ sign off their lawn, and then speeding away.

Ivan Scott, who is the organizer of the ‘Keep the RCMP in Surrey’ campaign says people have no right to remove the signs.
“It’s everybody’s right to demonstrate, especially on their own property what they want. Nobody has the right to take these signs, but this isn’t the first incident we’ve had. We’ve had down in Ocean Park nine signs taken away from there. It’s difficult to find out who this is.”
Scott says he has his suspicions on the person or persons behind the thefts.

2. A warning if you’re a ‘Let Go’ app user!
Surrey RCMP say people are continuing to get robbed on the app site where people post used items for others to buy, RCMP first releasing a warning back in March.
Cpl. Corporal Joanie Sidhu says people need to be smart when meeting up with a buyer.
“Always meet at at a public place during the daytime and take someone with you.”
Sidhu says you should also confirm a person cell phone number before meeting face-to-face.

2. More than $30,000 has been raised for the family whose son and daughter were killed in a crash in Chilliwack over the weekend.
The family were riding in an off-road vehicle when they somehow ended up crashing into a lake
The mom, dad and one of their children made it out, but the 10 year old boy and nine year old girl did not.
All were wearing helmets and seatbelts at the time of the crash.

3. General Monitors is getting its wheels going again.
The company says it aims to re-open most of its plants in Canada and the states in just under two weeks.
Its first quarter profits are down 90 per cent compared to last year.

4. Pharmaceutical company Pfizer’ has become testing a potential COVID-19 vaccines on people.
They’re one of more than 100 companies racing to find a cure – healthy experts calling it amazing as it typically takes more than a year to come up with a possible cure.

5. The country has smashed COVID-19 projection numbers – last week Chief Public Health Officer Dr. Theresa Tam predicted just over 38-hundred deaths – that number reaching just over 41-hundred as of today.
Still, she maintains the pandemic appears to be slowing down.