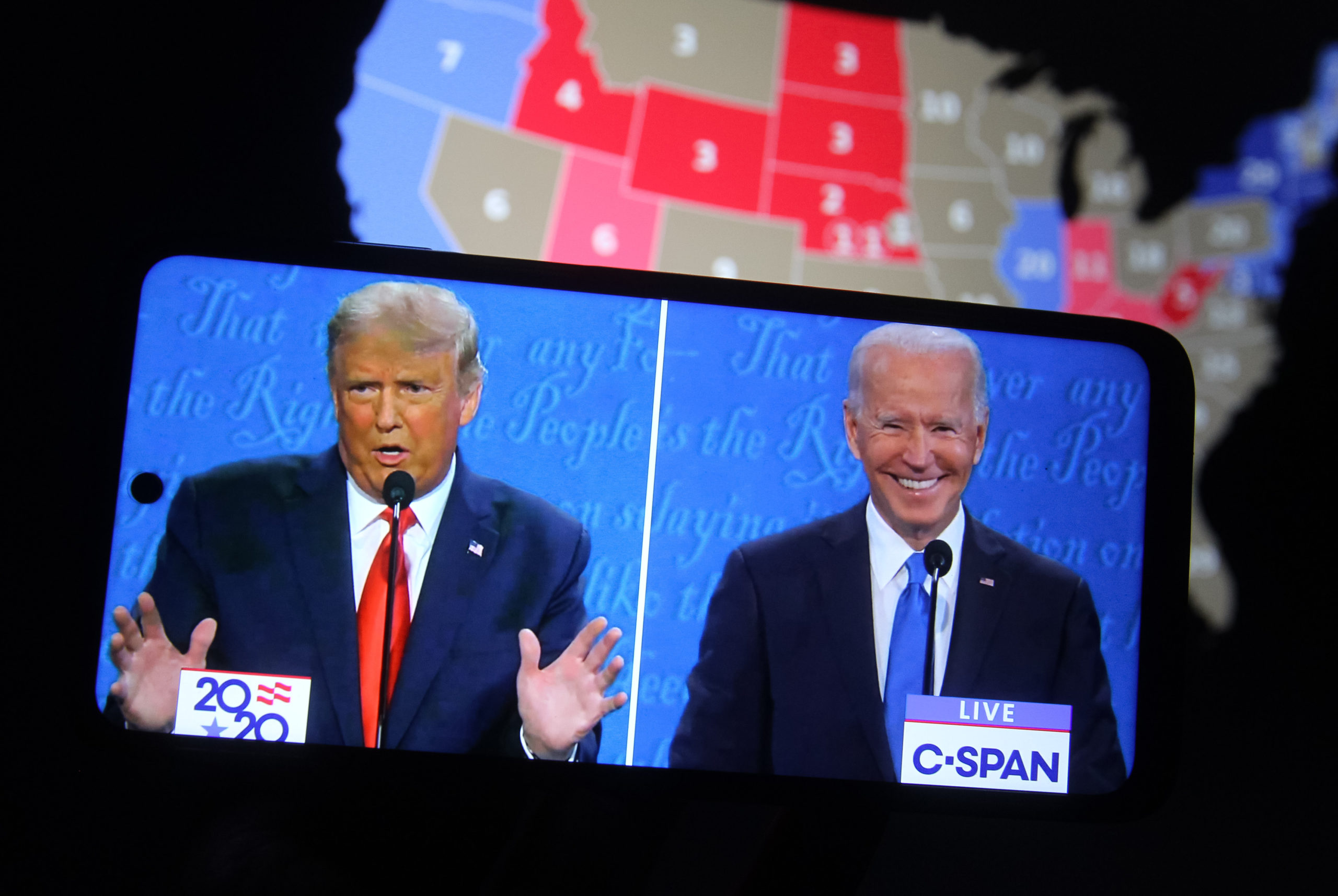 By LeslieNovember 4, 2020General
No Comments

The U-S presidency hangs in the balance as Donald Trump and Joe Biden battle for three familiar battleground states — Wisconsin, Michigan and Pennsylvania. It’s not clear when or how quickly a winner will be determined, but it could take days.  Trump made premature claims of victory, claiming he will take the election to the U-S Supreme Court to stop the counting.  Biden is urging patience, telling supporters in Delaware that the election — quote — “ain’t over until every vote is counted, every ballot is counted.”

Democrat Joe Biden has reclaimed a key part of the “blue wall” that slipped away from Democrats four years ago. Biden won Michigan and Wisconsin today, dramatically narrowing President Donald Trump’s pathway to re-election. Biden has to win one more state in order to meet the 270 Electoral College votes needed to win the White House. Meantime, Trump is trying to mount legal objections in several states Some great news though L-G-B-T-Q candidates across the U-S achieved milestone victories in yesterday’s election. Winners include a Delaware woman who will become the first transgender person in a state Senate, and the first openly gay Black men to win seats in Congress — both Democrats from New York. In the red state of Tennessee, a Republican gay man and a Democratic bisexual man will become the first openly L-G-B-T-Q members of the state House

Canada’s chief public health officer says severe cases of COVID-19 are likely still catching up to the recent spread of the illness. Doctor Theresa Tam says there’s a good chance more severe cases are on the way. She says the daily average of COVID-19 hospitalizations last week across the country was about 12-hundred — including 226 patients in intensive care. The country’s average daily death rate over the same period was 40. Doctor bonny henry reported 335 new cases of COVID-19 today in BC

The morning after election day in the U-S holds more political and economic uncertainty for Canada.  Voters across the U-S — and their northern neighbours — are in wait-and-see mode as several key battleground states remain in play.  One international affairs expert, says it looks like we may be headed to the dreaded scenario — a close race that ends up in the courts, which choose the winner.

B-C health officials are reminding everyone to keep social circles small, particularly in the Fraser Health region, the epicentre of rising case counts. The province says much of the recent transmission is connected to social gatherings and Fraser Health officials are asking residents to avoid hosting anyone from outside their household.  B-C has reported 299 new cases of COVID-19 and three more deaths, bringing the death toll from the illness to 272.  The province says three-thousand-17 cases are currently active, including 92 people who are in hospital.

Officials with Fraser Health have announced a new coronavirus testing centre opening in North Surrey on November 12.  The new site will be on King George Boulevard, near the Central City Shopping Centre in Surrey.  According to health officials, the site will offer increased access to testing and will process between 500 and 800 tests per day when operating at full capacity.  Walk-in testing will also be offered seven days a week from 11 am to 8 pm.

A 70-year-old man has died after being hit by a car in Surrey late yesterday afternoon.  It happened in the area of 104 Avenue and 128 Street around 5 “Despite all attempts to revive the 70-year-old male, he succumbed to his injuries. The driver of the vehicle remained on scene and is cooperating with police,”  Anyone who witnessed the collision or has information is asked to call Surrey RCMP.

Vancouver city council is set to consider a motion today on whether the city should make a bid for the 2030 Winter Olympics after hosting in 2010.  If the motion passes, the city would write letters to the Canadian Olympic Committee, Canadian Paralympic Committee and four local First Nations seeking input on a possible bid, and sound out the federal and provincial governments on financial backing.

Vancouver Canucks Alumni are skating at their new home rink in Surrey. Close to 30 former NHL players and other alumni association members are now scrimmaging weekly at North Surrey Sport & Ice Complex, on Monday nights, in blue-versus-white action. Canucks Alumni colours, including logo and jerseys through the years, have been painted on walls of the Surrey Knights players’ lounge, thanks to the efforts of the junior hockey team’s owner, John Craighead, an alumni member The scrimmages, closed to spectators during the COVID-19 pandemic, were previously held at Scotia Barn, the eight-rink facility in Burnaby, said Robin Wyss, the alumni association’s executive director. carrying on saying “once things open up a little bit more we’ll be able to engage the community, open it up for spectators to come watch, to watch some of their favourite past Canucks, which will be exciting for the community hopefully.”