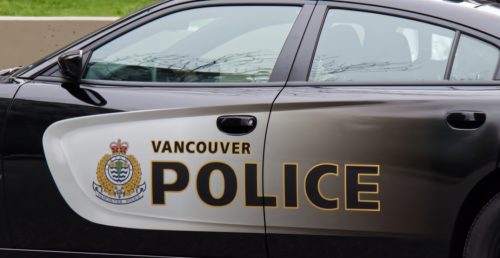 By Jeremy TubbsSeptember 28, 2022News
No Comments

An Indigenous man who was arrested alongside his young granddaughter when he tried to open a bank account for her in Vancouver’s Downtown Eastside is to make an announcement this morning. Maxwell Johnson had filed a BC Human Rights Tribunal complaint against the Vancouver Police Board over racial profiling, wrongful detention and handcuffing when the pair were arrested in 2019. Leaders of the Heiltsuk Nation and legal counsel for the Union of BC Indian Chiefs are also scheduled to be there. The BC police complaint commissioner determined in June that a public hearing was not needed into the arrest and handcuffing of Johnson and his granddaughter.

Police in Vancouver and Delta are each investigating the death of a pedestrian in their cities. Vancouver police believe a woman was struck by a charter bus downtown, and they’re asking for any witnesses to come forward. Earlier yesterday, police in Delta were called to an intersection where officers found a 60-year-old man who died in hospital of serious injuries. Police say a driver who left the scene has since come forward and is co-operating with investigators.

The RCMP Southeast District Major Crime Unit has taken over an investigation into the suspicious death of a 72-year-old woman. Police say officers with a rural division of the Mounties received information about a deceased woman inside a home in Enderby. The investigation is in its preliminary stages but police believe there is no risk to the public.

The Vancouver Airport Authority wants the public to know a simulated crash will take place near the airport tomorrow as part of an emergency response plan with the community. It says the crash will happen in a contained area at an aircraft hangar (along Miller Road), at a small site near the Fraser River, along with training activities in other buildings. The airport authority says similar exercises have been done in the past as part of an ongoing effort to provide routine emergency planning. It says normal operations at the airport won’t be affected.

The man credited for developing adult literacy across Yukon for nearly 50 years has received an award. The Yukon government says Donald Inverarity is this year’s winner of the Council of the Federation Literacy Award in recognition of his pioneering work in digital literacy and technology education. Premier Sandy Silver presented Inverarity with the award for helping countless Yukoners to improve their literacy since 1974 in practical ways including e-commerce in rural areas and financial management in First Nations communities. The territory says Inverarity has also taught life skills through Junior Achievement Canada and helped people with learning disabilities and barriers to employment.