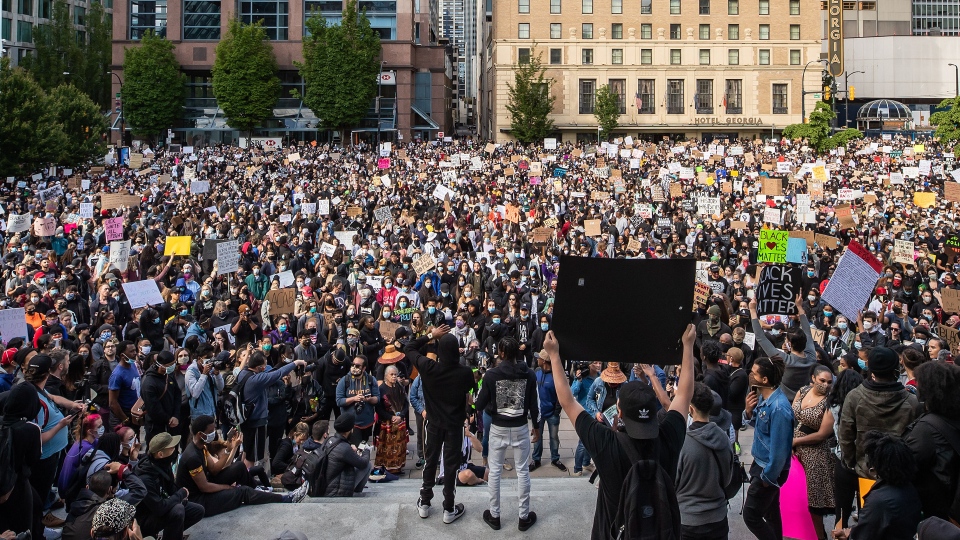 By ScooterSeptember 3, 2021News
No Comments

Some doctors and nurses are expressing frustration with the large groups of anti-vaccination Who have been protesting over the last week, particularly following the large protest outside hospitals.  Steven Fedder works as an emergency room physician at a hospital in Richmond, B-C, and he calls choosing not to get vaccinated against COVID-19 the — quote — “ultimate selfishness.”  Fedder says exhausted health-care staff are trying to be professional and not judgmental, after months of providing information on vaccines to anyone who hadn’t received a shot.  The protests follow the introduction of so-called vaccine passports and as some employers mandate immunization against COVID-19.

Metro Vancouver Transit Police are warning riders who fail to mask up that they could be fined 115-dollars.  Police say TransLink has reinstated its own mask rule, which authorizes officers to issue the tickets under the Greater Vancouver Transit Safety Regulation.  Transit police say they’re awaiting further guidance from the province about what enforcement mechanisms they’ll have.  B-C reintroduced a provincewide mask mandate on August 25th, amid rising cases driven by the now dominant and highly-contagious Delta variant.

The COVID-19 pandemic, social policy and the recovery were the main topics at the first televised debate of the federal election campaign. The Liberals’ Justin Trudeau, the Tories’ Erin O’Toole, the Bloc’s Yves-Francois Blanchet and the N-D-P’s Jagmeet Singh took part in the French-language debate on T-V-A, one of the province’s most-watched networks.  Trudeau’s minority government was elected in 2019 before the pandemic struck and upended federal priorities, which he said necessitated a fresh mandate from voters.  The other leaders accused him of unnecessarily calling the election amid a rising fourth pandemic wave.

The latest survey suggests a majority of Canadians are in favour of a COVID-19 vaccine passport leading up to this week’s rollout of a certificate system in Quebec and an announcement of one in Ontario. The Leger poll found 56 per cent of Canadian respondents say they “strongly support” provincial vaccine passports for indoor places including bars, restaurants, gyms, concert halls and festivals. Only 13 per cent were strongly opposed.  The poll also suggests Canadians were largely split on whether the reopening of in-person learning at elementary and secondary schools changed any concerns they had about the Delta variant.

B-C has reported 671 new cases of COVID-19 as well as three more deaths today. The Ministry of Health says five-thousand-872 infections are active across the province, with about 33 per cent located in the Interior Health region, nearly 29 per cent in Fraser Health and 18 per cent in the Vancouver Coastal Health region. There are 595 cases active in the Northern Health region, where the provincial health officer has reinstated restrictions on social gatherings starting Tuesday. The province says 77.1 per cent of eligible B-C residents are now fully vaccinated, while nearly 85 per cent have had their first shot. (The Canadian Press)

The B-C government says it has earmarked up to 20-million dollars to help farmers and ranchers recover from a season plagued by drought and wildfires. The Agriculture Ministry says the money will help ranchers with expenses resulting from fires and drought, such as feed, shelter, transportation and animal health. It says B-C farmers and beekeepers are also eligible to receive funding through a joint federal and provincial wildfire and drought agricultural recovery initiative. It says funding is available under the initiative to cover the costs of replacing bee colonies and equipment lost in the wildfires as well as critical infrastructure damaged by wildfire and not covered by insurance.

B-C has brought back some limits on gatherings in the NorthernHealth region because of a spike in COVID-19 cases fuelled by the Delta variant. Provincial health officer Doctor Bonnie Henry says starting September 7th, indoor gatherings will be restricted to only one other family or five guests, while outdoor gatherings will be limited to 50 people. Organized outdoor events of more than 200 people will need a COVID-19 safety plan in place. She says the new measures are in addition to the mask mandate that’s already in place across B-C.

Health Minister Adrian Dix says the COVID crisis has become a pandemic of the unvaccinated, with about 90 per cent of those in hospital and intensive care unimmunized. He adds that most of the people who aren’t vaccinated are under the age of 55.  About 78 per cent of eligible B-C residents are now fully vaccinated.