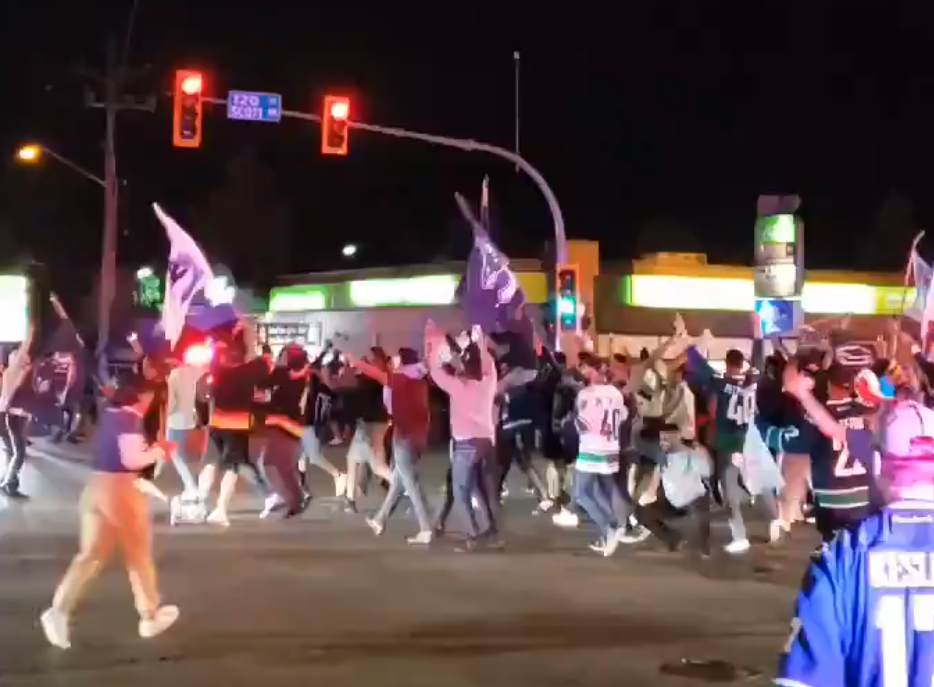 With game three of the Canucks and Golden Knights playoff series tonight, Surrey RCMP are reminding Scott Road parties to stay away.

For years Scott Road and 72nd Avenue has been a hot spot for fans to gather after the Canucks win to celebrate. More than a thousand coming out after the Canucks beat the Blues a few weeks back to advance to round two where large crowds completely took up the intersection, which is concerning for RCMP and public officials given we’re still in the middle of a global pandemic and told to, more or less, stay away from one another.

“In regular circumstances it would probably be ok but the biggest concern here is it’s a lot of people getting together. It’s difficult when there’s such a large concentration of people in a place, as much as people try to social distance, it’s not always easy.”

Cpl. Joanie Sidhu says this past Tuesday a smaller crowd of 500 people showed up, which is encouraging that people are getting the message to stay away.

“While are pleased to see some people are getting the message, it’s clear others are still not. We still want to continue to send the message out to the public that we encourage everyone to celebrate, but do so in a safe manner. Celebrate from home, celebrate virtually, but do not celebrate in large crowds where you’re putting people at risk.”

Sidhu jokes just like the 7pm frontline workers cheer, BC should make a ‘Canuck Cheer’ where people can celebrate wins from their balconies instead. Love it!