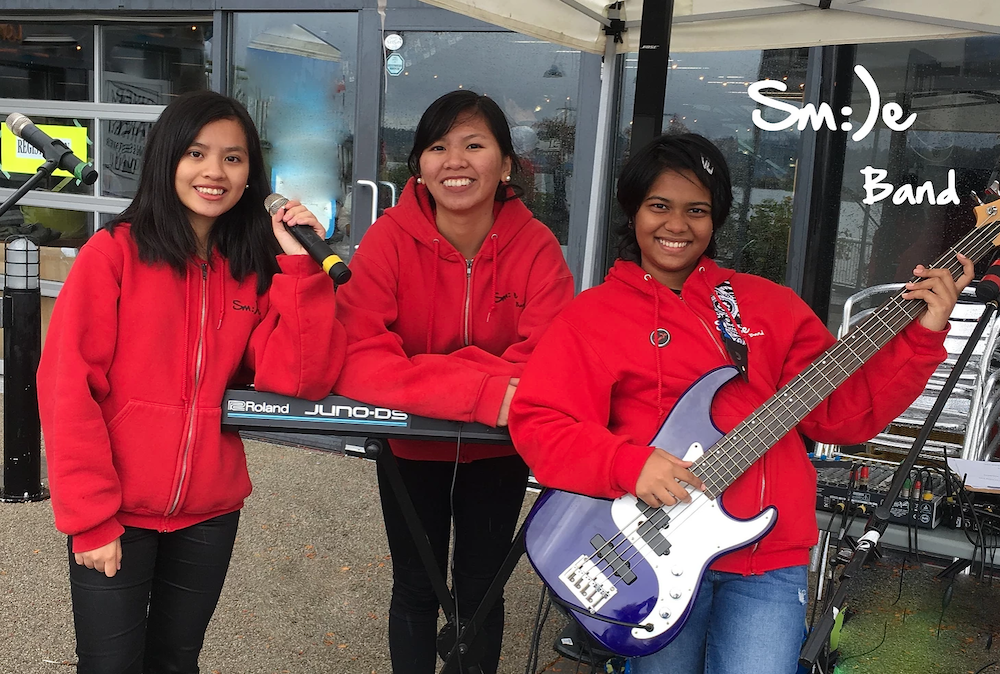 Spotlight with the Sm:)e Band

This week we are excited to feature a young all-girl group, “The Sm:)e Band”,  which coin themselves as the new sound of ABBA, the new Electronic version!! So in other words, they are similar to a pop-rock band.

The Sm:)e Band consist of two sisters Veronica (also goes by Nica) and Avery (also goes by Av) and Nikita, who joined the group in 2015.  Together the girls love to sing and blend their voices and create great harmonies. The girls create their sound by playing various instruments, Veronica on the keyboard and tambourine,  Avery with her electric guitar and Nikita on bass guitar, ukulele and drums. This is what they can currently rock on, however each of them aspire to learn more instruments and one day want to write their own songs.

First off, Avery has been noted as a talented singer. She has received awards from local to provincial awards ranging from the Most Promising Performer Award at the Youth Talent Search BC 2014, the BC Junior Talent Search 2013 second-place winner, kids division, won second place at Lynn Valley’s Got Talent 2014 and is the Edmond’s Got Talent 2013 champion. Beyond making music, Avery loves to dance to draw.

Next up is Veronica who is said to have a natural talent. Her parents discovered her musicality skills at home when they found her playing on the keyboard. Eventually, they got her into formal lessons, where she mastered her skill of using her ear in playing.

Like her younger sisters Avery, she loves to dance and draw when she isn’t doing homework or making music.

Together both sisters, Veronica and Avery received  the title of Burnaby’s Got Talent in 2016.

And the newest member of Sm:)e,  meet Nikita. From the age of six years old, Nikita has been in singing in the choir groups and breaking a leg in dance.  Speaking of breaking a leg, she also holds a black belt in karate along with many martial art awards. Her talent and motivation was discovered at Church, when a gentleman gave her a Bass guitar to pursue her dreams in music. Well, then it all started to become reality when she got the position to join the Sm:)e Band.  Other than following her dreams and jamming with her bandmates, you can catch Nikita reading or writing stories.

Where did your group name the Sm:)e Band derive from? Music is universal..how can you not smile.

This trio girl band has been making music together for about three years and they already have five original songs. They are,  Head In The Stars; I Just Wanna Have Fun; A Bit More Time; Red Hearts; and Trust. Aside from having passion for music they have a strong dedication to give back to the community. Over the past few years, the band has worked with various local charities such as Variety Club, Terry Fox Run and the Salvation Army.  The song“Red Hearts” was motivated by the work that is done by “Variety” and the song captures the inclusiveness of community and people with the line

“ Don’t focus on our differences its beautiful and what makes us who we are – We all have Red Hearts.”

The girls also did a Christmas CD in which the proceeds were donated to the Salvation Army. Aside from their original songs, you can hear them sing songs from artists such as Katy Perry, Taylor Swift, to Imagine Dragons and many others.  You can hear them sing and engage their audience as many family city events, charities, school events, workshops throughout BC.

What’s your message to other youth?

We would like to motivate other young people to believe in themselves, show everyone is important in their own way and if you stay focused and passionate, your dreams can come true.

Do you write your own music?

We have song writers but we also ad lib.

What is your biggest challenge?

Trying to get more audience participation. Some people are not into it. So we make it our personal challenge to get them involved.

How to you balance school and music?

We are home schooled. So we do our school work at night.

What do you hope to achieve?

We hope to open up for bigger people artists such as Shawn Hook, Marianas Trench. We would also like to be on Ellen. (I totally agree, who doesn’t want to be a guest on Ellen DeGeneres)

How do you work together and conquer differences amongst each other?

Communication is key. We do have different genre interests. With that we look to find similar interests and having a good time with each other. We try to learn together and try to continue building a good bond.

If you missed the #PulseFMSpotlight interview with the Sm:)e Band, click here.