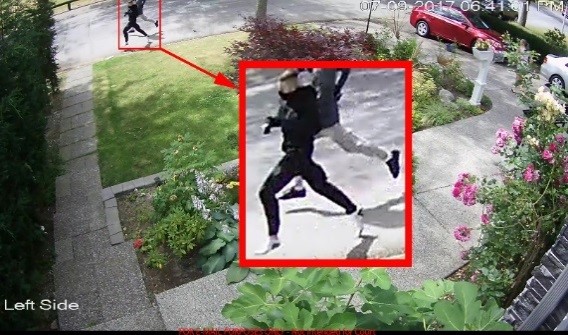 Surrey RCMP are re-appealing for help in shooting investigation

By The WebmasterJuly 9, 2018News
No Comments

The Surrey RCMP’s Serious Crime Unit is re-launching an appeal for information from the public to assist in the investigation of a shooting which occurred one year ago.

On July 9th, 2017, at aound 3:30 pm, the Surrey RCMP received multiple 911 calls reporting a shooting between parties associated to two vehicles in the 7700 block of 147A Street. The Surrey RCMP attended the location and located an adult female suffering from a gunshot wound. Although investigators believe this was a targeted shooting, it is believed that the victim was not the intended target.

A photo of two suspects was captured on home surveillance video and is now being distributed to the public to assist in identifying them. The suspects are also believed to be associated to a red pickup truck which was located on fire a short distance away in the 9000 block of 150th Street. The pickup was determined to be stolen out of the Vernon area earlier in the day on July 9th.

If you have any information about this incident, the stolen vehicle out of Vernon, or the suspects please call the Surrey RCMP at 604-599-0502, or contact Crime Stoppers if you wish to remain anonymous, at 1-800-222-8477 or www.solvecrime.ca