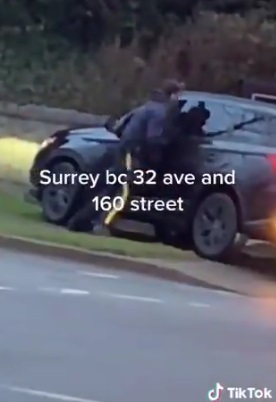 A video of an altercation between a Surrey RCMP officer and a driver in South Surrey (around 160th Street and 32nd Avenue) has gone viral on social media.

According to Corporal Elenore Sturko from Surrey RCMP, officers were dispatched to deal with a possible impaired driver pulled over around 7:45am today (Jan 24, 2020).

The driver ended up fleeing the scene (after being awoken by the officer) and the vehicle was later found abandoned on 143 A street.

Although police dogs were not able to locate the suspect, RCMP ceased the vehicle. A search warrant will be conducted and police plan to follow up with registered owner.

Police say they are thankful for people in the public who phoned in to report this incident.