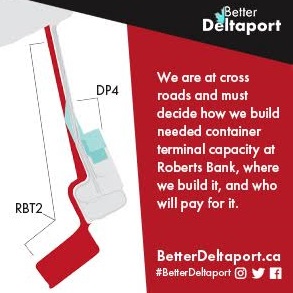 Have you heard about the “Better Delta Port” Campaign?

You may have heard by now that The Vancouver Fraser Port Authority (a government agency) is getting into the terminal business with the Roberts Bank Terminal 2 Project. It’s being described as a whole new terminal island to be built on the ocean.

According to the website www.betterdeltaport.ca , the ocean shipping industry is now “at a crossroads and must decide how and where” we build new terminals , and who will pay for it.

The “Better DeltaPort” Campaign is a movement that is lobbying for a something called “The Canadian DeltaPort Project”. It’s supposed to be a Global Container Terminals (GCT) smart, phased, and environmentally-conscious plan that will provide capacity at Roberts Bank in Delta through the addition of a fourth berth to the existing GCT Deltaport Terminal.

You can learn more about it at wwww.betterdeltaport.ca