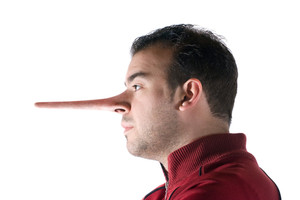 My day kinda started with a little white lie.

First of all, let’s talk about a recent survey that says 41% of people tell at least one white lie per week at work.

White Lies such as:

I’m sick and not feeling well

I already made plans

and the traffic was crazy and that’s why I’m late.

(Those are the top three white lies by people who don’t really like their jobs, anyway)

Today it had nothing to do with my job. What it had to do with was money.

I’m at the cashier at a local supermarket and the cashier asks me would I like to donate to a certain organization that is very well known involving ‘hearts and strokes.’

(without totally giving it away;)

I told her, ‘I already contributed.’

I haven’t given a cent to that organization, and here’s why.

My pet peeve is just that, when organizations partnered up with organizers to entice you into giving.

The girl guides do it at the liquor store. Heck, There’s a guy in WR/SS who’s always playing his guitar for a couple bucks that I always give money to.

The money is for him and he’s making an effort.

A cashier asking me if I’d like to donate to, ‘this or that organization?’

I usually give them a white lie instead.

By the way, Most popular days for a White Lie?

Fridays is number one followed by Monday and Wednesday.