Move Over Nick Jonas, Ariana Grande Is Stepping In As A Coach On The Voice

Nick Jonas is stepping away from his comfy chair on The Voice as the show welcomes Arian Grande to the hot seat! The singer posted to Instagram to announce that she will be one of the 4 coaches for season 21 of The Voice! We’re assuming Nick will be off promoting his new album, but the best thing about The Voice coaches is they usually come back! Ariana will Join Kelly Clarkson, John Legend and Blake Shelton as a coach for season 21 of The Voice

Brittney Spears Cried Over The Trailer For ‘Framing Britney’

Everyone has been wondering WHAT DOES BRITNEY THINK ABOUT THE DOCUMENTARY.. Well she finally told us though Instagram and surprisingly she did not like what she saw..

Take a look at what she had to say below!

Michael Strahan is rocking a new look, staying away from his signature gap tooth!

The Good Morning America host posted to his social media sharing his new smile, and before anyone goes and hates on him for being superficial blah blah blah.. let the man live! He says in the video, everyone on my team told me not too, but I wanted to do this for myself. Not to say he didn’t look good before, but if this is hat he wants, let him do it!!

Meghan Markle’s new biographer thinks the duchess has a “good chance” of becoming US president — but will “struggle” under the microscope of politics because of her “clear sensitivity.”

“The prospect of Meghan running for president is possible and I’d even say likely,” Tom Bower, who reportedly signed a six-figure deal to write about Prince Harry’s wife, told Closer magazine in the UK. He said “I really believe it’s where she sees herself going, I think she has a good chance of getting into the White House,” he insisted — noting that the role could finally see her reuniting with the royal family she ripped in her TV tell-all.

CRAZY! But maybe lets stay away from celebrities in the White House..

A car insurance rebate mailed to a Coquitlam woman this week turned out to be a huge disappointment when the Insurance Corporation of British Columbia (ICBC) sent her a cheque for only $1.

“I was in disbelief and I thought: ‘this has got to be some kind of mistake or joke,’” said Shari O’Neill, whose post of a photo of the cheque went viral on social media.

The cheque is one of the first batch being mailed out by ICBC after a cyber attack hit the third-party cheque vendor, stalling the initiative.  O’Neill had two cars insured during the qualifying period of April 1 to Sept. 30, a 1994 Toyota Tacoma and a 2017 GMC Yukon, and paid about $200 a month each for the two vehicles, with a 43% discount.

She expected to receive at least $200 back for the two cars after the B.C. government said cheques would range from $25 to $400 when the rebate plan was announced in February….. 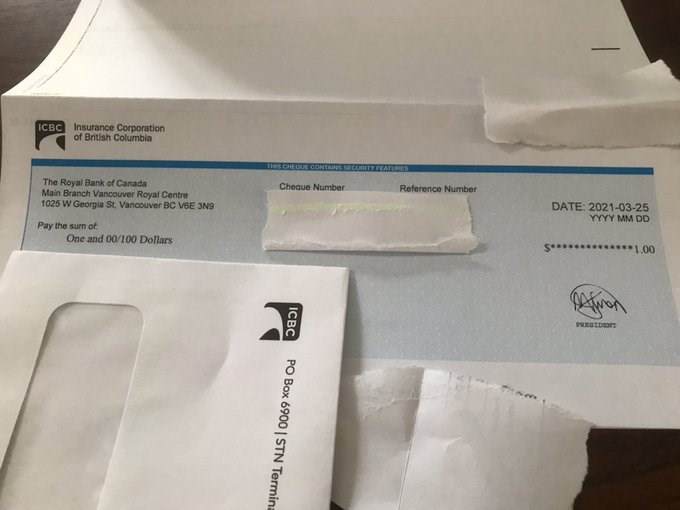