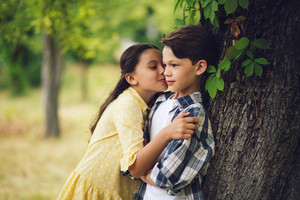 When was your first kiss

By The WebmasterMarch 28, 2019Community
No Comments

I can’t remember the boys name but I do remember it was in grade 1. That was the first time I had a quick little peck on the lips from a boy, a boy I liked too. I liked boys at a young age, I always had a boyfriend, very innocently though.  They would chase me around our school to kiss me but I was always so fast and I would get away from them. Until one day I realized wait, I want them to catch me and so I slowed down and that is when I got my first kiss. It happened in a cylinder block thingy that was in our playground, all the cool kids hung out in it and kissed.

I received my first kiss when I was 4 years old. I was going to pre-school at the time and I would be picked up by the schools bus. (Van) My first girlfriend was also four and would get on the bus a little after me. She would step, ‘into daddies office in the back of the bus and we would – as they say in Britain, ‘Snog’ the whole way to school. That happened for a few weeks until one day we didn’t stop at where she lived and never did again. I was dumped.