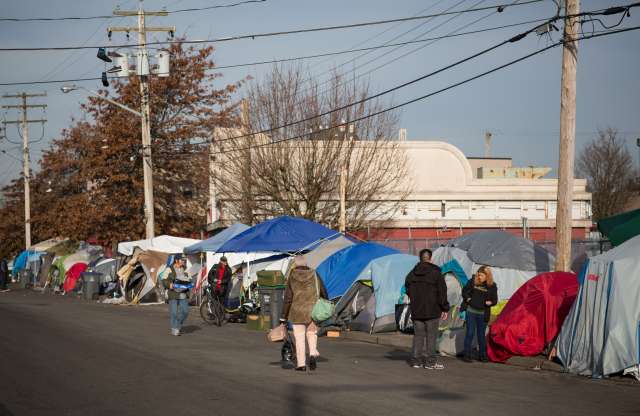 By Vanessa YbarraMay 4, 2018General
No Comments

On Monday I visited Whalley’s ‘Tent City’ for this week’s Vanessa on Assignment. I’m embarrassed to admit  I’ve never visited what’s known as Surrey’s biggest eyesore on 135-A Street before but it’s something I’ll never forget. Arriving to see dozens of stained and ripped up tents lining the street, almost every person inside battling some form of a drug or alcohol addiction, was tough. Being a big animal lover it was just as tough to see the number of stray dogs running around many looking in dire need of a meal. The purpose of my visit was to interview local business owners on how the infamous neighbourhood is affecting their bottom line. I have to say after spending ten minutes walking along the street and King George Boulevard I can more than sympathize with the stresses they told me they were facing. Surprisingly, 135-A wasn’t all that dirty at least when I was there. It was the heaps of garbage and discarded needles strewn across the parking lot directly behind tent city that was the most disgusting. Then there was the smell. Everywhere you walked a stench of alcohol and dirt followed that was hard to shake off even after I had left the strip. It’s no wonder everywhere you looked there were boarded-up buildings whose business owners had had enough or couldn’t make it financially given the mess. There is one thing I’ll say though. Every person I spoke on 135-A was friendly and couldn’t have been more helpful steering me in the right direction for my interviews. If only the area they call home weren’t so dark.