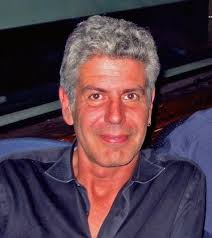 Those who knew and loved his show are in shock today with the news of the passing of CNN host Anthony Bourdain. He was found earlier today in his hotel room in France – dead by an apparent suicide by hanging. Anthony Bourdain was a hero to those who didn’t have a privileged life. He was a man who overcame personal demons, from drug addiction on the mean streets of New York City to a show on CNN that is/was so much more than just food. Tony Bourdain could use his words and images and tell you a story about a place on this earth you may never ever see – and he was your perfect tour guide. He was able to be an historian, a reporter, a political correspondent, a realist, and a genius. He didn’t hold back. The news breaking today of his death has so many people not truly understanding why a man who seemed to have the greatest job on earth – why he would choose to end his life in a hotel room in France. The culinary world also shocked to hear the news. Local Chef, Restauranteur and Businessman Vikram Vij called Bourdain the, ‘Keith Richards’ of the restaurant industry. Tony Bourdain was 61 years old, he leaves behind a 10 year old daughter and a legion of fans (myself included) that are heartbroken and devastated by this news. In Canada, suicide is one of the top 10 leading causes of death. 11 people end their lives in this country every day. If you feel you need help please call:

We need you here.