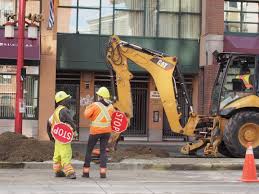 RCMP are launching a new campaign this Friday along side the Work Zone Safety Alliance and WorkSafeBC. It’s called the BC Cone Zone Campaign. This is the 9th year the campaign has happened mainly due to the amount of people who have lost their lives while working at the side of our roadways. Between 2009 and 2018 13 roadside workers dead, 213 injured. During the campaign police will be looking for distracted drivers, those who don’t obey flaggers, and something I have never heard of and after watching what happened coming up KGB this morning clearly the drivers approaching a road crew didn’t know this either.

From the rcmp’s release today, ‘Under the “Slow Down, Move Over” legislation, drivers should be prepared to reduce speed and move over to an open lane when driving near a vehicle with flashing amber, red or blue lights.’

I’m approaching a lane closure with crews coming up KGB and I’m in the right lane. There are two vehicles behind me and rather than slow down and move over like they’re supposed to do according to the press release, both vehicles hit the gas and went speeding by me then moved over. Both less than 50 feet from the workers. The second vehicle went past me and had to get over real fast. That driver was so close to the workers I thought they were going to run into the back of the work truck with the arrow sign on the back.

That’s what the police, along with WortkSafeBC, and Work Zone Safety Alliance are going to look for throughout the summer.

Again, they’ll officially announce the launch of BC Cone Zone Campaign on Friday.