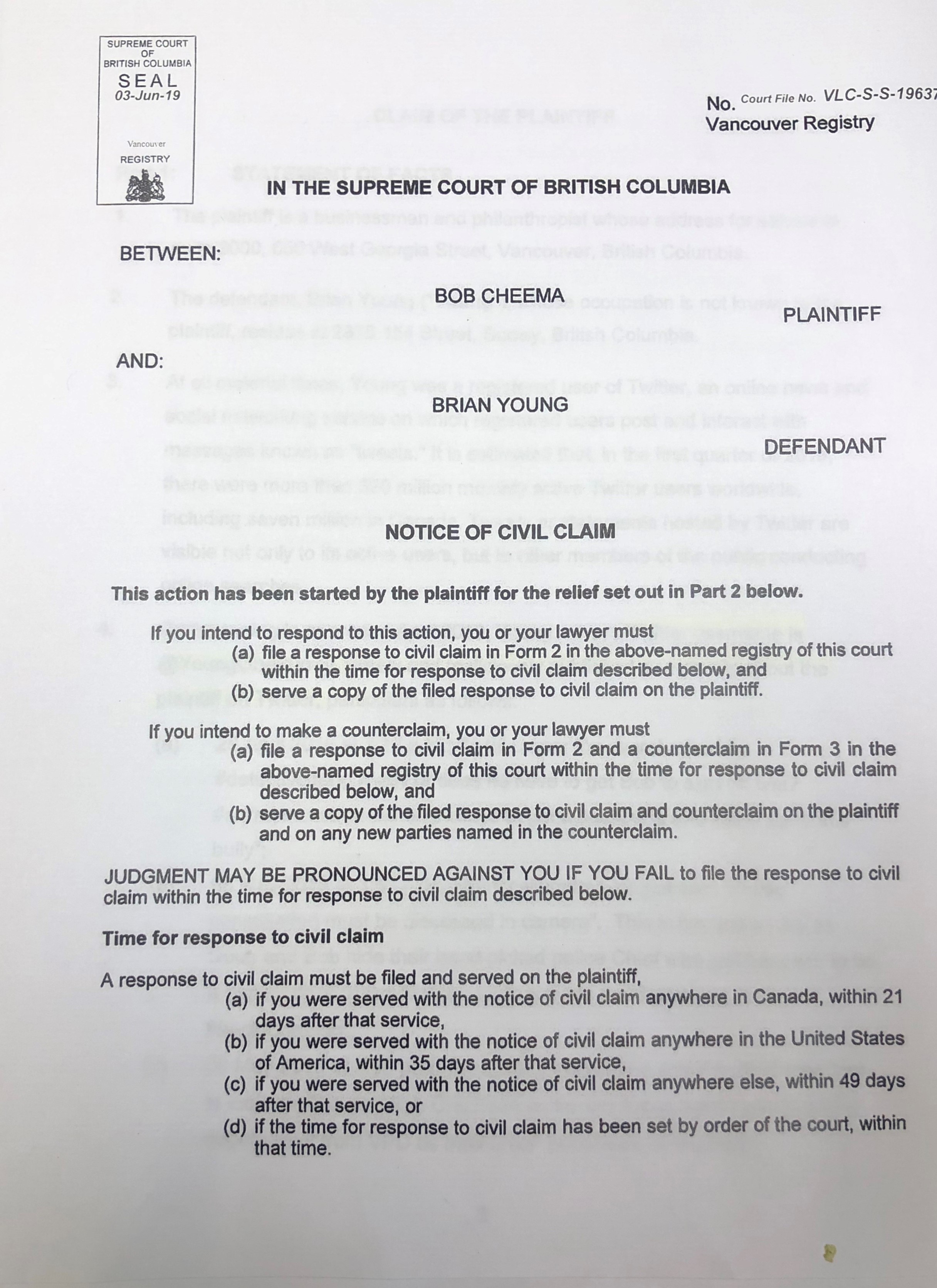 An architect of Surrey Doug McCallum’s successful bid for mayor is suing a man he claims defamed him on Twitter.
Brian Young is swinging back, alleging in a Response to Civil Claim that Bob Cheema told Young he spent $300,000 on the mayor’s campaign and that he controls South Asian media by “paying host (sic) to report my stories.”

Cheema is suing Young for defamation for tweets posted to a Twitter account.
A Notice of Civil Claim was filed in B.C. Supreme Court in Vancouver on June 3 this year.
The claim, obtained by Pulse FM, alleges that Young, using the Twitter name @YoungOneSurrey “falsely and maliciously published statements about the plaintiff on Twitter.”
The tweets cited in the Notice of Claim include one on May 7 at 7:25 a.m. stating: “BOB CHEEMA – Doug thanked him in his acceptance speech. 1 of 3 people he thanked. Bob is making huge $$$ now as you know. #surreybc #backroombob #bobanddoug”
Young’s Response to Civil Claim was filed in B.C. Supreme Court in Vancouver on June 24.
That response, also obtained by Pulse FM, states that the above tweet relied on the mayor’s acceptance speech, where he publicly thanked Cheema.
It also states that Cheema told Young “he’s only in the back room, hence #backroombob.”
The response to the civil claim also states that the tweet was “not capable of being defamatory” to Cheema.
Cheema requests a restraint against Young from posting similar tweets, as well as general and punitive damages.
Young, former president of the Cloverdale Chamber of Commerce (2010-12 and 2013-14) and current president of Young Ventures Ltd., denies the claims.
“The defendant denies each and every allegation contained in the Notice of Civil Claim,” says the Response to Civil Claim.
The Response to Civil Claim argues that in different instances, the tweets were either true, qualified privilege (fair comment), and that they weren’t malicious or harmful to Cheema.
The Response to Civil Claim also states that Young was actively supporting McCallum’s campaign, but warned him of “overly associating” with Cheema or other developers.
In about August, 2018, Young allegedly had a meeting with McCallum where, to Young’s surprise, Cheema attended.
“I am not involved in the front line; you will never see me in photos or videos with Doug. I’m only in the back room,” the Response to Civil Claim alleges Cheema said to Young. “I spent over $300,000 on the campaign so far. I control the South Asian media by paying host to run my stories.”
Young also alleges in his Response to Civil Claim that Cheema told him he had a unique way of gathering information.
“I paid cleaning staff at Surrey city hall and they retreived items from councillors garbage,” the Response to Civil Claim alleges Cheema said.
It also alleges Cheema said he already has a police chief picked out.
“I already have a chief of police picked,” the Response to Civil Claim alleges Cheema said to Young in a phone conversation. “He is currently the Deputy Chief at the Vancouver Police Department.”
Pulse FM called Cheema for comment on those allegations Tuesday morning and he declined. Cheema noted that he never offers comment publicly.
None of the allegations, by Cheema or Young, have been proven in court.