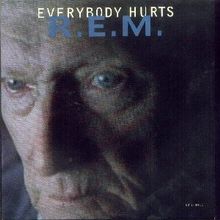 By The WebmasterJanuary 3, 2018News
No Comments

Today’s Flashback 90’s song definitely has a great message, REM’s Everybody Hurts. It was released as a single in 1993, it doesn’t seem at all like it is that old! It peaked at number twenty nine on the Billboard Hot 100, and made it to number 8 on the Canadian Singles Chart.

If you listen to the words it really resonates with most anyone at sometime in their life. “If you feel like you’re alone, no, no, no, you’re not alone.” My favourite line in the song. What is yours?

When your day is long
And the night, the night is yours alone
When you’re sure you’ve had enough
Of this life, well hang on

Sometimes everything is wrong
Now it’s time to sing along
When your day is night alone (hold on, hold on)
If you feel like letting go (hold on)
If you think you’ve had too much
Of this life, well hang on