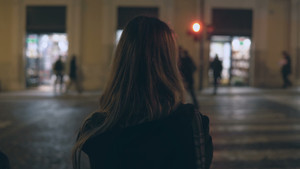 A tweet sent back on July 12th has the internet buzzing with stories. Sadly, they’re not good ones. A woman from New Jersey took to twitter to tell the story of being approached by another woman while walking down the street. It’s what the woman said that was the reason for the original tweet. She said, ‘please pretend to be my friend this man has been following me for 6 blocks.’ The woman immediately hugged the frightened lady and they pretended like they were best of friends. The man swore, turned, and walked back in the opposite direction. Truly frightening. So @gabriellarichh (two h’s) tweeted the story and now other woman are coming forward with their stories of being harassed and followed. Women on Twitter were so inspired by this one tweet that they wanted to tell their story as well. And there are a lot of them. Wasn’t too long ago we had a serial molester walking the streets of Surrey preying on women walking alone. Fortunately, that creep was caught. It is believed he is responsible for 5 incidents that took place back in April and May. You may have forgotten. His victims have not. Have our streets become too dangerous for a woman to walk alone? Given my sex, I can’t answer that question. But if a female can’t walk the streets alone in fear of being stalked, we have a very very big problem on our hands.