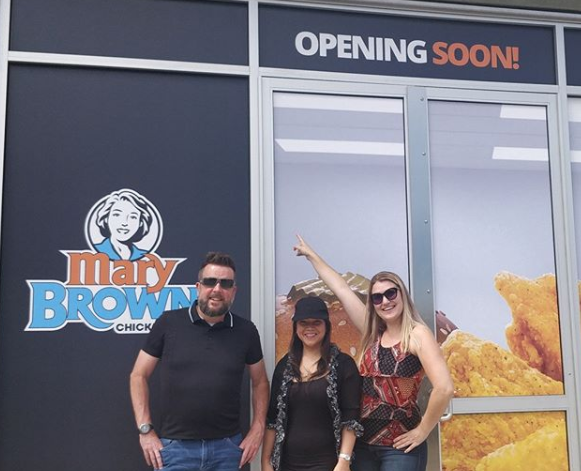 By Vanessa YbarraJuly 15, 2019Community
No Comments

Mother Mary, it REALLY is true!

If you’re wondering who is Mary Brown? Check out this writeup from the marybrowns.com website..

Who is Mary Brown?

“Mary was a lovely lady with an incredible recipe for southern fried chicken. After serving it to her family for years, her husband decided that the rest of the world deserved to eat as well as he did. He met with two wise gents from Newfoundland, who immediately fell in love with Mary’s chicken (and likely Mary too, but that’s another story). They bought the recipe, and started a chicken revolution. (Dramatic yes, but we take our chicken very seriously.) It seemed only fitting that the restaurant was named Mary Brown’s in honour of the woman behind the recipe.

The first Mary Browns opened up in Newfounland in 1969. By 1972 two more stores opened in Ontario in Oshawa and Mississauga. From there, growth expanded west to Alberta, back east to the Maritimes, out to the Prairies and now all the way to British Columbia!

The most excited for the opening is Pulse FM ‘The Ride’ Host Neil Morrison. Hi sNewfie friend has bragged about how Mary Brown’s is hands down THE best chicken takeout for years and now finally gets to try it for himself! Let the taste testing begin!

And PSSSST! Become a Club Pulse member for your chance to win a free Mary Brown's dinner, with one free giveaway each month! Sign up here, and we'll see you at the opening!