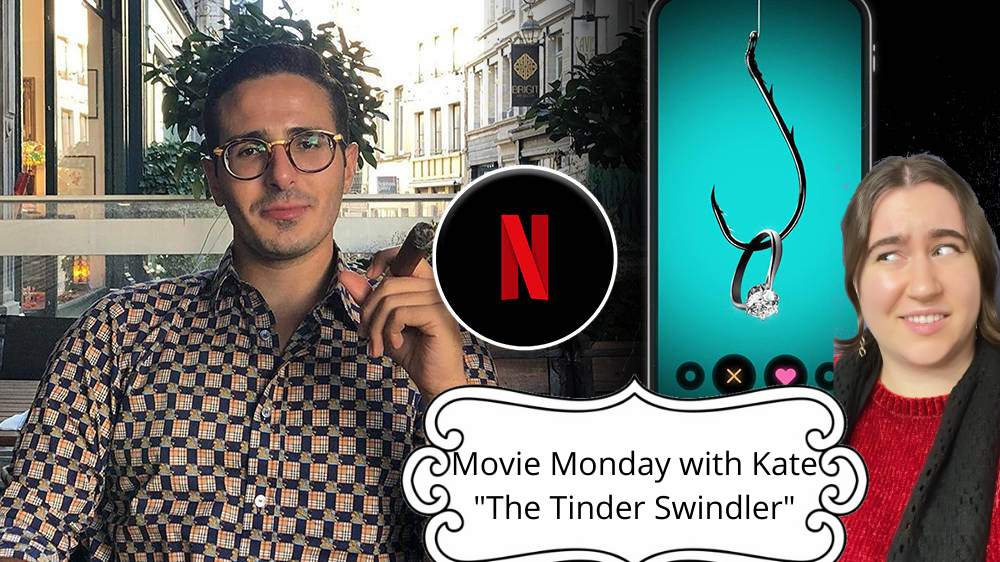 Welcome back to Movie Monday’s with Kate and HAPPY VALENTINE’S DAY!. I decided to give into the hype and watch the documentary it seems everyone is talking about these days… The Tinder Swindler! The fact that I’m posting this on Valentine’s day is just a coincidence hahah but lets get into it!

For those of you who may not be familiar with it, here’s how Google describes the movie:

​​“The Tinder Swindler “tells the shocking story of a serial scammer Simon Leviev, who posed as a billionaire playboy on Tinder and the women who set out to take him down after being scammed.

I have many thoughts about this movie, first of all I need to talk about the editing and production quality because WOW! True crime is inherently interesting, but I don’t think it would have held my attention for as long as it did without the directors good eye. It was very well done and I watched the whole thing without pausing. I was drawn in.

This is a very great movie to watch, especially if you’re in a similar situation to me – young, single, looking for “prince charming”. There is a lot of room for deceit when someone is not ethical and preys on emotions to get what they want, and online platforms like dating apps is a breeding ground for things like that to thrive. You can never be too careful and this movie is a great reminder of that.

These woman, no doubt were drawn in because of the way he “branded” himself. He appeared very wealthy at first glance of his photos. He created a whole identity on social media that made him seem that we was the son of a billionaire in the diamond industry. Key word “seem” but we will get into that a little later.

The woman were swept off of their feet being wine and dined, going to 5 star hotels for coffee dates, flying on private planes all over the world and receiving luxury gifts. But these woman did not strike me as the “gold-digger” type that a lot of critics are calling them. They genuinely seemed caring and simply fascinated with his lifestyle because it was so far from their own. As one woman said “it was like living in a movie”.

As the relationship progressed, they began having deep feeling for him. He would tell them things like “this is forever, have my babies, live with me, i love you” etc etc etc.. The woman felt like they were in a fantasy.

But this is where things take a turn. He knew that these woman wanted a “movie-like type of love” and would do anything for him. He would wait at least 6 months before revealing his alleged “enemies” are after him and his money from the diamond business. He would send photos of his “body guard” all beat up with blood all over his head and send distressed voice memos that he is in deep danger. He would say his security team advises he stop using his own credit cards because the so-called “enemies” were tracking his location based on this. So he would ask these woman who he love bombed and had them form emotional attachments to  help him out and do financial favours till he’s in the clear with his “enemies”.

Like I said before, these women had been spending the last 6 months in a fairy tale and falling in love with Simon, so this did not register as a red-flag or a scam. They wanted to help.

The woman however, were not super financially flexible. He would need thousands of dollars to uphold his business deals and lifestyle, so he had the woman take out loans from banks while re-assuring the woman that he would pay them back soon plus a profit, by giving back way more than he “borrowed”. This continued on and on with multiple woman. Also, something to mention is that he told the woman that the enemies know their names as well so they had to send Simon cash and not their credit card so his spending would be “untraceable”.

But here’s what he was doing… He was NEVER spending his own money. He would start getting woman to send him thousands of dollars about 6 months into the relationship, and with that money he was luring his new tinder matches in. Wine and dining, private jetting, and shopping for the new women he would later scam… and keep the extra money for himself. It’s an emotional scheme and the worst part is that he was able to get away with it because he made sure the transactions were never traceable.

He would eventually “pay back” the women who loaned him money with a cheque worth 3 times what they sent him as a thank you along with a voice message saying things like “you were there for me at my lowest, thank you baby I love you so much”. But when the women would go to cash it in, the cheques would bounce because they were… you guessed it, FAKE!

The woman would then call him and this is when a fight would break out between them. He would say the money takes time, the woman would panic, and this is when they would blow up and break up. But then he’d go on to scam more women and the previous scammers would be in crazy debt. One woman actually took out loans from 9 different banks to help him.

One woman was scammed out of $250,000 so naturally, she didn’t let this go and decided to contact the police and AMEX and go after him. Luckily for her, AMEX was aware of him and they were building a case but needed more proof since he was strategically doing everything in an untraceable way. Then.. the chase was on.

That is all I’ll say for now because I really do not want to give you too many spoilers, especially for the end!

But, let’s talk about my official review.

Would I ever watch it again? Naaa. Am I happy I wanted it? Absolutely!

There’s no doubt this movie is huge in pop culture right now, based on the multiple memes of Simon that are circulating the internet right now. But more than that, it’s a good reminder to not always trust people and really look at things logically. It’s sad because these women are probably looking back at this experience and feeling pretty regretful that they didn’t see the signs.. but are happy that it can serve as a cautionary tale for others who could find themselves in similar situations.

I highly recommend watching this. As I mentioned in the beginning of the blog, the editing was superb! A great watch for a monday night in!

What move should I watch next? Let me know on facebook @Pulse1077!