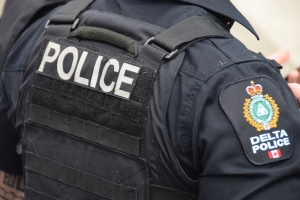 By Vanessa YbarraFebruary 18, 2019News
No Comments

Delta Police attended a residence on the 5800 block of 60th Avenue in Ladner shortly before midnight on Sunday.

As the incident progressed the Lower Mainland District Emergency Response Team, negotiators, and the integrated Police Dog Service were called in for assistance.

Delta Police obtained a warrant and negotiators continued working to convince the man to surrender.

“Fortunately negotiators were successful and the man surrendered to police before 7 a.m., February 18,” said Cris Leykauf, spokesperson for Delta Police. “We’re very pleased that there no injuries sustained by any person during this event.”

Contrary to reports on social media, there were no gunshots fired during this incident. The suspect is currently in police custody.