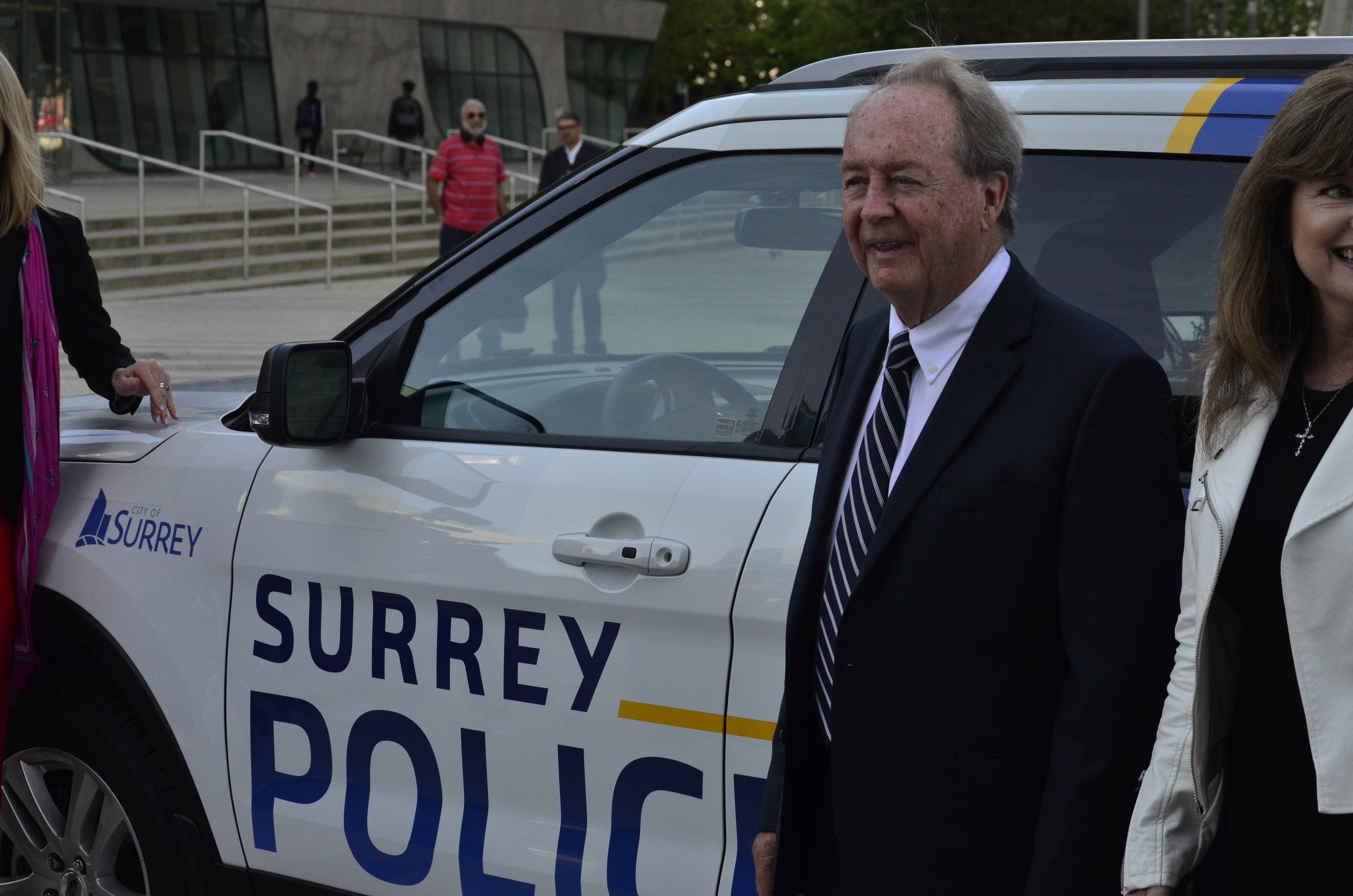 By LeslieOctober 5, 2020News
No Comments

Mayor of Surrey Doug McCallum says he’s appalled that Liberal Leader Andrew Wilkinson would play politics with the public safety of his residents.  He’s reacting to Wilkinson’s election promise to put on hold the transition from R-C-M-P to a local police force and then call a referendum for residents.  McCallum says the new police force is a “done deal,” and the Liberal interference in local politics should concern all municipal governments.  The NDP is calling Wilkinson’s move a desperate act and that it shows blatant disrespect for the city and citizens of Surrey.

The N-D-P is promising to give drivers a pandemic rebate on the money ICBC saved during the pandemic.  The government said earlier this year that a reduction in crashes during the pandemic saved the public auto insurer hundreds of millions.  The New Democrats say the profits generated will be given back in the form of a rebate — if the N-D-P is re-elected.  The COVID rebate would be paid at the same time as when the average 20 per cent rate reduction is applied next May.

B-C is reporting 358 new cases of COVID-19 over the past three days. Provincial health officer Dr. Bonnie Henry says there have also been four additional deaths — bringing the total to 242. But modelling figures Henry presented today shows the return to school has not amplified transmission rates in the province. She says more cases are being found among young children because testing rates have increased but still only seven in one-thousand are testing positive.

Meanwhile, The World Health Organization is estimating 10 per cent of the global population has been infected with COVID-19.  Based on the current world population of about 7.6 billion, that would amount to more than 760 million people.

No new inpatients are being admitted to Delta Hospital due to an outbreak of COVID-19. The Fraser Health Authority says scheduled daycare surgeries will continue and the emergency department will remain open. But it says any patients needing to be admitted will be transferred to other hospitals. The authority says 18 patients and 17 staff members have been diagnosed with COVID-19 since the outbreak was identified in mid-September, including seven patients who died.

Surrey RCMP is asking the public for video to assist in the on-going investigation of a shooting that occurred inside a residence in the 5800-block of 129 Street on October 3,
The victim remains in the hospital in critical, but stable condition. The investigation is continuing to determine if he was the intended target of this shooting.
Investigators are requesting dash-cam video from anyone who was in the area of the shooting, during the evening of October 2, and the early morning hours of October 3, 2020.

The new leader of the Green Party says having more diversity at the table means better public policy.  Annamie Paul, who is Black and Jewish, says it is important to have people like her in federal politics.  A non-practising lawyer who has spent much of her career in international institutions, Paul won the Green leadership this weekend, succeeding Elizabeth May.

Applications for the new federal COVID-19 benefits are open today, including financial support for those forced to miss work to care for a child or loved one because of COVID-19.  The federal government anticipates 700-thousand Canadians will apply for the caregiver benefit, which provides 500-dollars a week for up to 26 weeks when one person misses more than half a week of work to look after a family member.  Canadians will also be able to access a new sick-leave benefit that pays up to one-thousand dollars over two weeks for those unable to work because they have contracted COVID-19 or are forced to self-isolate due to the virus.

Doctors say U-S President Donald Trump’s short motorcade ride to wave to his supporters outside the hospital where he is being treated for COVID-19 was not only unnecessary, it was dangerous for his secret service agents.  The White House says the brief excursion was cleared by Trump’s medical team, and appropriate precautions were taken.  But critics note the specially built S-U-V is sealed airtight against chemical attacks, putting those inside at extreme risk of contracting the virus.  One doctor at the hospital –where Trump is being treated — tweeted that the president put the lives of the agents at risk for political theatre.

The Grinch may not be able to steal Christmas, but COVID is sure putting a damper on celebrations. A statement from the Vancouver Christmas Market says current safety guidelines and ever-changing directives mean they could not get approval to hold the 2020 market. It says organizers have worked tirelessly and exhausted all avenues to get operational, but they needed to prioritize the safety of staff, vendors and guests. The statement says the market is postponed until 2021.

The Bose Farms Corn Maze was temporarily closed Saturday after “extreme acts of vandalism.” Owners of the maze, located in surrey reported on Facebook yesterday that it had to close due to vandalism. Photographs shared on Facebook show that a number of plastic chairs were destroyed. Aerial images show sections of the maze damaged. The police have opened an investigation, and no arrests have been made. “Surrey RCMP is asking anyone with information about this incident to contact Surrey RCMP Next weekend is to be the last weekend of the season. but the maze will be open

Coquitlam R-C-M-P say they have found the owner of a large amount of cash found at a Tim Hortons outlet in June. Police say a 42-year-old man showed up the police detachment in the city on Friday to claim the money left behind in a bag on June 20th. The Mounties say video footage confirmed the man’s identity and he provided details about the incident that only the rightful owner
of the money would know. They also say investigators found no evidence to suggest that the money was obtained illegally so it was returned to the man — but they still won’t say how much cash was in the bag