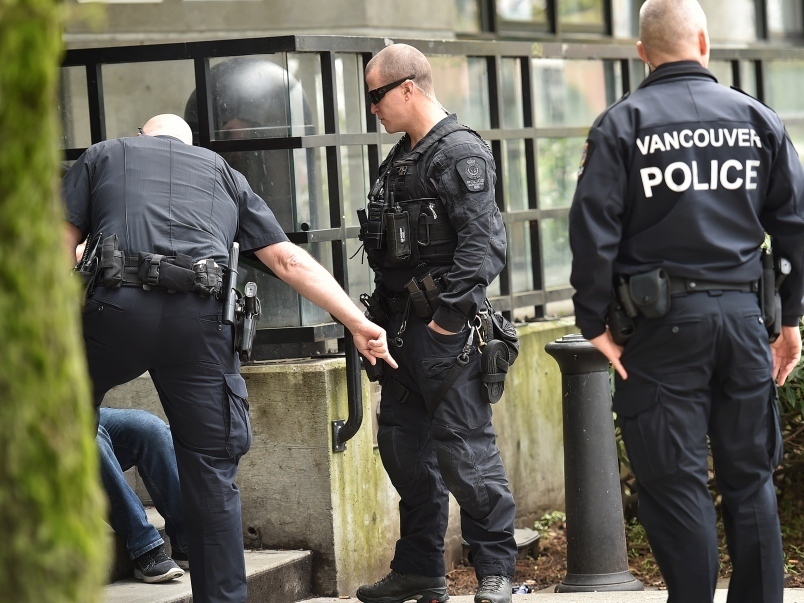 By Jeremy TubbsOctober 24, 2022News
No Comments

Members of the Vancouver Police Board are expected to attend an apology ceremony in Bella Coola this morning in connection with the arrest of an Indigenous man and his granddaughter outside a bank. Maxwell Johnson and his 12-year-old granddaughter were detained and handcuffed after trying to open an account for the girl at a downtown Vancouver Bank of Montreal branch in December 2019. But yesterday, the Heiltsuk (HAIL-tsuk) Nation issued a statement saying it’s possible the two officers involved in the arrest won’t be attending and the traditional ceremony can’t happen unless those who caused the harm are present. The ceremony is meant to mark the start of co-operation between the board, the Heiltsuk, and the Union of BC Indian Chiefs as part of initiatives under the settlement announced in September.

Victoria’s police chief says the stabbing death of an on-duty RCMP officer at a Burnaby park is a “call to action” to deal with significant gaps in mental health care and addiction. Del Manak says his department will prioritize safety in its approach to dealing with people camping in parks and on a city street. He says officers have seen a shift in the attitude and demeanour of many of the campers and are encountering a new level of aggression, non-compliance and hostility. Manak says two police officers are deployed to assist city bylaw officers, who have been assaulted and chased out of parks, and that people often have weapons because they feel the need to protect themselves.

A doctor in Victoria says she left family practice to become a psychiatrist and now she has a new dilemma — how to treat patients who don’t have the support of a general practitioner. Doctor Martina Scholtens attended a rally at the legislature on the weekend and was among about 200 people calling on the province to improve access to family doctors. Scholtens says she worked in family practice for a dozen years and couldn’t imagine dealing with challenges in the system for another 30 years. The Health Ministry is distributing 118-million dollars in temporary funding to family doctors — about 25-thousand dollars per physician in a practice or a walk-in clinic — to help with operating costs, but that still doesn’t address the shortage of doctors.

Residents of a group home in Kamloops were forced to leave when a fire erupted yesterday afternoon. Captain Jim Gorman of the Kamloops Fire Rescue platoon says the home has extensive structural damage and was not habitable. He says the fire appears to have started at the back of the home around the kitchen area, but a cause had not yet been determined. Three people who were in the home managed to get out and are expected to be moved to another site.

The Chief of Tk’emlups te Secwepemc (teh-KUM’-loops sue-WET’-muck) is excited about the prospect of hosting the 2027 North American Indigenous Games in the area. Kukpi Rosanne Casimir says the First Nation is excited to showcase the region to the thousands of Indigenous athletes, coaches, and team staff that participate in the games every four years. Casimir says she hopes people take pride in the community and within their nation if they can celebrate a winning bid, which is expected to be announced next July during the closing ceremonies of the 2023 games in Halifax. The games feature eight days of competition in up to 16 sports, including  baseball, basketball, lacrosse, soccer, swimming, and wrestling.