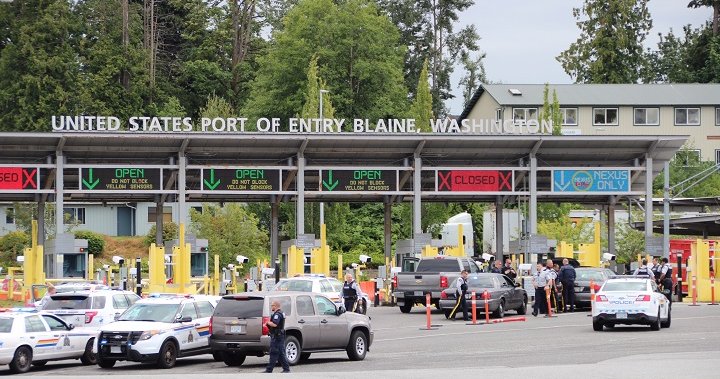 By JaclynSeptember 20, 2021News
No Comments

B-C’s education minister says schools are meant to be a safe place — and COVID-19 protesters should leave them alone. Jennifer Whiteside says it’s completely unacceptable for those opposed to COVID vaccines to protest outside of schools. She says those unhappy with the health restrictions should focus their dissatisfaction on government. It comes after a B-C school district said it would lock exterior school doors today after COVID-19 protesters entered several schools last week

Pfizer said Monday its COVID-19 vaccine works for children ages 5 to 11 and that it will seek U.S. authorization for this age group soon — a key step toward beginning vaccinations for  youngsters. The vaccine made by Pfizer and its German partner BioNTech already is available for anyone 12 and older. But with kids now back in school and the extra-contagious delta variant causing a huge jump in pediatric infections, many parents are anxiously awaiting vaccinations for their younger children. For elementary school-aged kids, Pfizer tested a much lower dose — a third of the amount that’s in each shot given now. Yet after their second dose, children ages 5 to 11 developed coronavirus-fighting antibody levels just as strong as teenagers and young adults, Dr. Bill Gruber, a Pfizer senior vice president, told The Associated Press. A second U.S. vaccine maker, Moderna, also is studying its shots in elementary school-aged children. Pfizer and Moderna are studying even younger tots as well, down to 6-month-olds. Results are expected later in the year.

The 36-day campaign comes to an end Monday, as Canadians make their final decisions for the country’s 44th election. Last month, Prime Minister Justin Trudeau called one of the shortest election campaigns, less than two years since the Liberals were reduced to a minority government. This call was faced with criticism from the opposing parties but quickly kickstarted campaigns fueled with big promises and led to some heated debates. Now, it’s up to Canadians to decide.

What you will need to bring to vote at your assigned polling station:

Elections Canada will not ask for proof of vaccination. By now, you should have received a voter information card in the mail. This details where and when you can vote.

He doesn’t know what it will look like yet, but B.C.’s public safety minister says action is coming after anti-COVID-19 vaccine protesters blocked access to hospitals and barged into schools this month. Schools in and around Salmon Arm were forced into a hold-and-secure Friday after protesters opposing COVID-19 vaccines and pandemic policies brought their protest inside the buildings. Earlier in the month, demonstrations against COVID-19 vaccine policies and mask mandates outside a number of B.C. hospitals impeded access for ambulances and patients. Public Safety Minister Mike Farnworth says the province has been looking into its legal options to prevent such actions during protests since the Sept. 1 hospital demonstrations. “We’re looking at what measures might be available to government to ensure this kind of thing does not happen,” he said. “Blocking hospitals and schools is just not acceptable.” While a timeline on possible action has also not been set, Farnworth says all options are on the table, including injunctions and so-called ‘bubble zones’ which would prevent protesting within a certain distance from particular buildings or services.

The White House says that by early November, adult foreign nationals will have to be fully vaccinated against COVID-19 in order to travel to the United States. The announcement is the first clear indication from the Biden administration that it is preparing to ease travel restrictions first imposed in March 2020, at the outset of the pandemic. It is not clear how the new policy will specifically impact travel at the Canada-U.S. land border, where non-essential visitors\ remain prohibited from crossing. The land border restrictions, which have been renewed on a monthly basis since they were first imposed 18 months ago, are set to expire Tuesday. The White House has yet to provide details on which vaccines will be considered acceptable; the Oxford-AstraZeneca shot, widely used in Canada, has never been approved in the U.S. White House spokesman Kevin Munoz confirmed the announced today on Twitter.

Polls are open in much of the country in the first pandemic-era federal election. Elections Canada says almost 6.8-million people cast early ballots, but the majority of the country’s roughly 30-million eligible voters are expected to cast their ballots today. Voters are encouraged to wear masks at polling stations, but proof-of-vaccination rules do not apply even in provinces where they currently exist. Most riding winners should be known at the end of the night, but some close races may not have official winners for several days.

British Columbia health officials announced on Monday that there have been 1,692 new test-positive COVID-19 cases since Friday, bringing the total number of recorded cases in the province to 179,646. In a written statement, Provincial Health Officer Dr. Bonnie Henry and Health Minister Adrian Dix said that there are 5,608 active cases of COVID-19 in the province. Of the active cases, 307 individuals are currently hospitalized, 156 of whom are in intensive care. The remaining people are recovering at home in self-isolation. There were 644 cases between Friday and Saturday, 613 between Saturday and Sunday, and 435 between Sunday and Monday. New cases, as well as total active cases, broken down by health region, are as follows:

There have been 11 new COVID-19-related deaths for a total of 1,899 deaths in British Columbia. Of the new deaths, six occurred in Fraser Health, two occurred in Vancouver Coastal Health, and three were in Northern Health. Health officials in BC also shared data on COVID-19 cases in vaccinated and unvaccinated people:

A smartphone app designed to reduce food waste by connecting consumers directly with businesses that have surplus items has launched in Vancouver. Too Good To Go connects users with local businesses offering “surprise bags” of leftover food that would otherwise be thrown out. Sam Kashani, Too Good To Go’s manager for Canada, says consumers will benefit from getting healthy food. Founded in Denmark in 2016, the app now operates in 15 countries.

R-C-M-P in Burnaby say “many officers” are investigating a shooting near a popular hockey rink. Police say one man suffered non life-threatening injuries on Saturday afternoon in the shooting near the Scotia Barn. Mounties say they do not believe the shooting is connected to the Lower Mainland gang conflict. R-C-M-P are asking potential witnesses or anyone who has dash cam video of the incident to come forward.