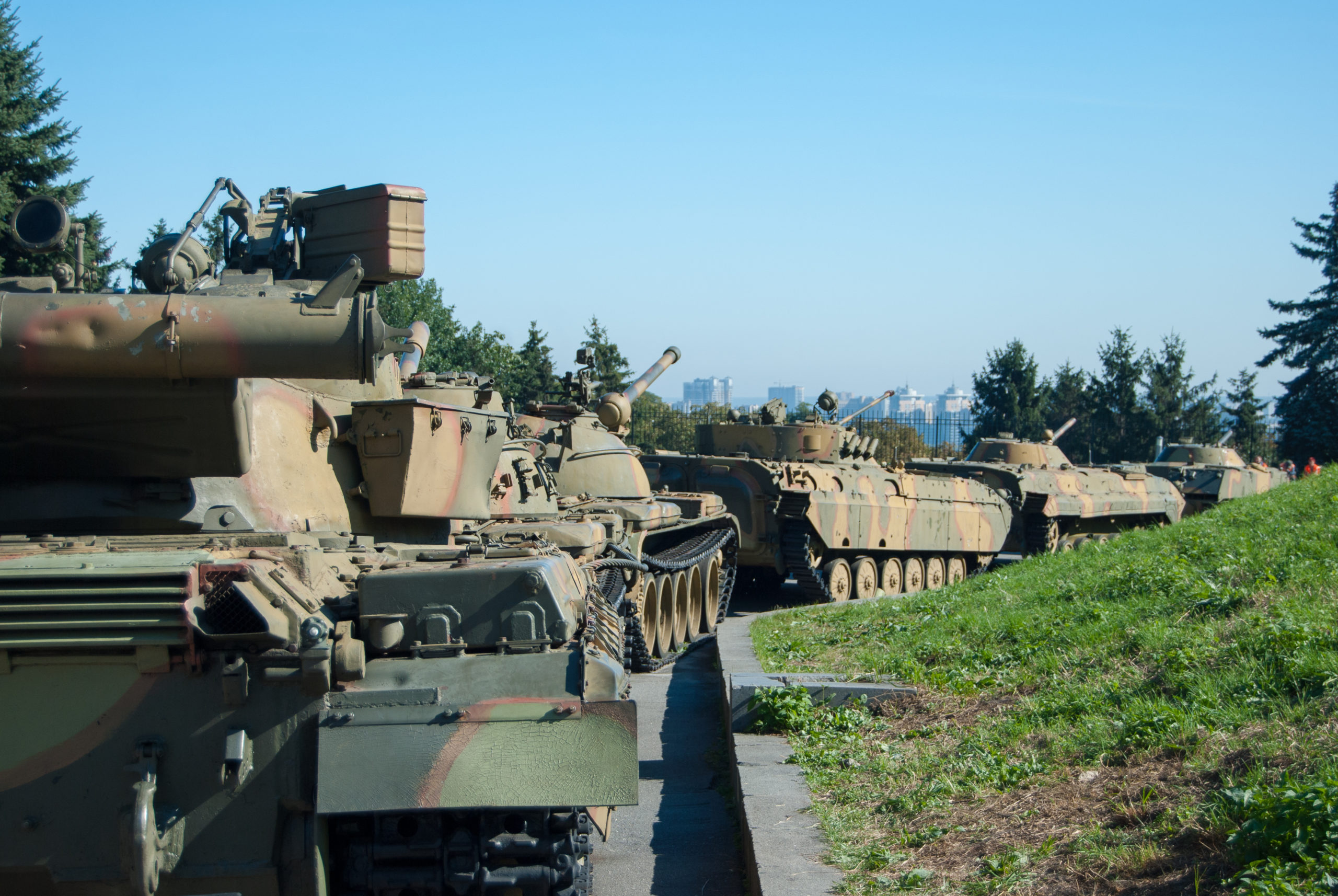 By ScooterFebruary 24, 2022General
No Comments

Russian troops have launched a broad assault on Ukraine from three sides. The military attack began before dawn with explosions in the capital Kyiv and other cities. Ukrainians started fleeing some cities, and the Russian military claimed to have incapacitated all of Ukraine’s air defences and airbases within hours. Ukraine’s leadership said at least 40 people have been killed so far in what it called a “full-scale war” targeting the country from the east, north and south.

The Canadian government has issued updated guidance for Canadians in Ukraine, warning that its ability to provide consular services in Ukraine could become “severely limited,” and that Canadians should not rely on the government to help them leave the country. The government says any Canadians in Ukraine should shelter in place unless it is safe to leave the country. Prime Minister Justin Trudeau is meeting with other G-7 leaders to plan a response to what he’s calling Russia’s egregious attack on Ukraine. Trudeau says the unprovoked actions are a clear violation of
Ukraine’s sovereignty and territorial integrity and that Russia’s actions will be met with severe consequences. UN Ambassador Bob Rae is calling Russia’s attack both a grotesque war crime and brutal thuggery.

President Vladimir Putin chillingly referred to his country’s nuclear arsenal and threatened any foreign country attempting to interfere with the invasion with — quote — “consequences you have
never seen.” The Russian military claims to have wiped out Ukraine’s entire air defences in a matter of hours, and European authorities declared the country’s air space an active conflict zone. The Russian Defence Ministry says it is not targeting cities, but using precision weapons. It and claims that there is no threat to civilian population.

B-C’s provincial health officer says Novavax, a new protein-based COVID-19 vaccine that was approved by Health Canada last week, will soon be available in the province. Dr. Bonnie Henry says it is a good option for protecting those who have had reactions to the current vaccines and will be given in two doses for those aged 18 and older. The province says kits containing five Rapid Antigen Tests will also be available for free at select pharmacies as early as Friday for residents aged 70 and up and those at highest risk of severe illness. The province is reporting 653 people are in hospital due to COVID-19 and 108 in intensive care.

Prime Minister Justin Trudeau says the Emergencies Act he invoked last Monday is no longer needed now that demonstrations in Ottawa and at some border crossings have ended or slowed down. He says while threats remain, police and existing legislation will be enough to prevent other occupations — and so yesterday, he revoked the Act. The three-week-long protest that gripped Ottawa has sparked a call for changes to security in the parliamentary precinct. Ottawa has temporarily closed off Wellington Street to traffic until a new council is elected and the city can work out a new security plan with the federal government.

Researchers are slowly revealing clues about the COVID-19 variant widely known as “stealth Omicron” It is now responsible for more than a third of new Omicron cases around the world, but scientists still don’t know how it could affect the future of the pandemic. Early research suggests it spreads faster than the original Omicron and in rare cases can sicken people even if they’ve already had an Omicron infection. There’s mixed research on whether it causes more severe disease, but vaccines appear just as effective against it.

Ukraine’s president is ordering a full military mobilization to challenge the Russian invasion. President Volodymyr Zelenskyy issued a decree saying the mobilization will last 90-days. Zelenskyy says at least 137 civilians and military personnel have been killed in the Russian invasion of his country. He calls them “heroes,” and says hundreds more have been wounded. Zelenskyy says despite Russia’s claim it is attacking only military targets, civilian sites also have been struck.

Prime Minister Justin Trudeau is accusing Russia’s Vladimir Putin of sparking the greatest threat to European stability since the Second World War. He says the invasion of Ukraine represents an attack on democracy, international law, human rights and freedom. Trudeau made the comments as he announced stronger sanctions against Russia and urged democratic leaders around the world to stand firmly against authoritarianism. Canada is also cancelling existing export permits for Russia, amounting to an estimated 700-million-dollars in trade. Trudeau joined U-S President Joe Biden and European leaders, who also moved to strangle Russia’s financial ability to wage war.

British Columbia health officials announced today that there have been 597 new positive COVID-19 cases, bringing the total number of recorded cases in the province to 346,793. In a written statement, Provincial Health Officer Dr. Bonnie Henry and Health Minister Adrian Dix said that 612 (-41) COVID-positive people are currently hospitalized, and 102 (-6) are in intensive care. The remaining people are recovering at home in self-isolation. New cases are broken down by health region as follows:

There have been nine new COVID-19-related deaths in British Columbia, for a total of 2,840 deaths in the province.

A few hundred people rallied in support of Ukraine in front of the Vancouver Art Gallery today hours after Russian forces entered the country. Natalie Jatskevich (jat-SKA’-vitch), the head of the B-C branch of the Ukrainian Canadian Congress, attending the protest and says she’s disappointed in the slow international response to the conflict. She says they aren’t asking anyone to fight for them, but they shouldn’t be fighting alone. Premier John Horgan said in a statement that he joins Prime Minister Justin Trudeau and allied nations in condemning Russia’s “illegal and unjust war” in Ukraine.

R-C-M-P are asking for the public’s help in their investigation into the attempted robbery of an 88-year-old woman walking down the street in Richmond. Police say the occupants of an S-U-V tried to pull the woman inside the vehicle last Friday and steal her purse –but fled when their attempt was unsuccessful. Corporal Dennis Hwang says it was a “harrowing ordeal” for the Richmond woman, but she was unharmed. Hwang is asking that anyone with information about the incident or anyone with dashcam footage to contact police.

White Rock’s chilly overnight temperatures set a new record for Feb. 23. According to Environment Canada data, the “White Rock area” had its coldest Feb. 23 in decades this week, dipping to -5.5 C – the lowest its been on that date since 1957, when the mercury dipped to -4.4 C. The record was reportedly among several toppled across the province. On the flip side, White Rock’s warmest Feb. 23 in recent history was in 1958, when the day was a balmy 15 C.

Environment Canada says chilly conditions that broke many south coast temperature records over the last few days will persist into Friday. The weather office is maintaining special weather statements for Metro Vancouver, the Fraser Valley and Howe Sound until at least tomorrow morning, warning of overnight temperatures to minus 5C and wind chill values making it feel as cold as -10. A total of 17 records were set across southern B-C yesterday as the mercury hit new lows for the day.

Delta police are warning residents after a local woman fell victim to an alleged distraction theft. According to a DPD Facebook post Thursday morning (Feb. 24), the woman was approached while sitting in the driver’s seat of her vehicle by an unknown man who told her there was something in her back tires. The woman exited her vehicle, leaving the driver’s side door open, to look and found two thumb tacks stuck to her rear tires. She removed the tacks, thanked the man and carried on with her day. “It wasn’t until later on in the day that she noticed her wallet was missing,” the post said. Police say CCTV footage captured a second man entering the woman’s vehicle through the open door and stealing the wallet. Thankfully, the woman contacted police and was able to cancel her credit cards before any fraudulent activity took place. Police say they are investigating the incident, but warn the public to be aware of this type of theft.