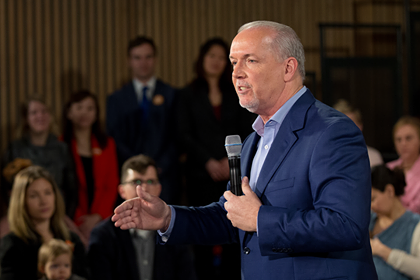 By LeslieSeptember 17, 2020News
No Comments

A website is coming soon to notify parents of COVID-19 cases and exposures within the B.C. school system.  It will be an online resource, similar to the BC Centre for Disease Control’s exposure alert page. The hub website will link to each health authority’s page and include the school, city, date, and type of notification.  The BC Teachers’ Federation says the site is a good start, but suggests the information also be shared in the daily provincial COVID-19 briefing.  There are exposure notifications at seven schools in B.C., with six in the Fraser Health region and one in the Interior….The latest at Princess Margaret Secondary School in Surrey.  B-C reported 122 new cases of COVID-19 and no new deaths yesterday…Sixty people are in hospital … 23 of them in ICU.

The B-C government is expected to reveal how it plans to stimulate our economy in the wake of the COVID-19 crisis later today.  Premier John Horgan and Finance Minister Carole James are set to release details of the province’s 1.5-billion-dollar economic recovery plan a 13-billion-dollar budget deficit is projected for this fiscal year.

There may soon be an alternative to the uncomfortable nasal swab test currently used to test for COVID-19.  Private and public health officials say a lab-based COVID-19 test using saliva is likely to be available this fall.  Testing and laboratory firm Dynacare says it has developed a proven technique that is 98.4 per cent as accurate as the nasal swab method.

While millions of Canadians lost work and went onto emergency benefits because of the COVID-19 pandemic, it seems the country’s top billionaires were doing alright.  A new report finds they added a combined $37 billion to their collective worth.  We’re talking about the really high rollers — the Thomson family added $8.8 billion to its fortune, Lululemon founder Chip Wilson swelled his bank account by $2.8 billion while serial entrepreneur Jim Pattison added another $1.7 billion to his total.

There is growing speculation B.C.’s Premier will hold an early fall election but not everyone agrees former Liberal Attorney-General says he doesn’t think there is a good reason to call one. Despite the fact the law in B.C. states elections are to take place every four years, with the next one scheduled to happen next year, a government can call an early election for a good reason. Several recent polls suggest John Horgan and his NDP are popular right now, although few people are interested in going to the polls anytime soon.

There will be no fans in the stands when Alberta hosts the 2021 world junior hockey championships — two years from now.  The event was originally scheduled to be held in Edmonton and Red
Deer from December 26th of this year to January 5th, 2021, organizers now say the cities will host the tournament minus fans in 2022.  Gothenburg, Sweden, which was slated to host the event in 2022, will now do so in 2024, while Novosibirsk, Russia, will host the 2023 event.

Fraser Health has declared an outbreak at Peace Arch Hospital after evidence of transmission in a Rehab unit. One patient in this unit has tested positive for COVID-19. The outbreak is limited to one unit, which is temporarily closed to admissions. Upon declaring the outbreak, Fraser Health immediately implemented precautions, including enhanced cleaning, as well as contact tracing to protect the health of all staff, medical staff, and patients. The emergency department at Peace Arch Hospital remains open and there has been no impact to any other areas of the hospital.
Fraser Health has notified all patients on the affected unit about the outbreak, and in addition, have informed the families of patients who are unable to share this information. Peace Arch Hospital is working with essential visitors to the affected unit on a case-by-case basis.

B-C is reporting a single-day record of 165 new cases of COVID-19. Provincial health officer Doctor Bonnie Henry says there has also been one death of a long-term care resident — bringing the total to 220 fatalities. She is urging people to get ready for the coming respiratory season by keeping to their same “safe six” social circle.

‘Ukrainian soul food’ fundraiser returns to Surrey hall, with a twist. The dine-in option is on the backburner for now, but planners of a monthly fundraiser at Surrey’s Ukrainian Cultural Centre have found a way to keep the event going in these pandemic times. The church group’s monthly “perogy supper” events are popular with Surrey-area people looking for homemade Ukrainian food.
Both hot-to-go and freezer-ready takeout orders of Ukrainian “soul food” – perogies, cabbage rolls and borsch – will be available again on Friday, Sept. 25, from 4:30 to 7:30 p.m. at the hall in Whalley.

British Columbia is introducing a new saline gargle test for students from kindergarten to Grade 12 to help make it easier for young people to check whether they have COVID-19.
Provincial health officer Bonnie Henry says B-C is one of the first places in the world to use a mouth rinse gargle test for the virus. Doctor Henry says the test can be done without a health professional by parents or children themselves.