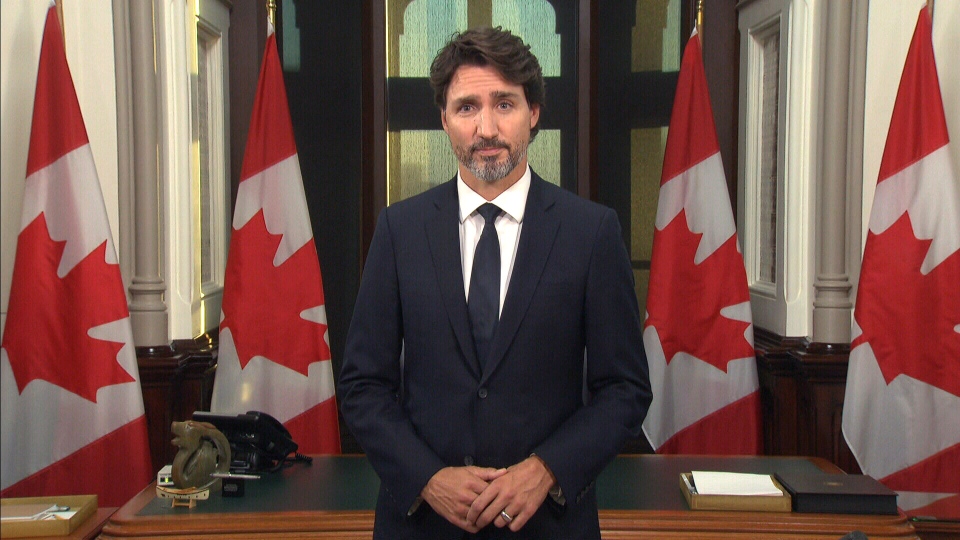 By LeslieSeptember 24, 2020News
No Comments

The prime minister made a rare televised address last night to break the bad news to Canadians — the second wave of COVID-19 is already underway.  Justin Trudeau also admitted that the dramatic rise in COVID-19 infections across the country won’t be stopped in the next few days or weeks.  Instead, he says Canadians can change how things look next month, and into the winter, by sticking with what worked before — obeying public health instructions, wearing masks and using the government’s exposure-alert app.

We should find out today if there will be a federal fall election, as parliament resumes and M-Ps vote on yesterday’s throne speech. When it comes to supporting the Liberal’s throne speech, the Conservatives have said no, and so have the Bloc Quebecois.  But that doesn’t mean the minority government will fall — as long as they can secure the backing of the N-D-P.  Yesterday’s throne speech included promises of big spending to target COVID-19 and help those in economic jeopardy because of the pandemic.  But whether it is enough to lure the New Democrats on side remains to be seen.

Surrey’s new police force is already proving to be a hot-button issue in this provincial election as NDP Leader John Horgan distances himself from the transition.  Horgan says Mayor Doug McCallum opened up a “hornets’ nest” with Surrey’s transition from the RCMP to a municipal police force, adding that any action taken will be the responsibility of the Mayor.  The Surrey Board of Trade says it’s going to be a very controversial issue throughout this election campaign adding, “it’s not too late” to stop the transition, especially since the pandemic has impacted the economy.

Two of the three main party leaders are set to deliver speeches today at the Union of B-C Municipalities convention.  Speeches by N-D-P leader John Horgan and Green Leader Sonia Furstenau to local politicians were scheduled before the election call.  Liberal Leader Andrew Wilkinson spoke to delegates yesterday, criticizing Horgan and claiming the N-D-P delayed the announcement of the COVID-19 economic recovery plan to boost their election efforts.  Despite an election originally scheduled for 2021, Horgan says he needed political stability and called a vote for Oct. 24.

The minority government looks poised to survive a confidence vote on its throne speech. The Liberals have introduced legislation that includes a package of three COVID-19 benefits and an expanded employment insurance program. N-D-P Leader Jagmeet Singh would not immediately endorse the throne speech. But he does hail the bill reforming the employment insurance system  as a — quote — ”big victory” for New Democrats and the people they fight for.

A staff member at Peace Portal Seniors Village has tested positive for COVID-19. A Fraser Health rapid response team is at the site and communication with residents and families is underway.
Peace Portal Seniors Village is a long term care facility in Surrey that is owned and operated by Retirement Concepts. The staff member is currently in self-isolation at their home.
Enhanced control measures have been put in place at the site. Fraser Health is working with staff to identify anyone who may have been exposed and is taking steps to protect the health of all staff, residents and families.

B-C is reporting 148 new cases of COVID-19 as well as two more deaths. Provincial health officer Dr. Bonnie Henry says both deaths were in the Fraser Health region and she also revealed an Indigenous elder died last weekend in the northern region. Henry acknowledged it’s taken some time to develop a consistent reporting system of all cases in schools and says she has full confidence in reporting by Vancouver Coastal Health. She also says that despite revealing earlier that she has been getting some threats, she is getting far more messages of support.

The number of COVID-19 cases across our province continues to be too high.  Dr. Bonnie Henry says everyone needs to follow the proper safety guidelines to ensure businesses and communities can remain open.  B.C. announced 91 new COVID-19 cases yesterday but no new deaths.

The COVID-19 pandemic is proving more difficult to navigate for working mothers, who are left to balance caring for the children and managing the demands from their jobs.  One expert says the impacts are being felt the most by women.  Women, in general, were more likely to lose their jobs in the spring as a result of COVID because they dominated sectors like retail and hospitality.  Now, there’s evidence that moms who are in the workforce are more likely than fathers to be leaving their jobs, whether that’s for homeschooling or needing to be at home.  There is now a call that with the added pressures, more needs to be done to offer better supports to women who may be overwhelmed amid the pandemic.

A White Rock resident says the “tacky” lightshow displayed on the city’s iconic pier is a distraction and doesn’t do the city any favors. Buena Vista Avenue resident Len Doray, who contacted Peace Arch News this month, also brought his concerns to the city and Coun. David Chesney. Both indicated to him that the issue is being looked into, he said.
City of White Rock CAO Guillermo Ferrero told PAN in a statement Tuesday that the city is “looking at changes to the system of managing the Pier lighting, including colours, brightness and other factors.” Doray said he has no issue with the lights being used to celebrate special occasions such as Pride Week, Christmas, Valentine’s Day, “but not every night, and certainly not all night.”

The general public won’t be allowed to attend the Remembrance Day ceremony at Veterans Square in Cloverdale this year. “Unfortunately, the public is not invited. It’ll be a private event only,” said Earle Fraser, service officer for the Cloverdale Legion. “We’re restricted to a maximum of 50 people on site.” He said Legion reps will lay wreaths and they will have a few representatives on hand to lay 10 other wreaths, such as those for the Silver Cross Mothers, the provincial government, the City of Surrey, and the RCMP. Fraser said representatives for those groups will push their numbers well above 40. “Poppies will be available. Wreath sales will be normal.” Fraser said if anyone buys a wreath from the Legion, the Legion will deliver the wreath to their work or home so they can display it.