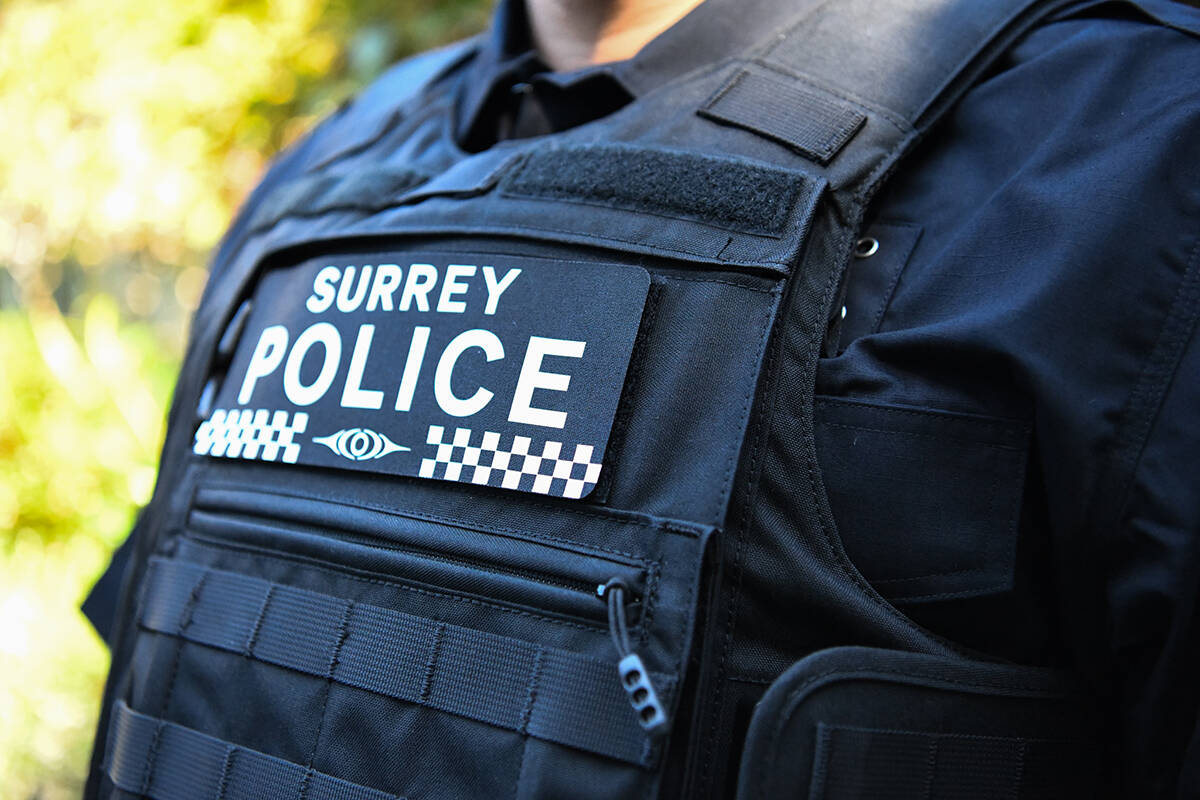 By Jeremy TubbsJanuary 24, 2023News
No Comments

The Surrey Police Service says it has deployed 18 more constables even as the service might be about to end. The police service says the new constables bring the total number of officers who have been deployed to 205, and they come from various police agencies. The new hires are in place as Surrey council is in the process of asking the province to allow them to reverse plans for a municipal police force and return to the RCMP. The Surrey Police Service says while it waits for a decision from the public safety minister, the transition plans will continue.

RCMP say a suspect has been taken into custody following a fatal stabbing outside the Port Place Mall in Nanaimo. Police say a person was taken to hospital last night after they walked into the mall with an apparent stab wound after being attacked in the parking lot. They say emergency crews and some bystanders provided emergency first aid but the victim was later pronounced dead in hospital. Constable Gary O’Brien says the investigation is in the early stages and it’s too early to say if there was any relationship between the suspect and the victim but there is no further risk to the public.

A new provincial anti-racism action plan launched today for students in kindergarten through Grade 12. Education Minister Rachna Singh says the aim of the plan is to empower students and educators to identify and take action against racism and discrimination in BC schools to make them more inclusive for racialized students, staff and families. It will provide new incident-response guidelines as well as training opportunities for all school staff to help them better understand their role in fostering anti-racist school environments. The province says the action plan was developed through discussions over three years with students, rightsholders and Indigenous partners, education partners, educators and staff, as well as community organizations.

Police in BC’s Lower Mainland are appealing for the public’s help identifying a suspect in a Saturday afternoon stabbing and robbery. They say officers responded to a call about a man suffering from numerous stab wounds who had been robbed near the parkade at the Shops at New West mall, and they treated him until paramedics arrived to take him to hospital. A statement from Sergeant Justine Thom says the attack appears to have been unprovoked, with no apparent connections between the victim and the assailant, and anyone with information is asked to call police in New Westminster. Police describe the suspect as a white man between 20 to 39 years old, standing no taller than five-foot-seven with short hair and a medium build, and they say he was wearing a white jacket with a black backpack.

A Kamloops-initiated plan to get land trusts more involved in solving the housing crunch in BC and the rest of Canada has reached a milestone. A petition to the federal government spearheaded by Colin O’Leary, a member of the Kamloops Chamber of Commerce, has surpassed the 500 signatures needed to have it certified and presented to the House of Commons, forcing a response. At issue are tax code changes that would eliminate capital gains taxes on land that people or corporations donate to a community land trust. O’Leary says the proposal mirrors an existing program that provides a tax credit to those who donate land to an ecological reserve.

A man who dug fossilized dinosaur footprints out of a protected site in northern BC has been sentenced to 25 days in jail and handed a 15-thousand dollar fine. A provincial court judge described the damage at the Six Peaks Dinosaur Track site near Hudson’s Hope, saying the man and three others had used power tools to remove dinosaur tracks from the site over more than two hours in 2020. The man was charged under the province’s Land Act, pleading guilty to one count of unlawfully excavating on Crown land and expressing remorse for his actions — although the stolen fossilized footprints have not been recovered. Judge Darin Reeves’ sentencing decision describes the site as one of the most important in North America, with tracks representing a diversity of dinosaurs.