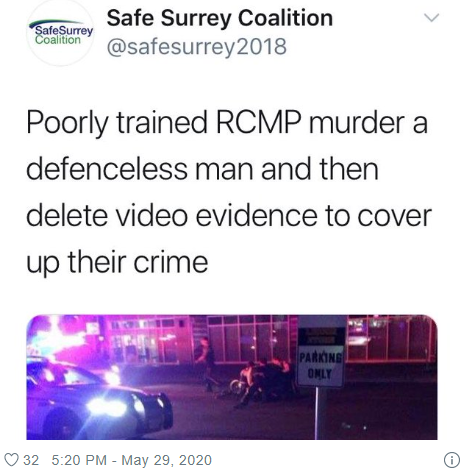 By Vanessa YbarraJune 2, 2020News
No Comments

A B-C wide warrant has been issued for a 19 year old Surrey man  – Dyllan Petrin broke off his electronic ankle bracelet earlier this week, took off and hasn’t been seen since. Petrin was released from jail in February and ordered to wear the bracelet – following his involvement in a kidnapping and assault case.

Almost 50-thousand dollars has been raised for the family of the man killed at a CN railyard in Surrey yesterday – there’s still no word on what led to 31 year  Jasvinder Riar’s death – leaving behind a wife and nine month old son.

They have beautiful mountains – and now you can drink beautiful brews in North Van! The city is the first in BC to allow drinking alcohol in public places such as parks – adding with many people too nervous to host friends in their backyard, parks have become the “go to” place, so why not allow for a few brewskies!

The state of Minnesota filed a human rights complaint Tuesday against the Minneapolis Police Department in the death of George Floyd after an officer pressed his knee into Floyd’s neck for nearly nine minutes, killing him.

Doug McCallum’s ‘Safe Surrey Coalition’ is in hot water after posting a tweet accusing RCMP of murdering a Prince George man back in 2017 – then quickly taking it down. According to media reports, McCallum said an  “unauthorized person” was to blame for the post.

So much for a peaceful supper!
Monday night people in Port Kells heard gun shots near 192nd and 80th Avenue -“several” people were arrested in front of a home – but RCMP say they don’t believe any shots were actually fired.

Too cool or too scared?
Only 14% of gr.12 grads returned to highschool yesterday – grade 6 students had the highest return rate at 50%.

Surrey minor sports organizations are struggling with refunds, registration, restrictions, potential rule changes and other issues as they await approval to return to play.

The brews won’t be flowing this August – the Clover Valley Beer Festival that was set to happen August 8th cancelled due to a ban on large crowds. All tickets will be refunded.

Flower lovers rejoice! Darts Hill Garden Park in South Surrey has re-opened. The park is open Thursdays, Fridays and Saturdays from 11 a.m. to 3 p.m., visitors will need to pre-register for a 1.5-hour time slot.

Come again? Liberal Leader Andrew Wilkinson is asking the province to clarify what they mean when they say daycares are doing “a daily ‘screening’ of children”.

Facebook and Instagram users are sharing images of black squares today in solidarity with black victims of police violence.
If you took part in an anti-racism protest, Dr. Bonnie Henry is urging you to self monitor for the next few weeks to make sure you don’t have COVID –  stressing it’s still too early for large gatherings.
She reported one new death and 24 new cases since her last update.
But really, it’s the hair. A new survey shows 40 per cent of Americans say Trudeau is a better leader in the pandemic compared to 30 per cent favor for Trump.
Anti racism and anti police riots have rocked much of the U.S for a week now – Trump threatening to deploy the military unless the states halt the violence – at the same time officers use tear gas to clear Trump’s path – through a peaceful protest.-  to a church for a photo opp.
Share Tweet Share Pin