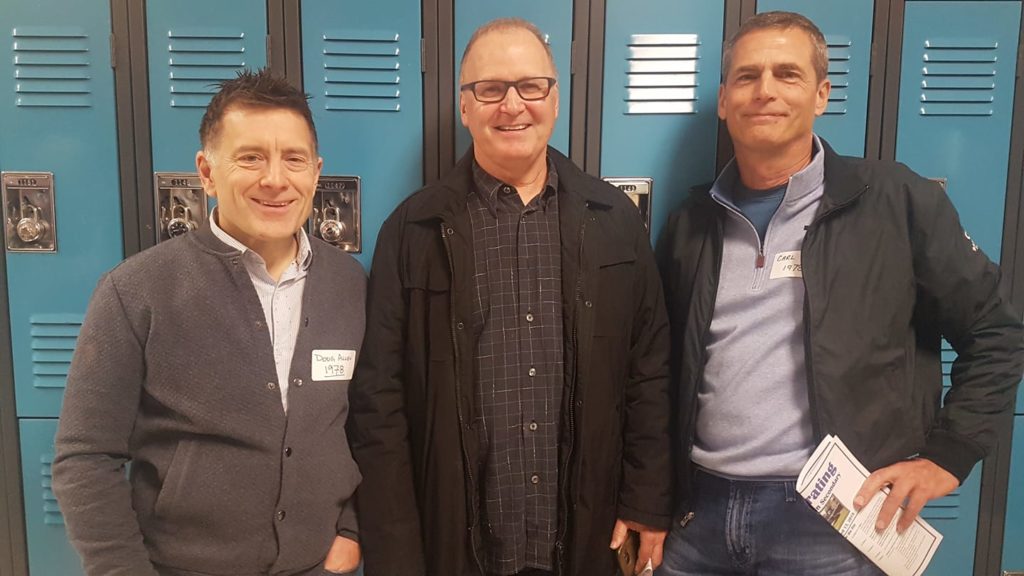 By Vanessa YbarraApril 15, 2019Community
No Comments

There’s a lot of celebrating to be had for forty years.

And that’s exactly what grad and teacher alumni, students, parents and current faculty staff did at R.E. Mountain Secondary School on Saturday to look back on the more than 40 years of memories seeped into the Willoughby schools walls.

The celebration was in light of a bigger, brand-new school currently being built next to the current school at 7755 202a Street,  that come September all of its approx. 1300 students will transfer to to accommodate the rapidly expanding Willoughby area that’s only expected to keep growing as more condos are built in the area.

Peter Ewart Middle School will take over the old school built in 1977.

New school being built adjacent to old one

Vice-Principal Paul Trattel who ironically graduated from R.E. Mountain Secondary himself in 1990, says he has great memories of the place he now calls work.

“I was one of those guys actively involved in everything from athletics, rugby, music  theatre, band, you name it,  this is really where my love of volunteerism began.”

While bittersweet, the Langley resident said the move is more than overdue.

“We currently have more than 20 portables on site. Being able to have everyone in one space once again is going to be awesome. There’s going to be a ton of open spaces, lots of glass, it’s just a beautiful building. As well, unlike most buildings that have departments in certain areas, go down this wing it’s your science department, that wing is your tech department, the new building is all mixed up and we did that on purpose because we wanted to see how much cross-collaboration we could get going on.”

Hundreds of grad alumni of all ages showed up to Saturday’s event to re-live the memories of their high school years, including Langley resident Doug Allen who was part of the first graduating class of 1978.

“It was really exciting. Langley back then was a very small place back then, nothing ever happened in Langley. In that year, we got our first Mcdonalds and a brand new school so we had two years of being the oldest students, which created a tremendous amount of spirit. I just remember a lot of great times with a great bunch of people.”

For friend Kevin, who also graduated in 1978,  it was the ‘newness’ of the school that was so exciting.

“Everything we had was brand new. The basketball uniforms had never been touched, all of us had lockers on both floors cause there were so many more lockers than students. It was pretty cool. I haven’t been back in 41 years, it was fun walking in, looking at the gym and the staircase, quite a bit has changed.”

Doug Allen, Kevin, and Carl Hoyt from the Class of 1978

Then there’s Lee Wood, whose best memories were crushing it on the rugby field.

“Rugby was so huge for me. Just a lot of fun memories, basketball, volleyball, you name it we played it.”

Wood says a lot of alumni still keep in touch on Facebook but she still felt the need to come down, with all eyes now on the new beautiful building expected to open in September.

Past and present graduates collide!