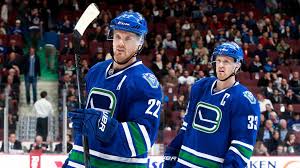 School’s Out For The Sedin’s

By The WebmasterApril 2, 2018Community, News
No Comments

Long-suffering Vancouver Canucks fans were saddened, but not surprised when Daniel and Henrik Sedin announced today that this will be their last season playing for the team. Who knows what is really going through their minds and whether or not it was truly their decision? What does it matter? The Sedin twins have been remarkable hockey players and ambassadors for the city. So much of what they did off the ice will never be known, but suffice to say they loomed as large as they are generous. Over the years I have had the good fortune to meet both Sedins on a number of occasions and from the moment they enter a room, it becomes obvious why they are as popular as they are off the ice as they are on. These guys have charisma by the truckload. They are smart, charming, genuine and humble. The same can not as easily be said of many players today in professional sports. Daniel and Henrik have always been high achievers as players and both are winners of multiple awards, but the big one, the Stanley Cup, sadly has eluded them. While they have said they will stay in Vancouver it is not immediately clear what the future holds for these guys who are only 37 years old in the real world. One can’t help but wonder if they will stay with the Canucks in some capacity or move onto something completely different. Regardless, I’ll leave the speculation and even their contribution to the game to others better educated than me, but I would like to say to both Henrik and Daniel thank you! Thank you for your incredible talent as players and your immeasurable contribution to the community. You guys are the real deal. Gentlemen, you are the class!